The natural gas "subsidy" for US consumers

The biggest contribution to global energy subsidies come from the largest oil producers themselves, especially from the Middle East. However, countries like Saudi Arabia strongly contest this as an energy subsidy. They argue that they are selling at their cost of production, which is far less than the prevailing global oil price, and therefore incurring no loss or subsidy on the sales.

It is tempting to extend the logic to America's gas pricing. The global natural gas price, as reflected in the UK's NBP and Japan's JCC (admittedly for LNG), are far higher than the US's Henry Hub price. The recent spurt in US gas production from underneath shale formations has driven down prices in North America, whereas gas prices continue to remain indexed to oil prices in remaining parts of the world. This coupled with regulatory restrictions that deter the construction of LNG terminals off US coast for exports are the major contributor to this market fragmentation. 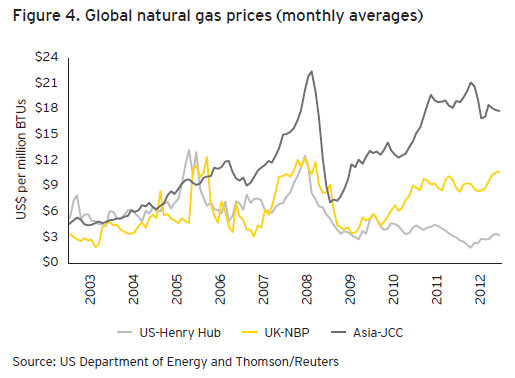 Imagine a Saudi Arabia which has banned oil exports and ring-fenced a domestic oil market where the price is $10 per barrel when the prevailing global market price is $80 per barrel. The fragmented natural gas market has some similarities to this hypothetical oil market. Instead of being priced at the marginal cost of the most expensive gas field, the North American natural gas consumers enjoy a price which is linked to the marginal cost of production from the least expensive source. Is the price differential a subsidy enjoyed by North American gas consumers?
Posted by Urbanomics at 5:58 AM