The wages of fiscal austerity

Martin Wolf has a nice graphic that captures the correlation between fiscal tightening (defined as the percentage point change in the structural or cyclically-adjusted general government deficit) and GDP growth rates in the 2008-12 period across Eurozone. 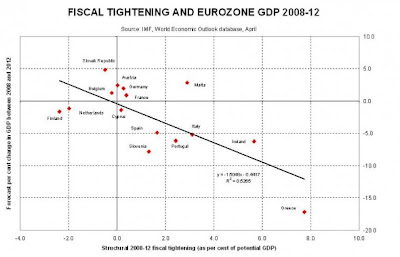 The voices demanding an end to austerity are growing louder. In a hard-hitting op-ed, Lawrence Summers has argued that austerity is a misdiagnosis of Europe's problems,

Europe has misdiagnosed its problems and set the wrong strategic course. Outside Greece, which represents only 2 per cent of the eurozone, profligacy is not the root cause of problems. Spain and Ireland stood out for their low ratios of debt to gross domestic product five years ago with ratios well below Germany. Italy had a high debt ratio but a very favourable deficit position. Europe’s problem countries are in trouble because the financial crisis under way since 2008 has damaged their financial systems and led to a collapse in growth.High deficits are much more a symptom than a cause of their problems.

Treating symptoms rather than causes is usually a good way to make a patient worse. So it is in Europe. Its financial problems stem from lack of growth. In any financial situation where interest rates far exceed growth rates, debt problems spiral out of control. The right focus for Europe is on growth. In this context increased austerity is a step in the wrong direction.

Furthermore, he suggests that austerity is worsening Europe's problems,


When economies are constrained by demand and safe short-term interest rates are near zero, policy measures that reduce the deficit by 1 per cent have a multiplier of 1 to 1.5. This implies a 1 per cent reduction in a country’s ratio of spending to GDP or an equivalent tax increase reduces its GDP growth rate by 1 to 1.5 per cent.

This means austerity measures at the national level are likely to be counterproductive in terms of creditworthiness. Fiscal contraction reduces incomes, limiting the capacity to repay debts. It achieves only very limited reductions in deficits once the adverse effects of contraction on tax revenues and benefit payments are taken into account. And it casts a shadow over future growth prospects by reducing capital investment and raising unemployment, which takes a toll on the capacity and willingness of the unemployed to work. These considerations are magnified in Europe as a whole. Slowdowns in one country reduce demand for the exports of others.

Christina Romer points to the need to adopt a twin-track approach to both restoring growth and addressing deficit problems. She advocates front-loaded and immediate fiscal spending to provide the growth stimulus and back-loaded and clearly defined tax increases and spending cuts to reduce the deficts. This has to be coupled with short to medium-term commitment to support these economies with bond-buying programs so as to keep their cost of borrowing and debt-service under control. She points to the successful examples of US in 1983 (with its backloaded Social Security reforms), Sweden in 1995 (to cut its deficit by 8% of G.D.P. over the next three years), and Australia in late nineties.

Happily, as the wages of austerity become clearer and more bitter, there appears to be some realization in Europe that the current path is unsustainable. However, the biggest challenge will be with breaking the entrenched German belief in fiscal adjustment. This becomes all the more formidable given the magnitude of fiscal transfer and monetary accommodation required.

Ezra Klein points to this graphic that highlights how austerity in UK is failing. Since 2010, when the David Cameron government introduced its austerity policies, the economy appears to have hit a wall. 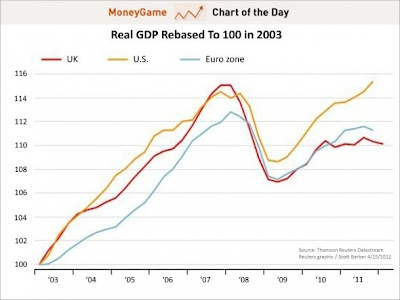 Posted by Urbanomics at 6:42 AM