The impact of China's currency manipulation on emerging economies

The Times points to a recent IMF working paper which suggests that the era of high current account surplus driven external imbalance of the Chinese economy may be coming to an end. The IMF estimates that China's current account surplus, which topped 10% of GDP in 2007, had  shrunk to about 2.8% in 2011 and is estimated to decline to 2.3% in 2012, the smallest since 2001.

Apart from rising labour costs and the natural shift upwards in the manufacturing value chain, the appreciation of the renminbi over the past decade too has been a contributory factor. Since June 2005, but for period of nearly two years during the 2008 financial crisis, China has allowed the remnminbi to trade in a daily band of 0.5% against the dollar. Since mid-April, 2012, it widened the band and now allws the renminbi to fluctuate up or down in value by as much as 1 percent against a fixed benchmark with the dollar during daily trading. But the central bank continues to set the benchmark for each day’s trading of the renminbi, and it has shown virtually no change this year.

The FT has an excellent interactive graphic that traces the change in the value of renminbi since 2000. It uses four distinct ranges, beginning with before China's WTO entry (January 2000), its first depeg from US dollar (June 2005), its second de-peg from US dollar after re-pegging it during the 2008 crisis (may 2010), and March 2012. The graphic below shows that the renminbi's nominal and real (inflation-adjusted) trade-weighted exchange rates (REER) relative to its major trading partners have appreciated. Further, this appreciation has been higher since June 2005. 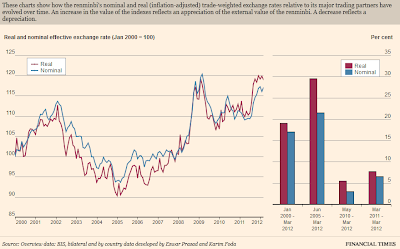 This is also a reflection of the fact that the dollar itself has depreciated against the other major currencies during this period. Therefore, there may be a strong case now for many developing economies that, despite China's exchange rate flexibility since 2005, they are bearing the brunt of China's currency manipulation. 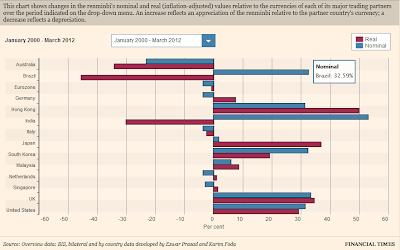 In particular, India has been amongst the worst affected by China's currency manipulation. In real terms, the renminbi has depreciated by 30% since January 2000. In fact, despite, the rupee's significant depreciation against the dollar, the real rupee-renminbi exchange rate has held steady. In fact, but for India's much higher inflation rate, since 2005, the exchange rate between the two currencies has hardly budged.

In keeping with the trend with others, the renminbi has appreciated in real terms over the past one year. However, it may be premature to consider this as a decisive shift in China's exchange rate policy since this period also conicided with higher than normal inflation in China. 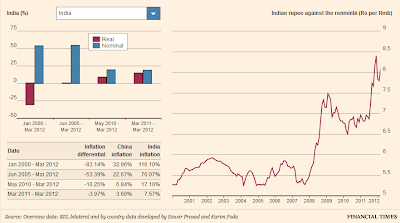 These trends are yet another reason for India to rally other developing countries around an agenda that focuses on China's currency manipulation and its beggar-thy-neighbour impact on other emerging economies. Apart from its substantive nature, this can also add a strategic dimension to India's foreign policy.
Posted by Urbanomics at 7:19 AM

>> India has been amongst the worst affected by China's currency manipulation

This should have been opened up opportunities for Arbitration na?

Just checked & this is the conversion

So, am unable to understand how Chinese Manipulation is hurting India.