John Taylor is wrong on the impact of federal transfers

John Taylor has been a long time critic of the fiscal stimulus measures in the US. In a recent post, he puts forward more evidence to support his claim. He points to his research findings on the impact of temporary transfers to state and local governments in the 2009 stimulus, 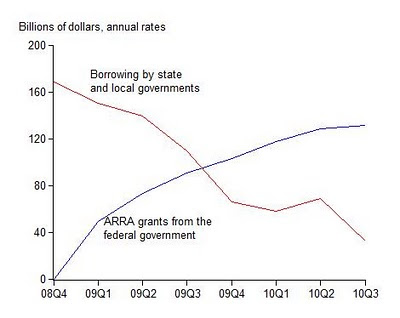 Now, by any objective reading, it is plain incorrect to arrive at this conclusion from the aforementioned research observation. Let me illustrate with the example of Urbania Municipality. In normal times, Urbania's annual expenditure is $100 m, of which $50 m comes from property and other tax and non-tax revenues, $10 m from federal grants, and $40 from different types of debt. The expenditure break-up is $15 m interest repayments, $25 m operation and maintenance, $30 m salaries, and $30 m capital expenditure.

Now recession strikes coinciding with a financial market crisis. Internal revenues fall from $50m to $30 m. Frozen credit markets coupled with a ratings downgrade dramatically increases Urbania's cost of accessing debt. Its net annual borrowing halve to $20 m. Assuming a $100 m annual expenditure and the annual $10 m federal grant, Urbania is left with a $40 m deficit. The only available source of funds is the federal government.

Since interest repayments and maintenance expenditures, amounting to $40 m are unavoidable, without additional external support, Urbania is left with just $20 to pay both salaries and expenditures on new roads and waterlines. Retrenchment of municipal labor and deferring investments are the inevitable result. Replacement of the leaking sewerage line and water lines to the newly constructed housing colony will have to wait for another year.

It is in this context that the federal government decides to step in with an additional $30 m grant to local governments like Urbania. Though, this incremental $30 m will still leave Urbania with a budget spending deficit of $10 m, it is now considerably better off that without it. It will not be able to increase its purchases of goods and services beyond the targetted $100 m. But Urbania will now be able to atleast retain all its workers and even spend $20 m on important infrastructure investments. And the contractionary impact of the recession will be considerably mitigated.

Now substitute Urbania with American states and the flaw in Prof Taylor's sweeping conclusion about the failure of federal transfers in the stimulus package becomes evident. The counterfactual is difficult to construct and the benefits of the intervention even easier to overlook. But it cannot be denied that in the absence of federal transfers, there would have been mass lay-offs, cuts in services, and large-scale postponement of important civic investments. And the effect of all this would be a self-fulfilling downward spiral of declining aggregate demand and decreasing tax revenues.

Is it an ideological blindness that causes eminent economists like Greg Mankiw and now John Taylor to come with such obtuse arguments? Or is it yet another manifestation of the dark age of macroeconomics?
Posted by Urbanomics at 6:30 AM

I am sure that you are onto the article, "Block the Metaphors" in NYT by Krugman.

I am quoting from the article .."But what’s actually happening is that some people are spending much less while nobody is spending more — and this translates into a depressed economy and high unemployment."

"Tax cuts for the wealthy will barely be spent at all; even middle-class tax cuts won’t add much to spending. And the business tax break will, I believe, do hardly anything to spur investment given the excess capacity businesses already have."

My question is this - if the economy is set for lower growth, is a higher dstribution of income the only means to spur growth (Consumption)?

Is a highly distributive/ welfare based / high tax economy a strategic necessity for a low growth economy? ( say like the European model)

If there is no new innovation wave that will set the US back on a high growth path again...(and confound a lot of us)...is this downturn just a matter of the US paying for its past ...profligacy?

Why can't the discourse be in terms of a new equilibrium, where new opportunities for reasonable growth ( and reasonable profits)are to be found in increasing the standard of living - with goods and services targeted at the less profitable but formidably large markets around the world?
(India / Africa/ the MDG)

Is there a bias ....in the discourse of economists towards...growth that conveys glitz!!..? IT / Biotech /entertainment.../ ??

If markets are about catering to needs...and if human resources are regularly "structurally adjusted" to adapt to new needs of the market...why can't this principle apply to countries and their manufacturing / service resources?

( Is there a unsaid dismay in having to adjust "downward" ? )

All that the debate seems to be centered around is the distribution anomaly in the US...its correction through taxes/ distribution... or spurring innovation...purely about reviving consumption in what was a high consumption economy ... that in some sense blew a hole through the worlds wealth( and resources)... by spending its non-existent (bubble fuelled) wealth????

The distribution anomalies and disproportional rewards in the US, particularly in the banking / financial sector ( and in other economies that follow the same pattern) are real - and may need a thorough re-look.

However, is the debate in the US too focused on consumption (demand)strategies alone? ( Like the focus of your post)

Krugman seems to imply that the real problem lies elsewhere.