NYT has this excellent interactive graphic of the executive compensation paid out by the largest Wall Street firms in the 1998-2007 period.

Update 1
In the most cynical manifestation of corporate greed the American International Group (AIG), which has received more than $170 billion in taxpayer bailout money from the Treasury and Federal Reserve, revealed plans to pay about $165 million in bonuses to executives in the same business unit that brought the company to the brink of collapse last year. The bonus plan covers 400 employees, and the bonuses range from as little as $1,000 to as much as $6.5 million. Seven executives at the financial products unit were entitled to receive more than $3 million in bonuses. This evoked strong reaction from the Obama administration, which initated efforts to stop the payment of the bonuses. 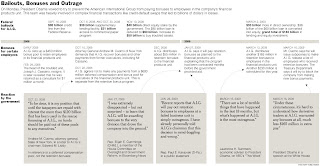 In another shocking example, Citigroup revealed that it gave Vikram S. Pandit, its chief executive, a compensation package valued at more than $38.2 million for 2008, even as the bank posted five consecutive quarters of multibillion-dollar losses and turned to the government three times for help.

Update 2
CEO compensation in top banks of the world compared with their market capitalization for 2008.

Update 3 (25/3/2010)
In their study, "The Wages of Failure: Executive Compensation at Bear Stearns and Lehman Brothers 2000-2008", Lucian Bebchuk, Alma Cohen and Holger Spamann, examined the cash flows derived by the top five executives of the two firms using data from Securities and Exchange Commission filings, and find that, notwithstanding the 2008 collapse of the firms, the bottom lines of those executives for the period 2000-2008 were positive and substantial. They write,

"The firms’ top executives regularly unloaded shares and options, and thus were able to cash out a lot of their equity before the stock price of their firm plummeted. Indeed, the top five executives unloaded more shares during the years prior to their firms’ meltdown than they held when disaster came in 2008. Altogether, during 2000-2008, the top executive teams at Bear Stearns and Lehman cashed out about $1.1 billion and $850 million (in 2009 dollars), respectively.

Combining the figures from equity sales and bonuses, we find that, during 2000-2008, the top five executives at Bear Stearns and Lehman pocketed about $1.4 billion and $1 billion, respectively, or roughly $250 million per executive. These cash proceeds are substantially higher than the value of the holdings that the executives held at the beginning of the period. Thus, while the long-term shareholders in their firms were largely decimated, the executives’ performance-based compensation kept them in positive territory.

The divergence between how top executives and their companies’ shareholders fared raises a serious concern that the aggressive risk-taking at Bear Stearns and Lehman – and other financial firms with similar pay arrangements – could have been the product of flawed incentives. The concern is not that the top executives expected their aggressive risk-taking to lead with certainty to their firms’ failure, but that the executives’ pay arrangements – in particular, their ability to claim large amounts of compensation based on short-term results – induced them to accept excessive levels of risk."