1. Noah Smith has some graphics which capture some disturbing long-term trends in the US. The first is on economic mobility, which has continued to decline alarmingly. 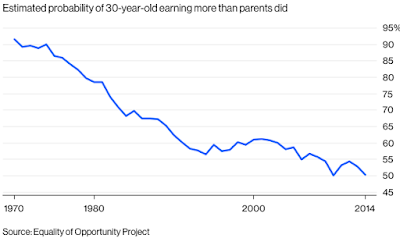 The next concerns the fact that the sub-prime crisis and the Great Recession has completely wiped out the household wealth gains made by the bottom half of the population. 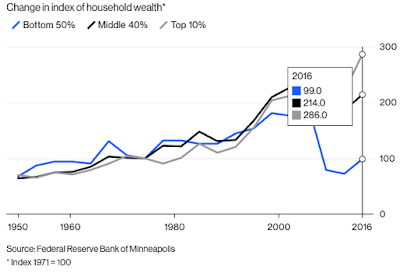 Finally, the real median personal incomes, after rising steadily through till nineties has plateaued off. 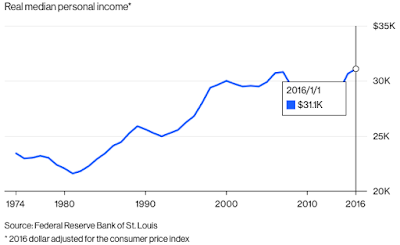 Spread over 573 acres, with 13,000 employees, 19 restaurants, banks, a post office and even its own police force, Rungis is a city within a city, and a global gateway to the Continent and beyond for millions of tons of fresh gastronomic fare... Rungis is an ultramodern market, generating nine billion euros in annual sales (about $10.4 billion). With pavilions divided among the four major food groups, a system for recycling biowaste and a global platform for e-commerce, the operation is so efficient that Moscow, Abu Dhabi and other capitals are recasting their food markets on the Rungis model.

Even Rungis has not been spared the effects of modern trends,

But as competition from Amazon, Google and other online food shopping conglomerates grows, the state-backed company that runs the market, Semmaris, wants wholesalers to move more of their business into the cloud.

Companies are on track to repurchase more than $770 billion in their own stock this year, according to research from Goldman Sachs. That’s more than twice the size of the next largest source of demand, exchange-traded funds, which last year bought $347 billion in shares. 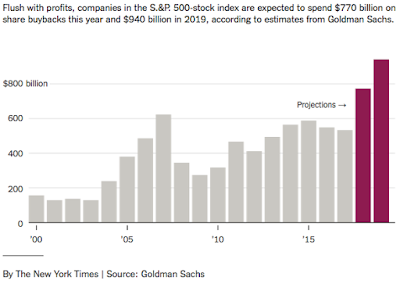 Another risk factor lurking around the stock markets!

4. FT points to the example of BlackRock to highlight the travails of fund management industry. In particular, this graphic about the declining average fee of BlackRock's $6.44 trillion AUM. 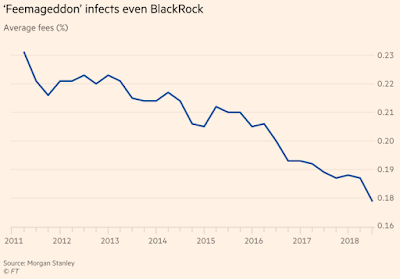 More broadly across the industry,

The average cost of US bond and equity funds has slipped from 0.76 per cent and 0.99 per cent of the investment respectively in 2000 to 0.48 per cent and 0.59 per cent last year, according to the Investment Company Institute.

5. Saudi Arabia and the power of business interests,

In the last decade, Saudi Arabia was awarded $138.9 billion in potential military contracts under the United States’ Foreign Military Sales rules, according to the Congressional Research Service... Companies like BAE and Thales of France have also profited handsomely, as European defense companies exported €57 billion worth of armaments to Riyadh between 2001 and 2015... The kingdom bought around $20 billion worth of American products last year, including Ford autos and Boeing jets. Riyadh also sealed $15 billion in deals with General Electric for goods and services in areas like power generation, mining and health care. And the oil giants can’t possibly walk away from one of the world’s biggest producers...

Saudi Arabia became the biggest source of capital for American start-ups last year. Saudi Arabia’s Public Investment Fund recently invested $1 billion in Lucid, a competitor to Elon Musk’s Tesla car company, and $3.5 billion in Uber. Crown Prince Mohammed bin Salman has pledged $45 billion to Japan’s SoftBank Vision Fund for technology investments intended to help modernize the oil-dependent Saudi economy by 2030. The kingdom has been signing deals for futuristic buildings, AMC movie theaters and swank French hotels as part of a $500 billion blueprint for Neom, a modern city to rise from the desert by 2025. Riyadh is exploring nuclear energy deals to help power it all in anticipation of the day when the oil wells run dry... The kingdom has generated about $1.1 billion worth of fees for banks since 2010 in a variety of deals, including mergers and acquisitions and the arranging of loans and bonds, according to data from Dealogic. The biggest quarry is Saudi Aramco, the world’s largest oil producer, as it prepares to list itself on public stock markets in anticipation of raising over $100 billion... Saudi Arabia has also showered billions of dollars on private equity firms so they can strike deals. The kingdom has pledged to provide up to $20 billion for a $40 billion infrastructure investment fund run by Blackstone, which had its first deal close this year.

China’s government on Friday reported that the economy grew by 6.5 percent over the three months that ended in September compared with a year ago. While fast by global standards, the pace is China’s slowest since early 2009, during the depths of the global financial crisis... The currency has weakened and is hovering near a 10-year low against the American dollar... In a report this week, S&P Global estimated that China’s local governments are carrying as much as $6 trillion in shadowy debt off the books. That is equivalent to roughly three-fifths of China’s entire economic output... Officials are beginning to encourage new investment. They have added more money to the financial system. To reduce the bill, they are asking the private sector to help out. This week it announced that 1,222 infrastructure projects worth $362 billion would be financed by private companies... The trade war could shave as much as 1.6 percent off China’s economic growth figures next year, according to a recent report from the International Monetary Fund.

The restrictions placed recently on the shadow banking sector, a critical contributor to credit growth, does not help with economic growth.


All this comes on top of the battered stock markets, where the Shanghai Composite has plunged to a four-year low. And if the renminbi touches 7 to a dollar in the coming weeks, like with the Indian Rupee after it breached 70 to a dollar, there could be rapid subsequent declines.

And we have no idea how the debt overhang will play itself out. Sample this,

Chinese corporations now hold dollar-denominated debt of roughly $450bn, compared with almost none in 2009. A more hawkish Fed means trouble for such borrowers. Since 2014 the dollar has risen by nearly 25%, on a trade-weighted basis, buoyed by a stronger American economy and rising interest rates. A dearer dollar makes life difficult for those with local-currency assets and dollar debts.

7.  How the world's richest companies are fighting to avoid paying taxes to local governments and discharge their civic obligations.

For months, technology companies in San Francisco have fought a local ballot proposition that would impose taxes on corporations to fund initiatives to help the homeless... The extra money from the proposition could total $300 million a year and would effectively double the city’s budget for addressing homelessness... The measure is designed to fund short-term shelters, permanent housing and mental health services for the homeless with a gross receipts tax and a payroll tax on companies above a certain size. The city estimated that nearly half of the businesses that would be affected by the tax are in tech and finance... In Seattle, Amazon objected in May to a city tax that would have funded services for the homeless. After intense opposition, Seattle officials scuttled it... In San Francisco, some tech companies, including Mr. Dorsey’s Twitter, used tax breaks in 2011, which the city offered to keep them from moving away. In 2012, San Francisco also adjusted its tax code by switching from a payroll tax to a gross receipts tax, a change that favored the tech industry, which spends extravagantly to recruit top engineers.

Many leading Tech companies and their executives have pledged donations to the campaign to defeat the Proposition C vote in San Francisco. 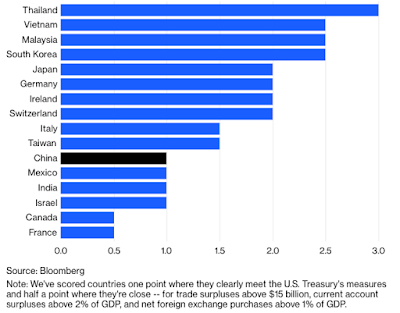 9. Ananth sends link to this article in Atlantic about the world of dynamic pricing in online shopping that is verging on Heisenberg's uncertainty principle!

The right price—the one that will extract the most profit from consumers’ wallets—has become the fixation of a large and growing number of quantitative types, many of them economists who have left academia for Silicon Valley... The price of a can of soda in a vending machine can now vary with the temperature outside. The price of the headphones Google recommends may depend on how budget-conscious your web history shows you to be, one study found. For shoppers, that means price—not the one offered to you right now, but the one offered to you 20 minutes from now, or the one offered to me, or to your neighbor—may become an increasingly unknowable thing.

It’s built to manage consumers’ perception of price. The software identifies the goods that loom largest in consumers’ perception and keeps their prices carefully in line with competitors’ prices, if not lower. The price of everything else is allowed to drift upward... In one instance, Boomerang monitored the pricing shifts of a popular Samsung television on Amazon over the six-month period before Black Friday. Then, on Black Friday itself, Amazon dropped the TV’s price from $350 all the way to $250, undercutting competitors by a country mile. Boomerang’s bots also noticed that in October, Amazon had hiked the price of some HDMI cables needed to connect the TV by about 60 percent, likely armed with the knowledge, Hariharan says, that online consumers do not comparison shop as zealously for cheaper items as they do for expensive ones.

The article also highlights how one-price (instead of price haggling at each transaction) was one of the major innovations of our times which dramatically transformed the efficiency of retail and its scalability. Discounts and coupons offered a way for consumers to still be able to retain the sense of getting a "better value".

10. The Economist on the China-US relations. This is the important thing,


America is undergoing a deep shift in its thinking about China on right and left alike. There is a new consensus that China has a deliberate strategy to push America back and impose its will abroad, and that there needs to be a strong American response. The coalition takes in conventional free-traders in the White House as well as the zero-summists in Team Trump and the national-security hawks in Congress. Pentagon chiefs and the bosses of spy agencies have framed China as the greatest threat to America’s security, requiring a “whole of government” response. In civil society, the coalition includes religious conservatives, human-rights advocates, labour unions and old-school protectionists.

11. Finally, in the backdrop of low-inflation and low interest rate world, The Economist calls for a revisit of the dogmatically followed thinking about central bank independence!
Posted by Urbanomics at 2:03 PM