1. Is there a bigger endorsement of the death of PPPs and the return to nationalisation than this,

A recent poll by the Legatum Institute found that 83 per cent of respondents favoured renationalising the water industry that Margaret Thatcher, then prime minister, sold in 1989. For energy and the railways, 77 per cent and 76 per cent respectively backed the reversal of their privatisations.

Another interesting snippet from the article is that three-quarters of UK's train operating companies in the 20 franchises are foreign state-owned firms. 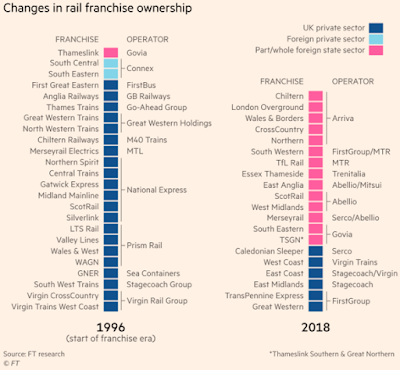 Talk about privatisation of rail in one country to public operators of other countries! Are the most efficient rail operators state-owned?


2. Rajan Govil's assessment of Indian economy is not very promising.

The government’s expenditure policy does not appear to be conducive to increasing investment or potential GDP in the near or medium term. The central government’s overall capital expenditure declined from 1.9% of GDP to 1.6% of GDP in 2017-18 and is expected to stay at 1.6% in 2018-19 at a time when investment has stagnated. Additionally, not all of the capital expenditures are for investment—some of these are for bank recapitalization. Moreover, expenditure on “social services”, which include education, public health, water supply and sanitation, has been reduced progressively from 0.61% of GDP in 2016-17 to 0.59% of GDP in 2017-18 (revised estimate) and finally to 0.57% of GDP in 2018-19. Current expenditure for the Central government increased in 2017-18 by 0.5% to 11.6% of GDP from 2016-17 and it would be very difficult in an election year for this to be reduced even to 11.4% of GDP in 2018-19 as per budget estimates. At the same time, the government wants to provide a higher subsidy to the farmers as well that might prove to be too costly.

3. Underlining the importance of public subsidy for urban mass transit, the FT reports that Transport for London (TfL) - the public body formed in 2000 which oversees Tube, overground trains, and buses - will run an operating deficit of close to £1 billion in 2018-19.


When we compare Europe with the U.S., or China with India, it is clear that countries that experienced a higher rise in inequality were not better at lifting the incomes of their poorest citizens. Indeed, the U.S. is the extreme counterargument to the myth of trickle down: while incomes grew by more than 600% for the top 0.001% of Americans since 1980, the bottom half of the population was actually shut off from economic growth, with a close to zero rise in their yearly income. In Europe, growth among the top 0.001% was five times lower than in the U.S., but the poorest half of the population fared much better, experiencing a 26% growth in their average incomes. Despite having a consistently higher growth rate since 1980, the rise of inequality in China was much more moderate than in India. As a result, China was able to lift the incomes of the poorest half of the population at a rate that was four times faster than in India, enabling greater poverty reduction.


The U.S. and Europe, for instance, had similar population size and average income in 1980 — as well as analogous inequality levels. Both regions have also faced similar exposure to international markets and new technologies since, but their inequality trajectories have radically diverged. In the U.S., the bottom 50% income share decreased from 20% to 10% today, whereas in Europe it decreased from 24% to 22%... After the neoliberal policy shift of the early 1980s, Europe resisted the impulse to turn its market economy into a market society more than the US — evidenced by differences on key policy areas concerning inequality. The progressivity of the tax code — how much more the rich pay as a percentage — was seriously undermined in the U.S., but much less so in continental Europe. The U.S. had the highest minimum wage of the world in the 1960s, but it has since decreased by 30%, whereas in France, the minimum wage has risen 300%. Access to higher education is costly and highly unequal in the U.S., whereas it is free in several European countries. Indeed, when Bavarian policymakers tried to introduce small university fees in the late 2000s, a referendum invalidated the decision. Health systems also provide universal access to good-quality healthcare in most European countries, while millions of Americans do not have access to healthcare plans.

5. Fascinating Businessweek essay on Chinese outsourcing of textiles making to Ethiopia. Buoyed by fiscal concessions in the newly established industrial estates, Chinese companies have been flocking to invest in the country. China has given the country $10.7 bn in loans in the 2010-15 period. 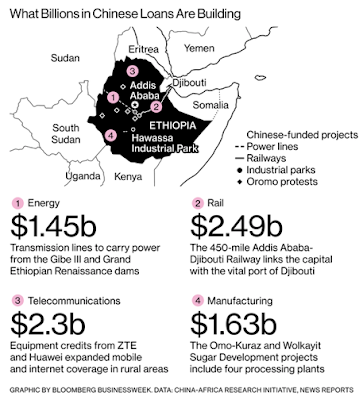 6. I have been a China pragmatist, not believing the bears, despite all the economic pressure points building up. But I am inclined to agree with Nitin Pai about the risk of the beginning of difficult period for China in the aftermath of Xi Jinping's ascension as a dictator. There is some inherent strength to institutional consensus of whatever kind. It can hold systems together against centrifugal forces. But once the institutional glue is replaced by that of an individual, howsoever impregnable he may look in the present, it is one crisis away from threatening to unravel.


7. Latin American bureaucracies are going through their version of decision paralysis. The trigger has been the Lava Jato investigations involving political influence buying by large corporates, especially infrastructure contractors,

A big setback was the Lava Jato (Car Wash) investigation, which began as a money-laundering case in Brazil and has engulfed the governments of a dozen Latin American countries. Odebrecht, a Brazilian firm that built highways, dams, power plants and sanitation facilities across the region, admitted to paying $788m in bribes. Its money financed political campaigns, including those of Colombia’s president, Juan Manuel Santos and Juan Carlos Varela, now Panama’s president. Pedro Pablo Kuczynski, Peru's President, has admitted that companies linked to him have taken (legal) payments from Odebrecht. The scandal has left a trail of unfinished projects, frightened politicians and bureaucrats, and wary bankers. A $7bn contract with Odebrecht to build a pipeline to transport natural gas from the Amazon basin across the Andes to Peru’s coast has been annulled and work has been suspended. Ruta del Sol 2, a 500km (300-mile) stretch of highway to help connect Bogotá to Colombia’s Caribbean coast, has stalled. Panama’s government cancelled a contract with Odebrecht for a $1bn hydroelectric project. Mexico’s biggest scheme, a new airport near the capital, has been plagued by corruption allegations. Andrés Manuel López Obrador, the front-runner in Mexico’s presidential election, scheduled for July 1st, has threatened to scrap it.

And the modus operandi of PPPs remain the same,

Public-private partnerships (PPPs) are open to abuse by construction firms such as Odebrecht, which make low bids to secure contracts and then renegotiate them to push up the cost, often by bribing a politician or two. More than three-quarters of Latin American PPP contracts in transport have been renegotiated within about three years of signing, according to José Luis Guasch, a professor of economics at the University of California.

Posted by Urbanomics at 2:08 PM