For decades, politicians and businesses in India used the excuse of protecting domestic companies to keep out foreign manufacturers in several areas. They argued that government support - directly with concessions and other subsidies and indirectly through trade barriers - was necessary to keep the fledgling domestic industries from being swept away by multi-national companies. Critics though contended that this was not in the country's benefit since it prevented the inflow of advanced technologies and strangulated market competition.

Over the past two decades, India has moved away from such industrial policy and opened its economy to private investments. The same has been the trend in many parts of developing world. But, in an inversion of this trend, industrial policy appears to be making a comeback in the most surprising of places - the self-professed flagbearer of free-market capitalism, the United States! And driving this has been the remorseless march of China, especially in the infrastructure sector equipments.

I have blogged earlier about the ambitious forays of Chinese companies into the global renewables, light-rail, power equipment and telecommunications markets. After having established their control over their domestic market for wind power generation equipments, the Chinese are now out to capture the global market. Chinese state-owned wind turbine makers like Dongfang, Goldwind, and Sinovel are now scouting large external markets like the US. Their undoubted cost advantage over the domestic US makers with more or less the same technologies is making US manufacturers apprehensive. Wind turbines made by Chinese manufacturers sell for an average of $600,000 a megawatt, compared with $800,000 or more for Western models made from Chinese parts, and even higher prices for European and American machines.

This has resulted in a rising tide of protectionist voices. They point to the unfair competitive advantages enjoyed by state-owned Chinese companies through the massive direct and indirect subsidies they receive from Beijing. To pre-empt moves to shut them out of the large US market, the Chinese makers have been exploring options to set up manufacturing facilities and thereby create jobs in the US.

The Chinese government have followed the classic industrial policy in these core infrastructure equipment sectors for the past two decades. Initially, on the one hand, the central government offered large subsidies and encouraged massive investments (by assuring a market for equipments produced by these firms). On the other, it encouraged foreign investments with strings attached - technology transfers, local content rules, and domestic manufacturing facilities - that catalyzed domestic manufacturing growth.

The domestic manufacturers leveraged the huge domestic volume and built-up expertise to move up the technology value-chain. As the domestic manufacturers developed competence, the government encouraged them to bid for foreign projects. The implicit subsidies enjoyed by these firms - cheap inputs and labor, tax concessions, cheap land and capital, preferential contracts from state-owned firms etc - coupled with their now undoubted competence, give the Chinese firms a huge pricing power. Over time, the Chinese manufacturers displaced their foreign competitors not only in the domestic market but globally too. For example, Chinese companies now control almost half of the $45 billion global market for wind turbines. 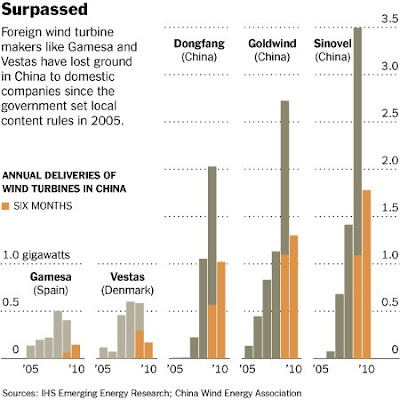 The Times report points to a classic example of industrial policy in wind power sector - Notice 1204 put out by China’s top economic policy agency, the National Development and Reform Commission, on July 4, 2005, declared that wind farms had to buy equipment in which at least 70% of the value was domestically manufactured. This is in clear violation of WTO rules prohibiting such local content regulations. However, for fear of losing a piece of China’s booming wind farm business, foreign manufacturers have preferred to indigenise productions instead of complaining to trade officials in their home countries.

Excellent account of why Evergreen Solar, the third-largest maker of solar panels in the United States, is closing down its US factories and shifting production to China. It says that the support offered in China cannot be matched by US governments - cheap factory labor (monthly wages average less than $300 to more than $5,400 a month for Massachusetts factory workers) and cheap capital (less than 5% and covering more than 2/3rd of the investment to double digit rates in the US). China’s real advantage lies in the ability of solar panel companies to form partnerships with local governments and then obtain loans at very low interest rates from state-owned banks.
Posted by Urbanomics at 6:31 AM