The biggest beneficiary of the G-20 summit undoubtedly has been the IMF and advocates of a global lender of last resort. The G-20 leaders pledged $1.1 trillion to ease the credit crunch faced, mainly by emerging economies, including $750 bn additional resources for IMF - $250 bn in additional SDRs and a $500 bn loan ($100bn each from Japan, EU and America, and $40 bn from China). This would take the total loanable reserves with IMF to $ 1 trillion, a threefold increase from $250 bn. They also agreed to provide $250 billion in trade credits to stem the sharp decline in cross-border trade. 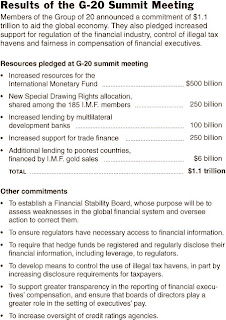 The divergence of opinion between the US and the Europe came in the way of any concrete steps on a co-ordinated global economic stimulus among the major economies. Neither was there any specific action on the critical issue of removing "toxic assets" from the balance sheets of banks. On the regulatory side, they agreed on regulations on hedge funds and rating agencies, as well as a crackdown on tax havens, which will be publicly identified and subjected to sanctions if they do not agree to share tax information with the authorities of other countries. They agreed on establishment of a Financial Stability Board to assess weaknesses in the global financial system and take remedial action.

Another major development, one with significant long-term consequences, was agreement on the appointments of the next World Bank and IMF chiefs. The US decided to give up its claim over the post of World Bank President, and in turn forced the Europeans to part with their traditional hold on the chair of the Managing Director at IMF.

Update 2
It now appears that of the $ 1 trillion figure bandied about, some of the money has yet to be pledged, some is double-counted and some would be counted in a "synthetic currency" that is not actually real money.

Update 3
The Economist on SDR allocation and IMF lending till date.

Update 4
IMF plans to issue bonds for the first time ever to raise $500 bn to finance its loan programs. The bonds’ buyers are expected to be the governments of fast-growing emerging economic powers like China, Russia, Brazil and India.
Posted by Urbanomics at 3:12 AM