1. Business Standard writes about how Edtech companies are rapidly entering physical tuition centre business. To paraphrase Peter Theil in another context - we were told that Edtech would disrupt education at scale, instead we're getting tuition centre chains!

2. Nice story on the emergence of Koothanapalli in Tamil Nadu's Krishnagiri district as an iPhone component manufacturing hub. Tata Electronics in a JV with Taiwanese Wistron is venturing into iPhone manufacturing as part of the PLI initiative. India needs several Koothanapallis.

3. From Matt Stoller. Amazon promotes Dayna Howard, a former analyst at a private prison company, to the head of training for warehouse workers.

Following Howard’s path is interesting for what it says about Amazon. She started her career at the private prison giant known as Corrections Corporation of America, which has since been renamed CoreCivic because it had such a toxic brand. (Some fun controversies involved letting private gangs run an Indiana prison to save costs, and stock manipulation.) At CCA, according to her LinkedIn page, Howard “re-vamped inmate admission process and revised all processing documentation. Resulted in a 20% reduction in inmate processing time and a reduced error rate.” Howard was apparently good at designing systems to herd prisoners. So naturally, she went to Amazon.
At Amazon, she came to head their global security group, and then their loss prevention team, which is to say, she ran their efforts to stop employees and contractors from stealing. All of this is reasonable if distasteful; theft in retail is a problem and having internal security is a clear need for a firm like Amazon. But what is surprising is that Howard was then promoted to run their learning and development team, which is Amazon’s internal training program for all warehouse workers. There’s nothing illegal about any of this, but Howard’s career path does give us some perspective on how Amazon execs understand those who did not attend college and what they are good for.

Says a lot about the motivations and work ethics.

4. Will the Pound Sterling breach the 1 US dollar level? See this 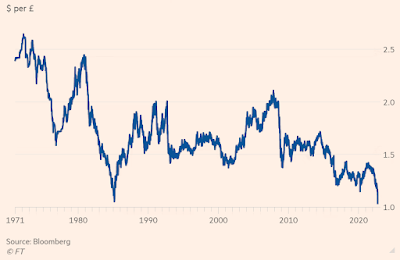 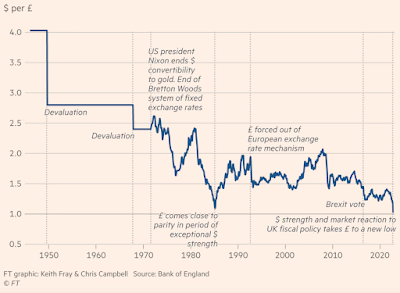 To put the scale of shock engendered by the Truss-Kwarteng tax cuts, which has been uniformly chastised among economists, the bond market response has been worse than anything in the past 35 years (including UK's ERM exit, Brexit, and Covid) 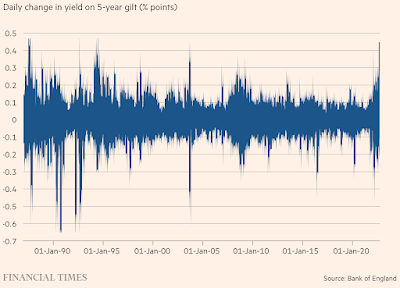 The fall of pound and rise in bond yields (UK now compares with Greece) reflects genuine concerns at UK's ability to repay its debts.
5. Elsewhere in Europe, German inflation rose at a 10.9% annual rate in September, the highest rate recorded since 1951. This comes on the back of nearly 44% rise in energy prices in the month. 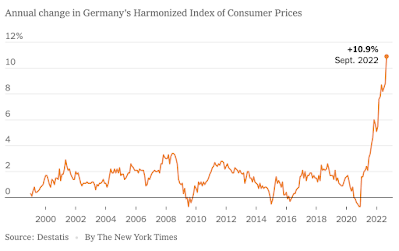 6. Akash Prakash points to a BofA report which highlights the top performance of Indian equity markets in dollar returns terms.

Since December 1992, (almost 30 years of data) Asia ex-Japan equities have delivered a dollar return of only 3.7 per cent per annum (excluding dividends). In contrast, the US has delivered 7.8 per cent returns per annum. Japan itself had a return stream of only 1.1 per cent and Europe was 4.1 per cent. EMs as an asset class delivered 3.9 per cent... China was the worst performer at (-) 1.4 per cent and India the best at 7.3 per cent dollar returns over a 30-year period. The next best markets in Asia were Korea and Taiwan, which delivered dollar returns of 4.5 per cent and 4.4 per cent, respectively, over this period. India thus outperformed its closest peer in Asia by almost 300 basis points per annum over a 30-year period... for a passive investor into China, (-) 1.4 per cent per annum is the return they would have achieved, had they been invested from the day China entered the MSCI benchmark... Within the EM universe, the next best country (of size) is Brazil, which has delivered dollar-based returns of 6.2 per cent over the last 30 years. However, Brazil has been a very difficult place to be, with returns over the past 10- and five-years at (-) 5.7 per cent and (-) 5.6 per cent, respectively. What stands out for India is the consistency of performance. It is the best-performing EM on a 30-year basis and is among the top two when you look at 20-year, 10-year and 5-year returns as well. It is also one of the two significant EM countries where the returns are positive and above 6.5 per cent in dollars, whether you look at 30-year/20-year/10-year or even five-year data... In fact, after the US, Sweden and Switzerland, it is the fourth best-performing equity market over the last 30 years (of substantial size and relevance).

The poor dollar performance of EM equities can be explained by the equity dilutions,

Asia has actually outperformed the US very significantly in terms of economic growth over this period. The US delivered nominal gross domestic product growth of 4.5 per cent compared to 9.5 per cent for the countries of Asia ex-Japan since 1992. This translated into revenue growth for the companies in Asia of 15 per cent, compared to 6.5 per cent for American companies. The strong revenue outperformance led to net profits growing at 12.6 per cent per annum for the Asian stocks compared to 10 per cent for US stocks. The problem, however, becomes obvious in the earnings per share (EPS) numbers. Despite delivering profit growth of 12.6 per cent, EPS growth for the Asian equities was only 4.4 per cent, compared to 8.2 per cent for the American companies. Dilution destroyed the returns ultimately delivered to investors... The excess dilution also reflects ultimately in the return on equity (RoE). Asian RoE’s were stuck at 11 per cent, compared to 15 per cent for the US. India has been able to match the US as dilution was far lower in India, than other Asian economies. The gap between index earnings at 13.7 per cent and EPS growth at 8.2 per cent was far narrower for India than the rest of Asia. Consequently, the RoE in India at 15-16 per cent was far higher, comparable to US levels. India never had easy access to capital, at least not in the early years and the discipline this lack of easy money brought is still visible. 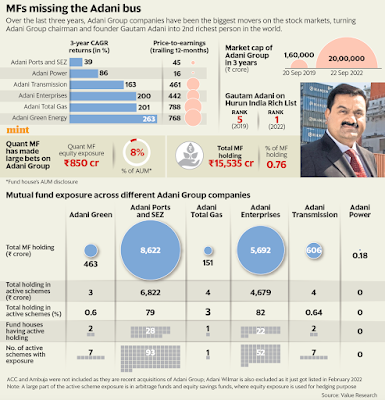 8. The ongoing global economic turmoil should be a reminder to sceptics about the premature claims of dollar's demise. Since the beginning of the year, dollar has risen against all except Russian Rouble, Brazilian Real, and Mexican Peso, and the nominal effective exchange rate of dollar has appreciated 12%. 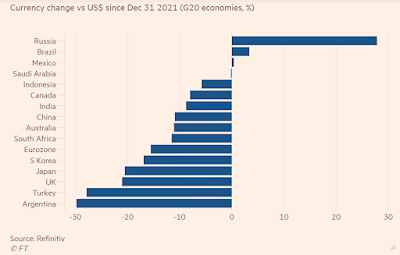 The dollar remains the undisputed safe haven currency. And it's importance in other areas remains very high. 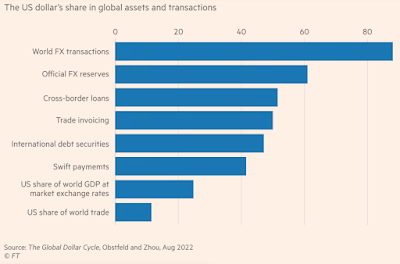 9. Fascinating studies on the impact of narcissism among CEOs as measured by the size of their signatures. Charles Ham et al find

Using the size of CEO signatures in SEC filings to measure individual narcissism, we find that CEO narcissism is associated with several negative firm outcomes. We first validate signature size as a measure of narcissism but not overconfidence... We then use CEO signatures to study the relation between CEO narcissism and the firm’s investment policies and performance. CEO narcissism is associated with overinvestment, particularly in R&D and M&A expenditures (but not in capital expenditures). Firms led by narcissistic CEOs experience lower financial productivity in the form of profitability and operating cash flows. Despite this negative performance, narcissistic CEOs enjoy higher absolute and relative compensation. 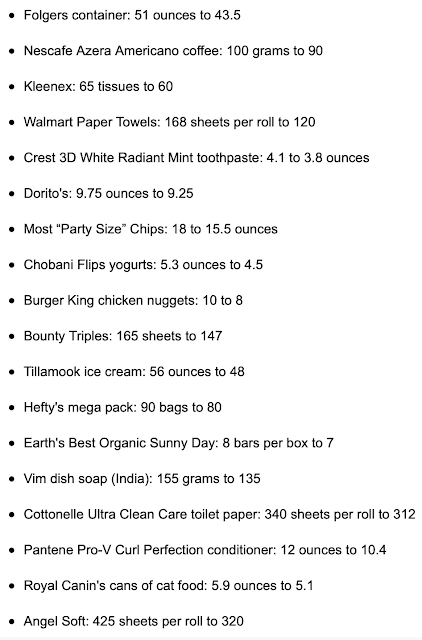