Spillovers in the global over-kill with inflation-fighting

I had blogged earlier expressing hope that the unmistakably clear and co-ordinated monetary tightening by central banks could have the effect of shaping inflation expectations downwards.
But like with all such actions, there is also the possibility of over-shooting with the tightening. Excessive tightening and associated reshaping of expectations could have the effect of tipping the world economy over into a recession. This is what the World Bank worries in its latest report about the possibility of a global recession.
But this is also a teachable moment in understanding macroeconomics in a financially integrated and globalised world economy.
Adam Tooze points to some graphs from the latest World Bank report. On the monetary policy side, the report informs that we are now seeing the most widespread tightening of monetary policy since early 1970s. 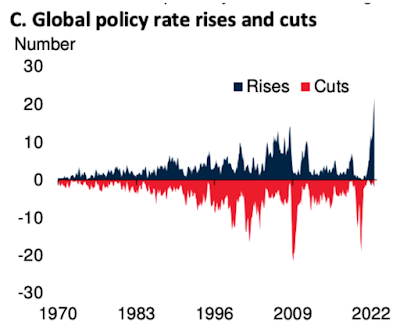 On the fiscal policy side too, the share of countries tightening their fiscal spending is greater than ever. 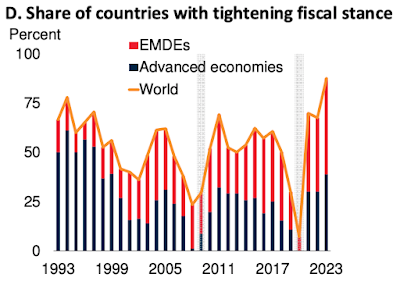 And the fiscal tightening is universal 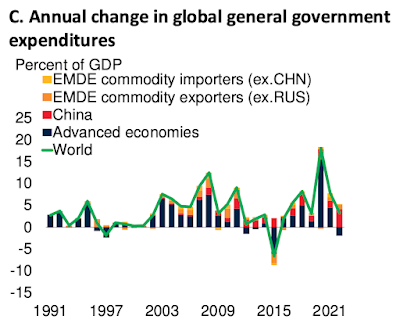 The level of real interest rates - nominal rates adjusted for inflation - remains low. But this is the most dramatic shift in the stance of policy we have witnessed since the 1980s. The risk is that it will be excessively contractionary and will trigger a worldwide recession.

But this global over-kill towards monetary (and fiscal) tightening can be traced to the US Federal Reserve's delayed reversal of its monetary accommodation. After falling behind the curve big time, the Fed has been catching up with some vengeance. Its collateral damage has been in the form of spillovers to developing countries, forcing those central banks to respond with their own tightening. The spillovers have not spared even those central banks who responded early enough to the inflationary trends and tightened. In fact, those countries, like Brazil, are now being forced to respond with further tightening, thereby adversely impacting domestic growth. Not to speak of the inflationary effects from depreciating currencies.

There is nothing new in this script. The globalisation of the US monetary policy and its spillovers (especially on developing economies) was a central theme in The Rise of Finance. This is just one snippet,

BIS economists Peter Hordahl, Jhuvesh Sobrun and Philip Turner find that ‘central banks in small economies have only a very limited ability to influence the long-term interest rate in their own currencies’. In other words, taken together, the monetary policy autonomy of small open economies has been progressively declining. They not only have less ability to influence their own interest rates but their long-term interest rates are also vulnerable to shifts in US long-term yields. Another paper by Robin Koepke of the Institute of International Finance (IIF) examined the impact of changes in US monetary policy in 27 emerging economies, specifically in terms of currency and banking crises and sovereign defaults. The paper studied 154 such crises over the 1973–2014 period and claimed that ‘US monetary policy is often just as important as domestic factors in explaining the incidence of EM crises, if not more important’. In other words, US monetary policy is not just a trigger, but one of the underlying factors that amplify EM vulnerabilities. More specifically, it finds that the ‘probability of crises is substantially higher when the federal funds rate is above its natural level (stance), during Fed policy tightening cycles (direction), and when market participants are surprised by signals that the Fed will tighten policy faster than previously expected (surprise)’.

In March 2021, when the US Federal Reserve was still buying $120bn-worth of securities a month, Brazil’s central bankers raised their benchmark rate by 0.75 percentage points on the back of concerns that a surge in global commodity prices would trigger inflation. It took another year for the US central bank to catch on to the fact that price pressures would prove far from transitory and finally raise the federal funds target from near zero. By then, Brazil had increased borrowing costs to 11.75 per cent. Time has proven Brazil’s monetary guardians right. Yet the Fed’s tardiness in keeping inflation in check is unlikely to leave the South American country — or, indeed, anywhere — unscathed. 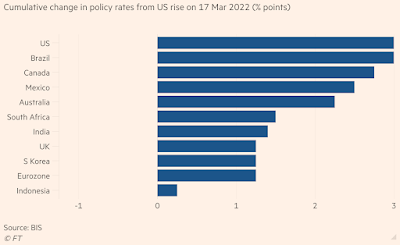 The Fed, which on Wednesday made its third 75 basis point increase in a row, is playing catch-up. While that may be the best course of action for the US economy, its aggression is triggering what Maurice Obstfeld, of the Peterson Institute for International Economics, labels “beggar-thy-neighbour” policies. The consequences of the Fed‘s mistakes are effectively exported from the US, burdening America‘s trade partners. Higher US rates have bolstered the dollar, exacerbating inflation elsewhere by raising the cost of commodities which are, more often than not, priced in the greenback. A “reverse currency war” is in full flow, with monetary authorities across the world now ditching their standard quarter-point increases in favour of 50, 75 and — in the case of Sweden and Canada — 100 basis point moves in order to stem dollar declines. Rate rises, while necessary to quell inflation, have become so aggressive the World Bank warned last week they risk sending the global economy into a devastating recession that would leave the world’s poorest countries at risk of collapse. The World Bank described the situation now as akin to the early 1980s, when the surge in global interest rates and slump in world trade sparked the Latin American debt crisis and a wave of defaults in sub-Saharan Africa.

For the 66 smaller economies that peg their currencies to the US dollar – especially those without significant capital controls, like Hong Kong, Panama, and Saudi Arabia – local interest rates tend to rise automatically whenever the US raises its interest rate, even when higher rates are harmful to their economic prospects... an interest-rate hike by any major central bank has the effect of exporting inflation to other countries, forcing other central banks to raise interest rates more than they otherwise would have done... The result is an interest-rate spiral that is more damaging to world output and employment than these countries may wish to see collectively.

And this excellent graphic from Peterson Institute 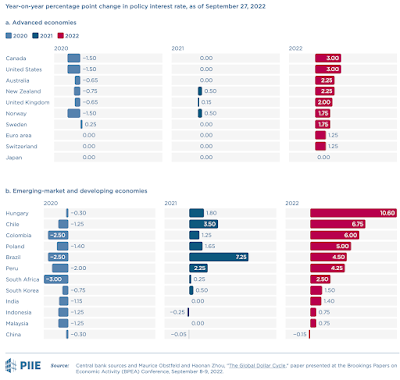 This is only the latest example of how the dominance of the US Fed and the Dollar has led to the demise of monetary policy autonomy of central banks elsewhere. The impossible trilemma has been replaced by the impossibility of monetary policy autonomy. This also means that exposure to vulnerabilities have to be reduced in the first place. Based on this reality, this was our conclusion in The Rise of Finance,

Given integrated capital markets and the unipolar importance of the US dollar to the international payment system, commodities and capital markets, spillovers from policies pursued in developed countries to developing countries is inevitable. Developing countries lack instruments and coercive power to dissuade advanced nations from pursuing domestic policies that have negative spillover effects for them. Since the world has no alternative to the US dollar presently, the only option left to avoid spillovers is to reverse integration of capital markets and free capital flows. In the absence of restrictions on capital flows, both the impossible trinity and the financial market trilemma have been reduced to the impossible duality and financial market dilemma, respectively. Therefore, capital controls cannot be the policy of last resort to be deployed in the event of financial instability. It is central to ensuring financial stability. Developing countries must be cautious in liberalizing external commercial borrowings for their domestic borrowers and in inviting foreigners to invest in domestic debt.

This episode is a cautionary note to policy makers in countries like India. Policy makers, entrusted with protection of national interests, should be cautious with the advice and wary of lobbying on capital account liberalisation from market intermediaries and ideological enthusiasts whose incentives are aligned differently. This is especially important since the pressure from foreign institutional investors and their domestic supporters to liberalise capital account in the guise of deepening bond markets will be the highest now, also because India appears to be the only big EM game in the town for now. Policy makers should resist this temptation.

Central bank real rates are negative across most countries 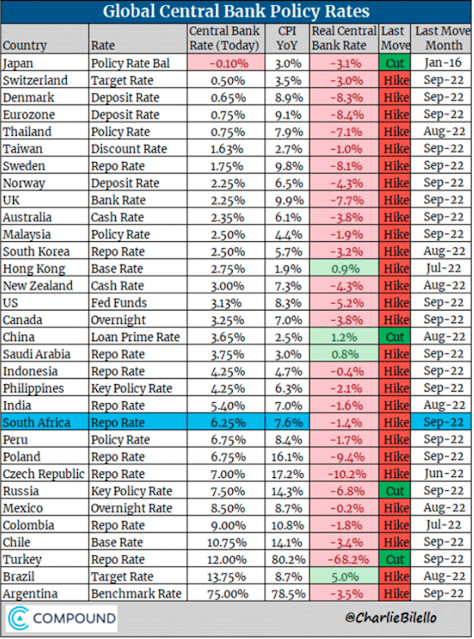 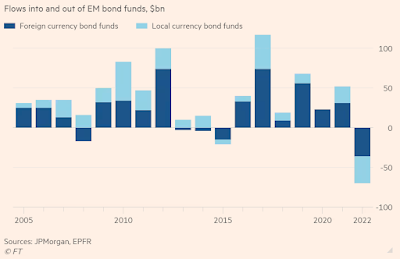 The investor flight underscores how emerging markets are facing mounting risks from surging interest rates in developed markets, which make the typically high yields on EM debt look less attractive... Rather than weighing the relative risks of currency exposure, investors are simply getting out. It marks a sharp turnround: flows were positive into both types of bond funds for each of the previous six years, at a combined average of more than $50bn a year.

No matter how strong the domestic economic fundamentals, sudden stops and capital flights from developing countries to the safe haven of dollar assets are inevitable in times of global economic crisis. This cannot be avoided. The only way to mitigate its adverse effects is to limit exposure to the global financial markets in the first place to only what's required to manage macroeconomic balance. This is a cautionary note on capital account liberalisation.
Urbanomics at 8:07 AM
Share