What Hertz tells us about capitalism in the Age of Debt

The FT has a nice story on Hertz, the poster child of rental cars, which has gone bankrupt. It highlights several points.

1. It is human to attribute or apportion excessive credit and blame when things go spectacularly well or equally bad respectively. All things being equal and everyone meeting some basic qualification, plain good luck is confused for great skill and bad luck for all deficiencies. This applies just as much to business and to strategies followed by business leaders of large companies.

But the narratives around great business strategy, stock picking, and so on persists despite numerous studies to the contrary. Hertz is just another example. Sample this about the contrasting denouements to two episodes of debt gorging from Hertz's own history,

The year was 1973 and as the Vietnam war wound down, an oil embargo was threatening the very foundations of the US economy. Petrol stations were running dry and highways began to empty. At Hertz, the car rental company then known for its pioneering computerised booking system, executives realised that transport companies would inevitably be among the first casualties. Hertz’s response? It loaded up on debt. Within weeks of the embargo starting, Hertz was selling off the gas guzzlers that made up three-quarters of its fleet, and borrowing heavily to replace them with smaller, more efficient cars. The gamble proved wildly successful. The next year, as an oil price shock ravaged competitors and triggered a bout of “stagflation” as high inflation combined with low growth, Hertz’s revenues and profits hit new records... Yet almost half a century later, Hertz is bankrupt, the victim of a coronavirus pandemic that has brought large parts of the global economy to a standstill. The company, which employed 38,000 people last year, and operated from about 12,000 locations, was unable to escape the weight of a $17bn debt pile. The bet that prospered in the 1970s has come unstuck in the 2020s. Other rental chains have taken out new loans to ride out the drought in travel bookings, but Hertz’s borrowing capacity was already spent: after 15 years of aggressive financial engineering, it owed $12,400 for every car worth $10,000. Much of the money came from complex financial instruments that allowed creditors to demand their cash back when the company could least afford it.

There are no universal strategies. All good businesses make such bets. Those which generate outsized gains also comes with outsized risks. When it pays off, as it did with Hertz first time, it is great. But when it fails, as is the case now, it can look spectacularly reckless. The only difference was plain bad luck.

2. The US economy is sitting on a massive corporate indebtedness problem,

In the US, non-financial corporate debt was about $10tn at the start of the crisis. At 47 per cent of gross domestic product, it has never been greater. Under normal conditions this would not be a problem, because record-low interest rates have made debt easier to bear. Corporate bosses, by levering up, have only followed the incentives presented to them. Debt is cheap and tax deductible so using more of it boosts earnings. But in a crisis, whatever its price, debt turns radioactive. As revenues plummet, interest payments loom large. Debt maturities become mortal threats. The chance of contagious defaults rises, and the system creaks. 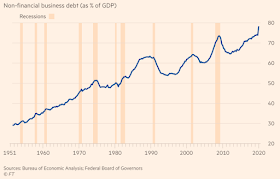 The Fed's $750 bn corporate bond purchase program, with all its salutary effects, has only added to the incentive distortions.

The IMF has warned of a massive debt problem,

At the end of last year, the IMF issued a striking warning: as much as $19tn of business debt in eight countries led by the US — or 40 per cent of the total — could be vulnerable if there were a “material slowdown” in the economy, a scenario that, if anything, now seems tame.

3. The logic behind the extraordinary monetary accommodation pursued by governments and central banks,

The authorities are effectively betting that a revival in the economy will allow many companies to grow out of their new debts. “By subsidising the debt markets, we were able to avoid a liquidity problem becoming a solvency problem,” says Mr El-Erian. “That’s exactly what central bankers will tell you: we’re going to keep finance going through higher debt — and we hope that higher debt will be validated by growth coming back.”

4. Narratives and norms change pretty quickly. Till the seventies, debt carried an element of stigma. In stark contrast, today leveraging up to maximise returns is considered the smart thing to do. The most glamorous part of the financial market, private equity, is built largely on debt. For such a reversal in attitude towards debt, it happened pretty quickly,

The leveraging of America was little more than an idea until a young bond salesman reimagined the function of the credit markets, and set in motion a debt machine that would change the rules of business. Michael Milken’s insight was that lending to risky companies at high interest rates could be more profitable than earning reliable but meagre returns from the debt of industrial champions. By the late 1970s, he had graduated from trading the deeply discounted bonds of struggling companies to inventing a form of corporate venture capital, issuing debt for companies whose prospects were so uncertain that their bonds were rated as junk from the start...

The craze for debt spread far beyond junk bonds, which were being issued at a rate of $25bn a year by the end of the 1980s, up from barely $1bn at the beginning of the decade. Industrial conglomerates, utilities and other investment grade borrowers also loaded up. Even far smaller companies got in on the act, taking out loans that were often repackaged into securities that could be traded on the markets. Insurance companies and pension funds — many of which have regulatory reasons to avoid investing in equities — lined up to buy it all.

Hertz was only following the Milken script, piling up debt even as its valuations declined. 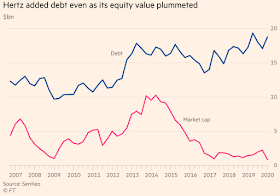 Econ 101 teaches us about the difference between debt and equity and the reasons for their respective legal status. For sure, as the likes of Michael Jensen have argued, debt has a disciplining role arising from the invisible hand of the financial markets.

But what if the invisible hand becomes ineffective and the financial markets lose their disciplining powers? A combination of leveraged buyouts and ultra-low interest rates (and the strong likelihood of it remaining so for a long time), that too when done by the largest financial institutions and companies, have changed the risk-return calculus which traditionally underpinned the differential status of debt and equity.

6. Several important areas within the financial market are characterised by asymmetricity, an important reason for the weakening of the invisible hand of the market dynamics. Three in particular stand out. At the corporate level, large companies in many sectors today assume massive risks with the firm belief that the can appropriate all upside and externalise all downsides. At the individual level, while executive compensation gives out bonuses when there are profits, there are no counteracting penalties or salary cuts when there are losses. At the level of business models in important industries like private equity, the firm earns its massive management fee irrespective of what happens on returns. If returns are positive, it earns windfall carried interest, but does not suffer any haircut on management fee if the returns are negative.

7. If evidence counted for anything, with this latest addition from Ludovic Phalippou, the narrative around the attractiveness of private equity, at least for institutional investors, should have been history. This balance sheet of Hertz from private equity ownership is only the latest exhibit,

The $15bn private equity deal that took Hertz private in 2005, led by Clayton, Dubilier & Rice, was the second-biggest on record. It also turned out to be one of the shortest; just nine months later, Hertz returned to the stock market. But even that brief period under private equity ownership transformed Hertz’s balance sheet. Before the 2005 buyout, interest payments on the company’s borrowings absorbed about one-fifth of its operating income. Under new ownership, Hertz added $4bn to its debt pile, Moody’s cut its rating to junk, and the average interest rate on the company’s borrowings increased. After that, interest absorbed nearly three-quarters of the company’s operating income... This exercise in financial engineering was a triumph. When Hertz returned to the stock market in November 2006, its equity was worth about $4bn, roughly double what the private equity firms had paid for it a year earlier. When CD&R sold its last shares in 2013, the firm listed its achievements at Hertz, which it said included improving operating efficiencies, changing the way the company bought and sold cars and creating a flexible capital structure that withstood the great recession. But one powerful legacy was the vast pile of debt, and long after the private equity firms had gone, Hertz’s management team kept adding to it. By last December, borrowings accounted for $17bn of the rental company’s $19bn enterprise value, with only a sliver of equity on top.

I had blogged earlier here about the problem of debt as the world faces the biggest economic crisis in nearly a century.
Urbanomics at 2:19 AM
Share