An IPL bonanza - what for the cities?

The biggest endorsement of the commercial success of cricket's Indian Premier League (IPL) was the big auction for two cities (Pune and Kochi) which netted a staggering $ 703.33 mn, a value in excess of the original eight franchises combined. Apart from the organizers, I am inclined to argue that the IPL bonanza offers unclaimed money on the table for each of the cities which are franchised out. In fact, every commercial consideration dictates that it is a marvellous opportunity for these cash-strapped cities to pocket a much-needed windfall. 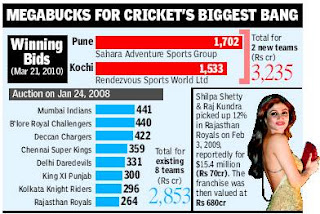 In a world of brands and logos, patents and copyright protections, city and country names are the ultimate brands, especially powerful in their respective markets. The IPL franchises have mounted their bids by leveraging the brand name of each city, so much so that the USP of each franchise is the respective city's brand name.

Econ 101 tells us that since city brands are critical factor inputs underpinning the IPL enterprise, the brand should be appropriately compensated, like other factor inputs are. The brand name of a city is a public good and not a private property that can be appropriated for private gains. It is therefore natural to levy a "brand-use rent" on those using the brand that should accrue to the legal custodians of the city, the local Municipal Corporation. If IPL organizers can free-ride on using the city name for their private gain, what prevents businesses from directly using city brand names to peddle their products.

Further, the IPL matches clearly places strains on the local administration in many other ways. The shifting of IPL to South Africa last year on grounds of security and the controversies and debates surrounding security of players in the lead-up to this year's IPL underlines the critical role of security in the organization of such events. The district administration of the host city is therefore clearly stretched out to ensure the successful completion of a purely commercial event, often to the exclusion of other more important public issues. Since state governments regularly charge the organizers of private entertainment events for providing security for the event, the IPL too should be levied an appropriate user charge.

None of this is to deny that cities do not gain from IPL matches, but is only a arguement for giving cities their due share. There cannot be any crowding out effect here - if cities charge for the brand, the franchises will simply move out. Franchises base themselves in the big cities to leverage the massive audience and markets of these cities which can support the highly priced tickets and other memrobilia, apart from the reality that such events need the infrastructure that only these cities have.

Only the ignorant or duplicitous will persist with the claim that IPL is more about cricket than commerce. Without being judgemental about anything, cricket has become the platform for a massive commercial push. The IPL organizers may say that they pay their corporate taxes and therefore have a right to expect the government to provide all assistance in organizing the event. Lest they forget, corporate taxes are levied on the profits made by a commercial enterprise and is not a substitute for user charges or rent.

Tailpiece: I am convinced that the Pune and Kochi auctions will turn out to be classic examples of "winner's curse". The real winners from this auction are the existing eight franchises, who can now leverage the latest price discovery to exit when the IPL bubble is peaking. Let us re-visit the balance sheets three years down the line and I will be really surpised if it turned out any different!
Posted by Urbanomics at 6:08 AM