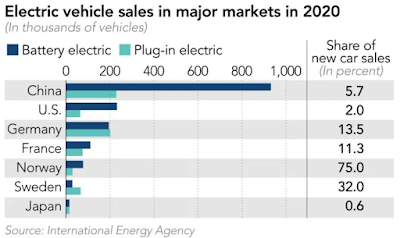 Once small and local (Arnold Laver, a timber merchant, sponsored Sheffield United from 1985 to 1995), now sponsors are multinationals. In the late 1990s tech and telecoms companies predominated; then financial and insurance firms muscled in. Since 2005, when gambling laws were liberalised, betting firms have worked their way up the league. This season they sponsor 45% of teams.

3. The Economist reports of application of auction theory to counter the declining population of migratory turtle-birds in the British Isles,

Paul Klemperer, Elizabeth Baldwin and Alex Teytelboym, all of Oxford University... have designed a reverse auction in which farmers bid publicly for contracts to provide suitable habitats. This is trickier than it sounds. Turtle doves need wildflower seeds to eat, shallow-sided open water to drink and thick scrubby hedgerows in which to nest—all in proximity. A farmer might wish to provide just one or two of these, and to rely on neighbours to provide the rest. Moreover, breeding pairs must be able to find the sites, but they must not be too clumped together. And finally, the habitats offered by farmers can vary in quality as well as price... To solve it this time round, the economists constructed an index of turtle-dove happiness (TDH, or “ta-das”). An algorithm searches combinations of bids, seeking to maximise ta-das for a given budget. Bids both compete with and complement each other: a high-priced offer to grow wildflowers might beat a cheaper one if they would be nearer a nesting site, and would thus create more ta-das. The Royal Society for the Protection of Birds, a charity, has used the system in two pilot auctions in Norfolk and Suffolk, attracting 63 bidders. The latest closed in June, and seeds should be sown in the autumn.

Though it'll be some time before the results become evident, it would be very interesting to see its results.

4. India's and China's US-trade fact of the week,

5. Tamal Bandopadhyay points to the near demise of Mudra bank, established in April 2015 as a refinancing institution for small business loans,

In five years, till 2020, it disbursed Rs 25,494.65 crore of which Rs 3,018.5 crore, or 11.84 per cent, flowed to the MFIs. During this period, Mudra’s refinance was just 2.13 per cent of the loans disbursed by all lenders under PMMY. A 2019 RBI inspection found that Mudra was allotted Rs 40,000 crore under Priority Sector Shortfall Fund (PSSF) since its inception but only Rs 22,500 crore had been drawn by it. “…It is lacking in achieving its objective/ mandate to provide refinance support to banks, NBFCs and MFIs for loans under PMMY and ultima­tely support to micro/small enterprises,” the inspection report says.
By 2021, the total amount drawn from RBI under PSSF dropped to Rs 20,084 crore... Banks are to channel 40 per cent of their loans to the small and medium enterprises, agriculture and other segments under the so-called priority sector norm. The shortfall in meeting the priority loans target, which the banks used to keep as deposits with Nabard and Sidbi, is given to Mudra. Incidentally, Sidbi dismantled its wing, SIDBI Foundation for Micro Credit (SFMC), in 2019 and transferred its Rs 271 crore India Microfinance Equity Fund (IMEF) to Mudra. The foundation was launched in 1999 to develop microfinance, and the fund was floated in 2011 to support small MFIs with equity and quasi-equity. I wonder whether Mudra has supported any small MFI as yet. It is governed by a truncated board without the full complement of independent directors.

“Private investors are extremely unlikely to save the company, given successive governments seeing telecom capital as something to target,” the Deutsche analysts write. The only viable solution for India to keep Vodafone Idea as a going concern “is for the government to convert its debt into equity.” The carrier’s stock market value of $3.3 billion comes to just over a 10th of the debt. So even with some borrowings written off, existing shareholders will get diluted heavily.

The company owes most of its $30 bn debt to the government.

7. Property registrations have surged in Mumbai following the government's decision to lower the stamp duty temporarily. After an initial cut in August 2020, it was further cut to 2% till December, and 3% till March 2021. 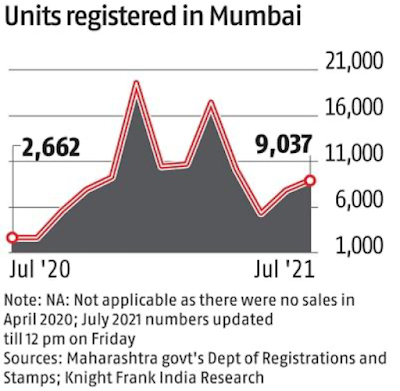 8. The latest amendment to the Factoring Regulation Act is a step in the right direction. It allows any NBFC to offer factoring of receivables.

9. Zomato's IPO highlights attention on what's turning out to be an excellent year for IPOs in the Indian stock market. While 28 companies have raised over Rs 42,000 Cr, over 50 more have announced intentions to access the public market. 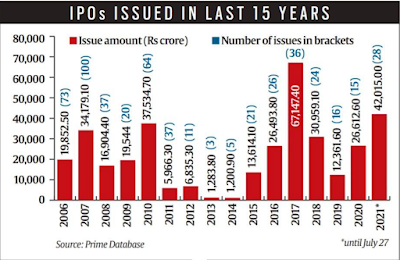 This is a good read in Livemint that provides numbers to put the Zomato IPO in perspective. 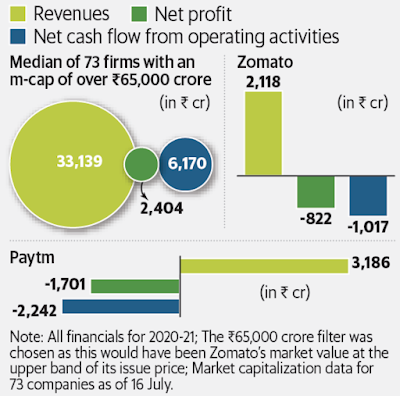 At ₹1.04 trillion, Zomato is valued at 49 times its latest full-year revenues. At ₹75,000 crore, Paytm would be valued at 24 times revenues. By comparison, the median revenue multiple of the sample set of 73 companies is 5 times. DoorDash, the largest food-ordering company in the US, listed in December 2020 at a revenue multiple of 11 and is currently valued at 20 times. Zomato’s only direct competitor in India, Swiggy, is unlisted. Food franchise businesses like Jubilant Foodworks (Domino’s Pizza) and HardCastle Restaurants (McDonald’s) are valued at 13 times and 9 times revenues, respectively.

Posted by Urbanomics at 7:15 AM