1. Italy follows France in imposing revenue-based tax on digital companies, which pay little by way of taxes in countries where they have their users.

The new tax, passed this week by Italy’s parliament, will take effect Jan. 1. Similar to the tax implemented this year in France, Italy’s imposes a 3% levy on revenue on some digital revenue for companies with more than €750 million in global revenue, including least €5.5 million in Italy.

The issue has gained momentum and negotiations are currently on to forge a consensus and arrive at a common tax on technology companies. A EU effort in this regard collapsed on the face of opposition from beneficiary countries like Ireland and Luxembourg.

3. In a nod to their importance, especially at a time when they are being squeezed by long-term trends, Canada's establishes a Ministry for Middle Class Prosperity! The share of middle-class has been shrinking across OECD countries since the turn of 1990s.

Stocks and bonds are staging an extraordinary run, on track for their biggest simultaneous gains in more than two decades. Heading into the final two weeks of 2019, the S&P 500 has soared 28.6%, while a bond rally has pushed the yield on the benchmark 10-year Treasury note down three quarters of a percentage point. If the gains continue through the final days of December, it would mark the first time the broad stock index has jumped by at least 20%, while Treasury yields have slipped by at least that much since 1998.

5. This may well be the longest economic expansion in the US history, but it also the weakest on both output growth and job growth. Here is the output growth 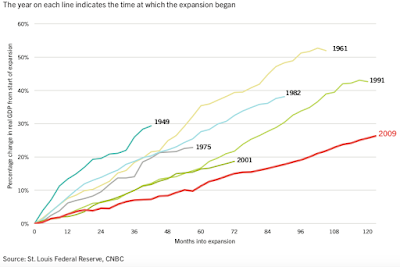 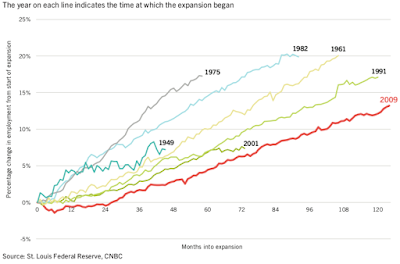 6. Revealing NYT investigation on mobile phone data and privacy. The short answer is this, howsoever much you anonymise, mobile phone data trace invariably leads to extremely deep invasion of individual's privacy. See this also from Ananth.

7. As if WeWork's Adam Neumann's $1.6 bn exit package was not enough for blowing up investors money, an FT investigation reveals that there is more to come in case of a floatation.

8. Talking about non-performing loans, Indian banks are competing with only Greece for leadership. 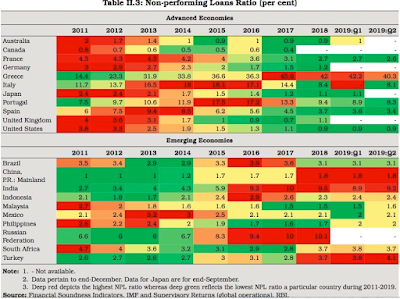 10. US productivity growth rate for the decade was just 0.3%!

11. Uniqlo has cracked the problem with handling of soft materials by robots,

There was only one job that robots could not do when Fast Retailing, the owner of Uniqlo, replaced 90 per cent of its workers with robots at its flagship warehouse in Tokyo last year. But now, with the help of a Japanese start-up called Mujin, the world’s third-largest retailer says it has cracked the final barrier to full automation, a priority for Uniqlo as Japan’s ageing population creates labour shortages. The two companies have invented a invented a robot with one arm that can pick up soft T-shirts and place them neatly in boxes to be shipped to customers. While it sounds easy, the ability to lift soft textiles has been a challenge for clumsy robotic arms. Add to this the need to sort through constantly changing seasonal clothes, in shades that are hard to distinguish and wrapped in various forms of packaging, and humans have always come out on top. Even the most aggressive believers in automation, such as Amazon, still depend on human “pickers”.

12. Finally, very interesting twist to Middle Eastern geopolitics. Chastened by the reality that American protection may not be forthcoming, Saudi Arabia has started reaching out to its enemies. Informal contacts have been established with Houthi rebels in Yemen, Qatari regime, and even the Iranians.

In the months since a missile and drone attack widely seen as the work of Iran left two Saudi oil facilities smoldering, the Saudi crown prince has taken an uncharacteristic turn to diplomacy to cool tensions with his regional enemies... Even though American and Saudi officials agreed that Iran was behind the Sept. 14 attacks on the petroleum processing plants at Abqaiq and Khurais, temporarily halving Saudi Arabia’s oil production, President Trump responded with heated rhetoric but little else. For the Saudis, the tepid response drove home the reality that despite the tens of billions of dollars they have spent on American weapons — more than $170 billion since 1973 — they could no longer count on the United States to come to their aid, at least not with the force they expected... For the United States, the shift toward diplomacy is an awkward paradox. The Trump administration and Congress have been pressing the Saudis to end the war in Yemen, and the administration has pushed them to reconcile with Qatar, largely in vain. Now, the presumed Iranian strikes may have done more to advance those goals than American pressure ever did... Analysts saw the lack of a significant American response to the attacks as a blow to the policy known as the Carter doctrine, which dates to 1980, when President Jimmy Carter vowed to use force to ensure the free flow of oil from the Persian Gulf after the Islamic Revolution in Iran and the Soviet invasion of Afghanistan.

Posted by Urbanomics at 9:10 AM