1. It's hard not to argue that SoftBank, with its $100 bn Vision Fund, which is ten times bigger than the next biggest venture fund, has single-handedly distorted incentives big-time in the venture capital world,

“These start-ups try to get workers attracted to them and bring them within the fold,” said Uma Rani, a researcher at the International Labor Organization who is surveying start-up contractors in emerging economies. “When the workers attach to the whole thing and are highly dependent on it, then you slash it. This is something we are systematically seeing.” SoftBank’s Vision Fund is an emblem of a broader phenomenon known as “overcapitalization” — essentially, too much cash. Venture funds inundated start-ups with more than $207 billion last year, or almost twice the amount invested globally during the dot-com peak in 2000, according to CB Insights, a firm that tracks private companies. Flush with the cash, entrepreneurs operated with scant oversight and little regard for profit. All the while, SoftBank and other investors have valued these start-ups at inflated levels, leading to an overheated system filled with unsound businesses. When the companies try to cash out by going public, some have run into hurdles. At two of SoftBank’s biggest investments, WeWork and Uber, some of these issues have become public... “Since the money started pouring out of SoftBank, they have completely distorted the priorities and focus of young ventures around the world,” said Len Sherman, a Columbia Business School professor. 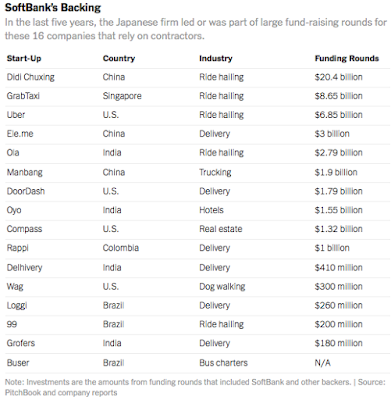 At Ola, where SoftBank was the largest shareholder, 62 percent of what drivers earned in 2016 came from investor money rather than fares, according to the data firm RedSeer. When some of the start-ups cut costs, often prodded by SoftBank, they reduced payments to workers. Many contractors said they wanted to stop working with the start-ups, but couldn’t because of upfront investments they had to pay off.

2. On Oyo, it is very hard to believe that its aggressive growth will have a happy ending.

3. From Eduardo Porter in the Times on how the rich cities are becoming richer still, increasing the gap with their poorer cousins,

There are about a dozen industries at the frontier of innovation. They include software and pharmaceuticals, semiconductors and data processing. Most of their workers have science or tech degrees. They invest heavily in research and development... And if you don’t live in one of a handful of urban areas along the coasts, you are unlikely to get a job in one of them. Boston, Seattle, San Diego, San Francisco and Silicon Valley captured nine out of 10 jobs created in these industries from 2005 to 2017, according to a report released on Monday. By 2017, these five metropolitan regions had accumulated almost a quarter of these jobs, up from under 18 percent a dozen years earlier. On the other end, about half of America’s 382 metro areas — including big cities like Los Angeles, Chicago and Philadelphia — lost such jobs. And the concentration of prosperity does not appear to be slowing down.

But efforts like this from a Brookings study that seeks to help others emulate the successful cities by supporting them with resources and enabling policies to attract new businesses may not be effective,

Battling the forces driving concentration will be tough. Unlike the manufacturing industries of the 20th century, which competed largely on cost, the tech businesses compete on having the next best thing. Cheap labor, which can help attract manufacturers to depressed areas, doesn’t work as an incentive. Instead, innovation industries cluster in cities where there are lots of highly educated workers, sophisticated suppliers and research institutions. Unlike businesses in, say, retail or health care, innovation businesses experience a sharp rise in the productivity of their workers if they are in places with lots of other such workers, according to research by Enrico Moretti, who is an economist at the University of California, Berkeley, and others.

Other industries and workers are also better off if they have the good fortune of being near leading-edge companies... The cycle is hard to break: Young educated workers will flock to cities with large knowledge industries because that’s where they will find the best opportunities to earn and learn and have fun. And start-ups will go there to seek them out. Even skyrocketing housing costs have not stopped the concentration of talent in a few superstar cities.

4.  Abhijit Banerjee and Esther Duflo write about the futility of searching for big ideas that drive economic growth, and instead argues in favour of focusing on smaller ideas which have evidence of impact.

5. On the phased manufacturing policy (PMP) for mobile phones, here is the latest,

India has imported mobile phone components worth more than $1 billion from Vietnam — with which India has a free trade agreement (FTA) —in the first half of this fiscal alone, compared to $800 million in the whole of 2018-19 and just over $600 million in FY18.

Following demand from handset makers, three years back India had imposed basic customs duty of up to 15% on imports of more than half-dozen mobile phone components, including a 20% duty on fully made mobile phones. The objective of the PMP was to gradually move up the value-chain by targeting volumes which, it was hoped, would help pull in sub-assembly and component industry in due course.

But apparently even as on the one hand India was imposing duties on components imports, on the other hand it was signing FTAs with Vietnam/ASEAN which ended up defeating the very purpose of the duties (which were aimed at China). A case of the two hands not co-ordinating?

Maybe I am missing something here. But if this is indeed a case of poor co-ordination and lack of active surveillance on a policy implementation, then we do have a big problem at hand.

6. This is interesting coming as it does from the Chairman of India's largest telecom operator, Mr Sunil Mittal,

We have gone through several crises before, but this probably is the most difficult time for the industry. We have seen brutal competition, an unprecedented competition, for the last two or three years. The result has broken balance sheets, eight companies have collapsed or folded up, gone bankrupt or were sold for nothing. What we have now must be protected. And for that, the government must do whatever they to support in whichever form they can, including the reduction in levies charged on us. They must have a sympathetic view towards the industry.

He then goes ahead to suggest a new three-plus-one market structure for telecoms - three private operators and BSNL!

Left unsaid in this is an acknowledgement that the much hyped telecom story was largely about an industry being at an opportune moment in history with the market's evolution and the technological trends, and less about any inherent merits of unfettered market capitalism where governments get out of the way. The request for bailout by government would have appeared less hypocritical if this too was explicitly stated.

7. Good set of data on health expenditures from the NSS 2017-18 analysed in Livemint. Outpatient treatment expenses outstrip hospitalisation expenditures. While hospitalisation rate was 2.9% (2.9 out of 100 need hospitalisation, outside childbirth, in a year), non-hospitalisation treatment was 7.5% in the previous 15 days (to the survey). This makes average per capita expenditures on OP treatment to be double that of in-patient care. IP care in private hospitals is 6-8 times more costlier than in public hospitals. The share of OP care in total medical expenses is higher for the poor. 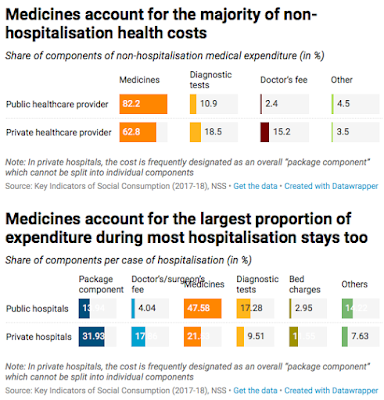 8. A measure of the extent of credit binge by Chinese companies,

The banking system more than quadrupled in size, from $9 trillion at the end of 2008 to $40 trillion today... While most of the lending comes from banks, Chinese borrowers have increasingly turned to the bond market to get money they need to run their businesses. Now the bill is coming due. According to S&P Global, Chinese companies must pay back $90 billion in debt denominated in American dollars, meaning the lenders are global companies and investors outside China. In 2021, an additional $110 billion will come due. At home, Chinese companies will have to pay $694.6 billion to bondholders next year and $706 billion in 2021.

9. An interesting study from China about the value of collecting and disseminating information on air pollution which leads to behavioural adaptations that lower health costs,

During 2013-2014, China launched a nation-wide real-time air quality monitoring and disclosure program, a watershed moment in the history of its environmental regulations. We present the first empirical analysis of this natural experiment by exploiting its staggered introduction across cities. The program has transformed the landscape of China's environmental protection, substantially expanded public access to pollution information, and dramatically increased households' awareness about pollution issues. These transformations, in turn, triggered a cascade of behavioral changes in household activities such as online searches, day-to-day shopping, and housing demand when pollution was elevated. As a result, air pollution's mortality cost was reduced by nearly 7% post the program. A conservative estimate of the annual benefit is RMB 130 billion, which is at least one order of magnitude larger than the cost of the program and the associated avoidance behavior. Our findings highlight considerable benefits from improving access to pollution information in developing countries, many of which are experiencing the world's worst air pollution but do not systematically collect or disseminate pollution information.

10. Finally, Ed Luce shines light on the opacity surrounding financial market transactions in the US,

The US has 10 times more shell companies than the next 41 jurisdictions combined, according to the World Bank... America is the largest dirty money haven in the world. Its illicit money flows dwarf that of any other territory, unless you treat Britain and its offshore tax havens as one. The US Treasury estimates that $300bn is laundered annually in America. This is probably a fraction of the true number. Worse, the US government has no idea who controls the companies that channel the money because America lacks a corporate central registry. There is no law in America requiring disclosure of “beneficial ownership”. US banks must report suspicious activity. But law firms, real estate companies, art sellers, incorporated enterprises and non-bank financial institutions are exempt. Those hoping to clamp down on money laundering are thus heavily outgunned by lobbyists for the status quo... the US system offers a red carpet for dirty money. Furthermore, autocrats in Russia, China, Saudi Arabia and elsewhere could not thrive without the connivance of America’s suite of service providers.

This is a great primer on how the corrupt use legal structures to hide stolen wealth and what to do about it.
Posted by Urbanomics at 7:14 AM