1. Bloomberg has this on the ratio of out-bound to in-bound foreign capital in developing countries, 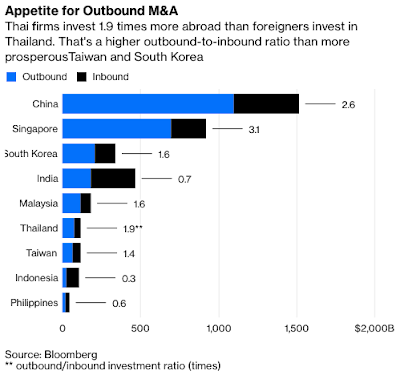 On China and Thailand, this is important,

When political institutions fail to act as pressure valves, capital wants to escape before it gets trapped.

2. Bloomberg has a very good article on how Narayana Hrudalaya is trying to drive down surgery costs, and Modicare may be a contributing factor. Sample this on cost-cutting without compromising anything on safety,

Shetty’s philosophy of thrift is everywhere. The surgical gowns are procured from a local company for about a third of the cost of international suppliers. The tubes that carry blood to heart-and-lung machines are sterilized and reused after each surgery; in the West, they’re thrown away. The machines themselves, along with devices such as CT and MRI scanners, are used well past their warranties, kept running by a team of in-house mechanics. The operating rooms, pieces of real estate so expensive that many hospitals bill for their use by the minute, are also part of the assembly line. Whereas preparing a U.S. surgical theater for the next patient can take 30 minutes or more, Narayana has gotten the process down to less than 15, in part by keeping turnaround teams with fresh instruments, drapes, and other supplies on immediate standby, ready to roll the moment a room is available. Even patients’ families are part of the upskilling model. Narayana trains them to bathe patients and change bandages in the hospital, as they’ll do when they get home. This allows paid staff to focus on more challenging work. Through all these methods and more, Narayana has been able to get the retail cost of a heart bypass, its most common operation, down to $2,000, about 98 percent less than the U.S. average.

3. A third Bloomberg article points to the declining current account surplus of China, and the prospect of the country competing with other emerging economies for cross-border capital inflows.

Contrary to President Donald Trump’s perception, China is no longer a frugal nation that sells a lot abroad and buys little in return. The country’s middle class is now traveling and swiping plastic overseas. Last year, more than 160 million Chinese visited foreign countries, spending $237 billion on everything from rice cookers in Japan to Gucci loafers in Italy. As a result, China’s current account surplus has collapsed. Edging dangerously close to twin deficits – both fiscal and current account – Beijing is now keen to attract foreign portfolio inflows to balance its external accounts. That’s why, all of a sudden, China is opening its financial-services industry, allowing global investment banks to take majority control of their local brokerage joint ventures.

4. Nice article in Indian Express on how Indore managed to become India's cleanest city for three years in a row. The investments in personnel, bins, equipments, vehicles, infrastructure etc to cover the entire city is impressive in itself. A testament to the government's commitment to the issue, and attendant willingness to commit resources, and the Corporation's ability to execute these initiatives in finite time. But the bigger achievement is with the behaviour change, essential for sustainability. Or is the story over-stating what has been achieved?

5. The Economist points to the breakdown of traditional safeguards involving regulation, litigation, and competition, which may have been responsible for rise in corporate scandals in the US,

Take regulation first. The system is a strange blend: there are pockets of laissez-faire attitudes here, thickets of rules there and lobbying everywhere. It is variously prone to laxity, capture and incompetence... Second, litigation may no longer be quite the deterrent it once was. Criminal cases leading to jail terms for top executives are as rare as socialists at Goldman Sachs. And civil law has lost its bite. America has long used class-action suits to punish firms and compensate consumers. Tort costs born by firms are equivalent to about 2% of gdp a year, higher than in other countries. Nonetheless, life has got easier for firms. Arbitration clauses, in which customers and staff forfeit the right to pursue class actions, have become more common. Firms are more likely to extend cases to appeal, which can take up to a decade... The final constraint is competition. It can drive firms to cut corners but in the long run should act to discipline careless or badly behaved firms, because customers shun them... But across the economy incumbent firms have got more powerful over the past 20 years, making it harder for customers to switch.

6. Revisiting this illustration of inequality,

7. Bloomberg article on Chinese engagement in Djibouti. This tiny, but strategically important, country looks a Chinese colony in all but name.

8. Finally, this story about Blue Apron, the ingredient-and-recipe meal kit service, is another cautionary note on the modern start-up ambition and valuations, important as the flow of start-up IPOs planned for 2019 have begun with Lyft. The company's shares are trading 90% below its June 2017 IPO price. In fact the share price halved within just two months of the IPO. Sample this,

The company’s founders and their Wall Street bankers convinced stock investors, a group well represented in coastal cities, that the business was worth $3.2 billion in part based on the idea that they were going to expand operations all across the country. The goal, according to the IPO prospectus, was to eventually be able to sell meals to 99 percent of Americans. “Blue Apron’s mission is to make incredible home cooking accessible to everyone,” it said in the prospectus. But with a two-person meal that requires about 30 minutes of preparation in the kitchen costing about $23 with shipping, it’s not clear how realistic that ever was. As it turns out, the company is even struggling to maintain its current roster of clients on the two coasts... Blue Apron hasn’t posted a single profitable quarter. Neither has Lyft or Uber, which could be valued at as much as $120 billion.