1. Jean Pisani Ferry strikes a sobering note on the distributional consequences of any green tax deal. Sample this,

The transition to a carbon-neutral economy is bound to make us worse off before it makes us better off, and the most vulnerable segments of society will be hit especially hard. Unless we acknowledge and address this reality, support for greening the economy will remain shallow and it may eventually wane... the distributional effects of the green transition are unfortunately adverse. The poor and the suburban middle class spend more of their income on energy than the rich and the urban professionals do, and often lack the means to buy a new, efficient heating system or to insulate their house. And, because working-class jobs tend to be more carbon-intensive, factory workers and truck drivers will be hurt more than designers and bankers. The problem our societies are facing is massive. It should not be hidden. The French government had to backtrack after the Yellow Vests revolted against a €55 ($63) per ton fuel tax, but a recent estimate of what its needed to decarbonize put the rate at €250 per ton in 2030.

3. The crisis facing large planes like the Airbus A380 is being mirrored in the shipping industry. A twin squeeze, excess supply from a bet on ultra-large ships and declining demand due to slowing trade, threatens the health of global shipping industry.

The U.S. economy has added jobs for 100 consecutive months. Unemployment recently touched its lowest level in 49 years. Workers are so scarce that, in many parts of the country, low-skill jobs are being handed out to pretty much anyone willing to take them—and high-skilled workers are in even shorter supply.

And wages too have been rising 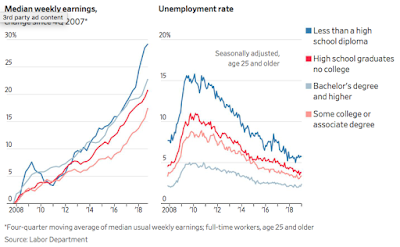 5. This is one of the first full evaluations of the impact of the typical modern fintech on the poor - an evaluation of Kenya's M-Shwari. While there are several assumptions/qualifications (chief being that it covers only a period of 18 months since introduction), broadly the findings are very similar to that from microfinance.

The short story. On the subsistence or poverty alleviation side, fintech leads to greater access and usage of formal financial channels by the poor and increases their resilience (allows the poor not to have to forego basic expense when faced with various economic shocks). On the consumption and income side, there is no evidence of either increase in consumption nor greater savings and investments in productive assets nor rise in wealth from access to fintech credit. Little impact in terms of its use as working capital or investment in entrepreneurship.

On its own, the typical fintech innovations (focused on financial inclusion) can perhaps at best be a useful poverty alleviation complement. But its impact in increasing incomes is more likely to be marginal.

6. The landmark Right to Education Act 2009 in India is associated with increased enrolment but declining student test scores. Suggestive evidence on the reasons for the decline in student learning levels - large influx of weaker students or out-of-school students since RTE and the distorted incentives from the introduction of no-fail policy.

7. The Economist has a briefing on the changing landscape of diplomatic, military and economic landscape of Africa.

From 2010 to 2016 more than 320 embassies were opened in Africa, probably the biggest embassy-building boom anywhere, ever. Turkey alone opened 26. Last year India announced it would open 18. Military ties are deepening, too. America and France are lending muscle and technology to the struggle against jihadism in the Sahel. China is now the biggest arms seller to sub-Saharan Africa and has defence-technology ties with 45 countries. Russia has signed 19 military deals with African states since 2014. Oil-rich Arab states are building bases on the Horn of Africa and hiring African mercenaries... As recently as 2006 Africa’s three biggest trading partners were America, China and France, in that order. By 2018 it was China first, India second and America third (France was seventh)... The biggest sources of foreign direct investment are still firms from America, Britain and France, but Chinese ones, including state-backed outfits, are catching up, and investors from India and Singapore are eager to join the fray. 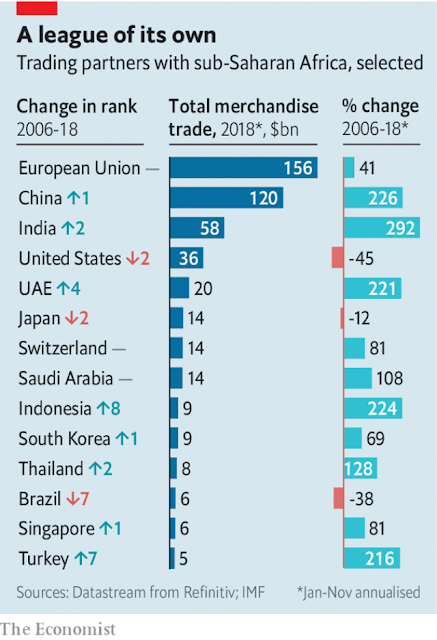 8. The return of industrial policy gathers pace as continental European countries talk of propping up national champions in important industries.

Across the continent, politicians are seeking to influence business using a range of tactics including regulation, nudging managers to do deals and boosting state ownership. At Renault-Nissan, the downfall of Carlos Ghosn has become intertwined with a struggle for control between the French and Japanese governments (see Banyan). Last month Peter Altmaier, Germany’s economy minister, called for champions such as Siemens and Deutsche Bank to be protected. Last week it emerged that the Dutch government has built up a 14% stake in Air France-klm to help its former flag-carrier “perform better”. And Italy is poised to increase to 10% its stake in Telecom Italia, which it began privatising 21 years ago.

9. Finally, the FT points to the re-emergence of debt problems among frontier markets, this time driven by the expansion of Chinese lending. 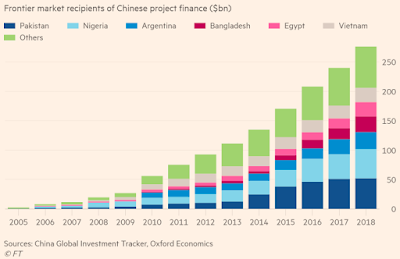 Debt levels which had fallen in mid-2000s following restructuring and defaults has now recovered to its earlier alarming levels. 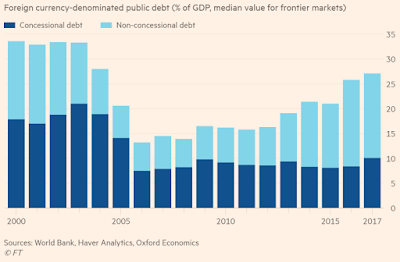 The worst thing about this latest round of debt binge has been, again like earlier times, been channeled into consumption and not investments. 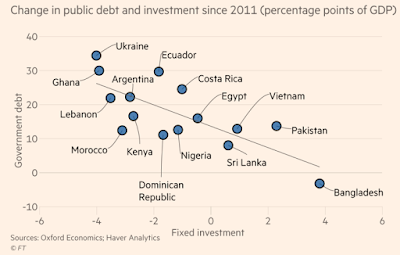 Who said this time is different?
Posted by Urbanomics at 6:21 PM