Greater Bay Area - feeling the stones while crossing the river

The world's longest sea-bridge has opens for traffic today. The 55 km bridge, connecting Zuhai on the mainland with Hong Kong and Macau, cost $15 bn to construct. It is part of the governments plan to develop the southern region involving Guangdong's nine cities, Hong Kong, and Macau, as a Greater Bay Area to rival the Silicon Valley. 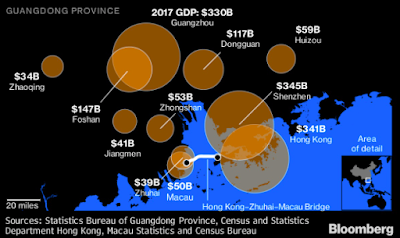 The Pearl River Delta was the origin for China's spectacular economic performance over the past three decades. If Xi Jinping has his way, it may well turn out to be the engine that drives the shift in the Chinese economy from manufacturing and exports towards high innovation, services, and consumption.

FT has a feature on Xi Jinping's plan to develop the Greater Bay Area.

The Greater Bay project covers an area containing nearly 70m people with a $1.5tn economy... HSBC expects the region’s economy to nearly double to $2.8tn by 2025... The idea behind the Greater Bay Area plan is to capitalise on the region’s impressive infrastructure and expertise in finance, manufacturing and technology by dropping trade barriers, promoting cross-border business and eventually creating a single market... Guangdong, which contains the nine mainland cities involved in the plan, is the workshop of the world, exporting $670bn of goods last year, more than any other province in China. Its economy is more driven by private enterprise than any other in the country and is home to the most billionaires. It incorporates sprawling industrial centres like Dongguan and Foshan, home to many of the region’s factories, and Shenzhen, China’s Silicon Valley and the base for technology giants from dronemaker DJI to telecoms equipment producers Huawei and ZTE to Tencent, which operates the WeChat app. The region boasts an impressive logistics network, with three of the world’s 10 busiest container ports — in Hong Kong, Guangzhou and Shenzhen — and thriving international airports in all three cities, as well as the new bridge and high-speed rail links. Hong Kong and Shenzhen are major financial centres... Economists at HSBC say that the Greater Bay Area is a “compelling example of how the clustering of talent, capital and industries will drive higher value-added production and fuel consumption to secure long-term sustainable growth”.

But how to go about such a cross-national project? The FT article points to lack of clarity that is apparently worrying investors,

The toughest challenge is how to integrate Hong Kong, a free port with its own customs regime and a semi-democratic system, into mainland China, where Mr Xi has been cracking down hard on critics and intensifying capital controls for fear of financial instability... Beijing was supposed to release guidelines on the integration of the Greater Bay Area last year but officials are struggling to come up with concrete proposals to drive the economy forward without upsetting the delicate political balance in Hong Kong... this ad hoc approach may not be enough to convince many investors to part with their cash. “Companies are interested in the potential of the Greater Bay Area project,” says Jens Hildebrandt, the head of the German chamber of commerce in China. “But they’re still missing specific plans and actions.”

It is impossible to have clarity upfront on many things with such complex and ambitious projects. This is all the more so since the Greater Bay Area project is much more than a massive capital investment and area development project. It is also about the integration of the very different social and political systems of Hong Kong and Macau into that of the mainland. So the typical Chinese "crossing the river by feeling the stones" approach is perhaps best suited,

The project is similar to the Belt and Road and other grand Communist party initiatives, which Yu Jie, a China expert at the London School of Economics, calls “fluid in nature, opaque in implementation and flexible in the measures used to deliver projects”. “Crossing the river by feeling the stones”, as Deng Xiaoping called this approach to economics, has worked for China in the past. But it is harder to improvise as the scale of the economic and political “contradictions”, as the Chinese Communist party likes to call them, increase.

The challenge is to have the feet firmly on the river-bed, feel the stones, and respond accordingly.
Posted by Urbanomics at 12:18 PM