Lessons from the Carillion collapse

The first month of the new year has ushered in two events which could be triggers for the definitive reversal of fortunes for public private partnerships (PPPs), not just in the UK but also elsewhere. They are the collapse of public contractor Carillion and an assessment of UK's PFI released by the National Audit Office (NAO). I shall cover them in two posts, starting with Carillion.

Carillion, a large outsourced service provider of public services and construction contractor for mostly public projects, went into compulsory liquidation on January 15 after its creditors refused any more support. Carillion, with a market capitalisation of £61 million, has left been left in the lurch with its 19500 UK employees, and £ 5bn in liabilities of which £2.6 bn goes into pensions to 28500 pensioners.

Carillion manages 200 operating theatres and 11800 hospital beds, 18500 patient meals per day, is a major contractor on HS2 rail project and Crossrail, manages 50,000 homes for Department of Defence, build and operate 150 schools, catering and cleaning at 875 schools, maintenance and repairs at half of UK prisons, many public libraries, builds substations for National Grid. These are largely public goods. None of these activities can stop, even temporarily, without enormous social and political consequences and human suffering. Irrespective of how Carillion is liquidated, in the short-term governments have no option but to take over these services. 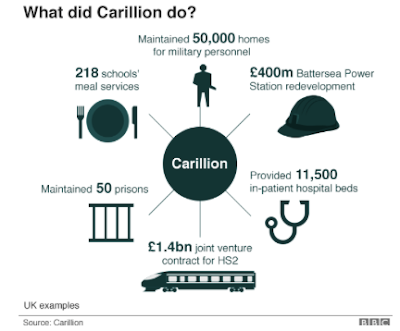 Carillion's collapse has starkly illustrated the risks borne by governments when they outsource public services. The service provider may collapse, but governments cannot abdicate from the provision of public services and the responsibility will fall on it. This creates a potentially big moral hazard for any service provider. Imagine the situation if G4S or Serco files for bankruptcy!

For example, what prevents them from stripping assets with obscene salaries and bonuses, excessive dividend payouts, starving the company's pension fund, piling up massive debts, and then filing for bankruptcy, leaving the government to bear the liabilities? And all this while skimping on investments and cutting corners with service quality. Is there any more remunerative business to be in? Isn't this the playbook for private equity firms in public services?

This is not the only issue. There is a fundamental problem with the unqualified assumption that private providers can provide value for money from provisioning of public services. Fundamentally, there are two problems with  service delivery in public systems. The first one is the standard problem of inefficient resource deployment and management. The second less-known problem is that of constraints imposed by eco-system factors.

Eco-system constraints can vary across sectors and contexts. For example, in transportation, it may be difficult for governments to raise tariffs on a toll road operated by itself compared to a contractually obligated tariff increase. Or government employees may be captured by political and other vested interests that public managers may not be able to control. Or inter-jurisdictional co-ordination may be easier because the private management can exercise more control over their employees than government management (say, co-ordination among different sanitation wards, different property tax collectors etc). Or the private provider is better positioned in being able to ring-fence activities, cost them, and levy user fees.

The presumption is that the private provider is better positioned to reduce the significant costs these two problems impose. But if evidence from across the world over decades and across sectors is taken into consideration (a subject of several blog posts here), this presumption is just a chimera. Even if we assume that the private sector can wring out efficiencies, the second problem is not easily surmounted. In fact, addressing the second problem may be much costlier for the private sector.

This can be traced to an irony about how the public views government and the private sector. We may collectively agree that the private sector is more efficient and less corrupt than government. But when the rubber meets the road and problems surface - tariff increase, user fees, big accident, grave omissions, loss of jobs etc - debates are triggered that invariably frames the problem (correctly, most often) as one of private profiteering, and the same social mood swings violently against the private sector. In fact, the public have deeply internalised the belief that private sector delivery will be much superior that even small shortfalls in quality arouses a disproportionately (when compared to a similar failure by government) higher level of anger and public discontent.

While the public may prefer private efficiency over government sloth, they are likely to vociferously revolt at private windfalls and socialised losses. In fact, losses and quality shortfalls by private providers are certain to evoke an indignation and anger several times more than similarly sized losses and quality deficiencies by public providers.

Further, once a service provider is large enough and service delivery interfaces closely with the civil society, it starts to face the same problems with employees and their unions, sub-contractors, local political leaders, consumer groups etc that governments struggle with. In such large entities, their managers and workers are no less prone to be captured by vested interests. And unlike the government with its institutional authority, the private provider is very badly positioned to negotiate acceptable enough bargains in such situations.

Private providers and contractors hedge for all these risks. Lenders too have internalised these risks. All these add up several layers of costs. The result is higher life-cycle costs associated with PPPs when compared to the public sector comparators. In simple terms, the transaction costs due to eco-system constraints associated with outsourcing incurred by the private provider end up likely to more than offset any efficiency gains. It is this that the NAO report lays bare in great detail.

The Economist has this perfect narrative of what drives the bids of large construction companies,

Construction is a perilously low-margin business to begin with. To expand the business and keep enough cash rolling in to pay creditors and shareholders, Carillion’s bosses bid ever more aggressively for public-sector contracts, especially in the wake of the financial crash in 2008, when such work was scarce... Public-sector tenders are supposed to consider the quality of bids as well as the price, but in practice contractors have found that “bidding at a low price is usually the best way to win,” says Peter Kitson, a lawyer at Russell-Cooke. Companies bank the upfront payments and hope they can make money by charging for the extra work that nearly always comes with infrastructure projects. If, as happened to Carillion, extra costs arise, the deal can quickly become loss-making.

And I do not understand why this is not a criminal misconduct,

As Carillion was failing and its pension fund slipping into deficit, shareholders continued to receive dividends and the firm’s boss trousered a £1.5m pay package. Even the Institute of Directors, a business lobby, condemned Carillion’s board for rewriting company rules to protect executives’ bonuses if the company failed.

And the last word,

Yet a string of failures in Britain, of which Carillion is the latest, means that the country which converted the world to “contracting out” risks becoming a cautionary tale. Voters are flirting with a Labour opposition that has already vowed to renationalise industries and now says it would bring many public contracts back in-house. The Carillion affair could mark the collapse not just of a company, but of an idea.