1. There is limited correlation between exchange rate movements at the margins and export competitiveness. That India has a problem with its exports is undoubted. Buoyed by green shoots in US and Europe, as well as rebound in China, emerging market exports have been growing at their fastest pace in volume terms in six years. Emerging Asia has been at the forefront of the rebound in global trade.

While rising commodity prices have given many predominantly commodity exporters a leg up, it has been only one driving factor, and in value terms for the year to July 2017, among exporters, India competes with Turkey for the wooden spoon! 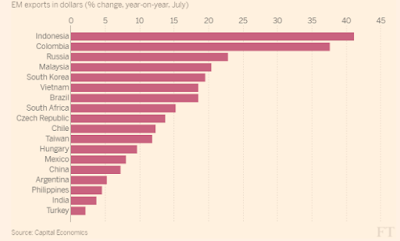 But it is incorrect to blame exchange rate appreciation for that. For one, emerging market currencies have strengthened against the dollar. 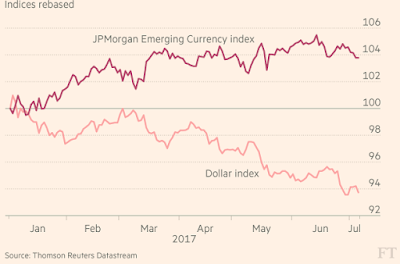 And, till end-March this year, far from strengthening, compared to its EM peers, the rupee has actually been among the weakest performers. And those which have appreciated significantly like Russia, S Korea, Mexico and Taiwan have done far better than India, despite its far smaller appreciation. 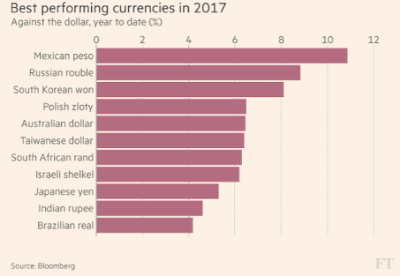 In fact, till now, compared to its EM peers, the rupee has been very stable against the dollar. On REER too, India comes middle of the pack over the past 12 months. 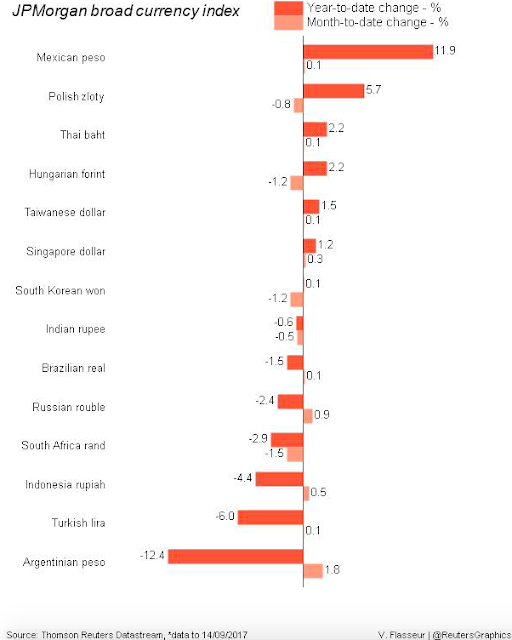 And it is not as if India's currency problems have cropped up in the last one year. From the Bruegel database, the REER of India's main EM peers weighted against 138 trading partners since end-2007 shows that rupee has appreciated more than all others except Vietnamese Dong, Bangladeshi Taka, and Chinese Yuan. The appreciation has been continuous since the taper-tantrum in mid-2013, 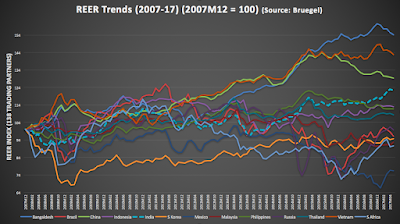 But for the same period, from WDI database, while India clearly has suffered a vertiginous drop in exports, especially since 2010, others with stronger or similarly moving currencies like Bangladesh, Vietnam, China, Indonesia, and Philippines have done better with their exports,


Clearly, there is more at play here than exchange rates. In any case, even assuming we need to weaken rupee, do we have the instruments at hand to manage it. Apart from sterilisation costs as well as the opportunity cost of holding low yielding dollar assets, open market operations come with risks of being marked out as a currency manipulator.

2. From John Mauldin's latest newsletter, this stunning graphic shows the impact of search for yields. Euro junk-bond yields have converged with US Treasuries! 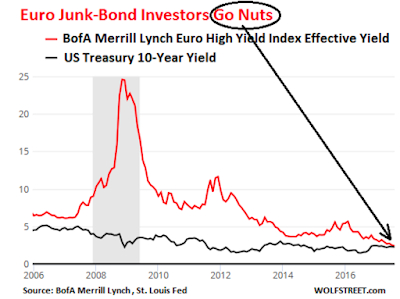 The Euro high-yield bonds is only representative. The spread between US Corporate Bonds and Treasuries are inching towards their pre-crisis lows.

As a measure of the search for yields, the total assets managed by the 100 largest alternative investment managers rose by 3% to $3.6 trillion in 2016. Pension funds and insurers, squeezed by low yields in traditional fixed-income assets and the need to invest for long-term, have been forced into moving their portfolio allocation towards alternative investments which sit at the riskier end of the spectrum.

In this context, the risks from a slowdown, and its attendant adverse impact on these high-yield issuers and asset categories, are enormous. They have the potential to freeze up the financial markets immediately more than in earlier times with far lower exposures.

3. Alternative investors are not the only ones to have increased the demand for fixed-income corporate assets. FT has a nice story on the emergence of large corporates, with their massive and growing surpluses, as important buyers in the $8.6 trillion US corporate debt market. Thirty US companies have amassed cash, securities and investments worth $1.2 trillion, with some of the corporates rivalling even the larger asset managers. Roughly $840 mn of the $1.2 trillion were held in investments outside the US. As FT writes,

These companies, each with more than $10bn of cash, equivalents and other financial investments, own roughly $423bn of corporate debt and commercial paper securities, $369bn of government and agency debt and disclose holdings of more than $40bn of asset and mortgage-backed securities. 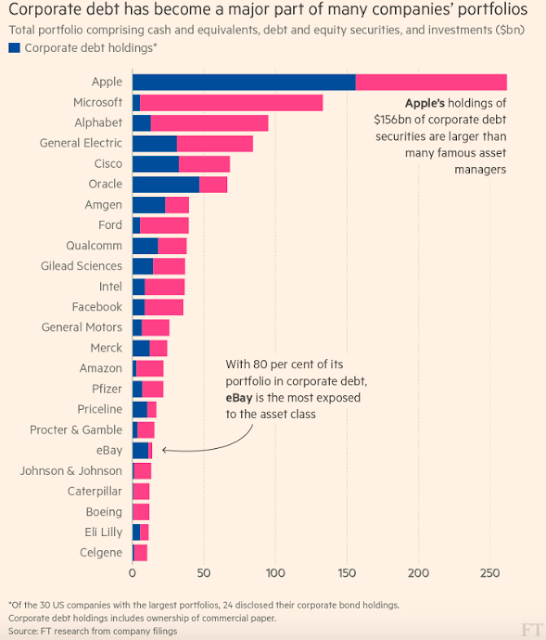 These investors' risks arise from the steep falls in bond prices with any likely increases in interest rates.

Ironically this situation of massive cash surpluses and their investments in corporate bonds, sits alongside a reality of large borrowings by the same corporates,

Apple, Microsoft and others have borrowed to fund activities that are easily financed with cash, like distributions to shareholders and share repurchases. The iPhone maker has raised more than $28bn through debt markets this year to fund, in part, shareholder returns, according to Dealogic. It is cheaper for those companies to borrow than it is to pay tax on repatriated cash.

4. Staying with the same theme, and reminding us about the risks associated with such search for yields, the FT has a nice graphic that maps asset yields against their respective ten year volatility. 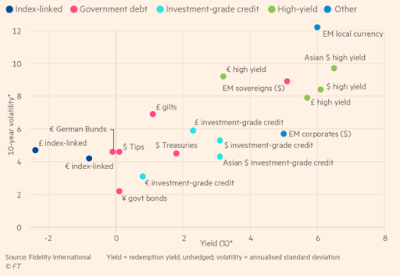 Clearly higher yields come with higher volatility. And underlining the dangers of cross-border capital flows, EM local currency corporate bonds have the highest volatility. Another reminder about the risks of capital floods followed by sudden-stops and crises.

5. Finally, Warren Buffet appears to have all but won his famous 2007 bet that passive investing would outperform active fund managers, excluding their high fees, over a ten year period. An update shows that S&P 500 has outperformed hedge funds in nine out of the ten years. 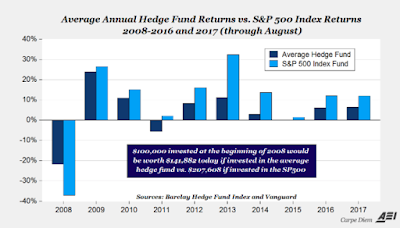 One more reminder about the fallacy of picking stocks!
Posted by Urbanomics at 3:08 AM