The need for caution with infrastructure costs-benefits assessments

Atif Ansar and colleagues at Oxford Business School examined infrastructure projects in China and claims to puncture the twin myths that infrastructure creates economic value and that China has a distinct advantage in its delivery. They scrutinised 95 road and rail projects worth $65 bn (2015 dollars) across China in the 1984-2008 period and have very negative conclusions,

Far from being an engine of economic growth, the typical infrastructure investment fails to deliver a positive risk-adjusted return. Moreover, China’s track record in delivering infrastructure is no better than that of rich democracies. Investing in unproductive projects results initially in a boom, as long as construction is ongoing, followed by a bust, when forecasted benefits fail to materialize and projects therefore become a drag on the economy. Where investments are debt-financed, overinvesting in unproductive projects results in the build-up of debt, monetary expansion, instability in financial markets, and economic fragility, exactly as we see in China today... China’s infrastructure investment model is not one to follow for other countries but one to avoid...

In line with global trends, in China actual infrastructure construction costs are on average 30.6 per cent higher than estimated costs, in real terms, measured from the final business case. The evidence is overwhelming that costs are systematically biased towards underestimation... China has built infrastructure at impressive speed in the past but, it appears, by trading off due consideration for quality, safety, social equity, and the environment... We estimate that cost overruns have equalled approximately one-third of China’s US$28.2 trillion debt pile... China’s M2 broad money grew by US$12.9 trillion in 2007–13, greater than the rest of the world combined... We conclude that, contrary to the conventional wisdom, infrastructure investments do not typically lead to economic growth.

The cost over-runs were as follows 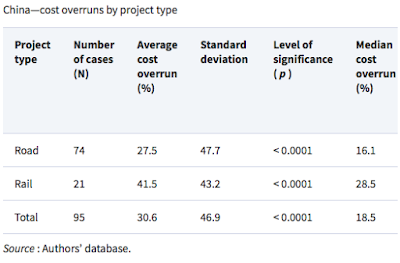 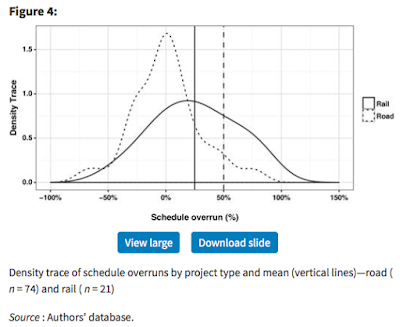 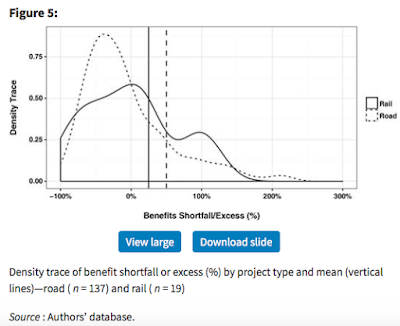 1. All infrastructure projects, public or privately financed, will have cost over-runs. The more complex and long-drawn the projects, as the vast majority of them are, more likely the cost and time over-run. These cost over-runs are a combination of factors that cannot be controlled, under-estimation of the likely challenges, and "strategic misrepresentation" or "deception" associated with the interest to get the project approved in the first place. Further, the higher cost over-run with private projects may be an over-estimate. In case of private or PPP projects, the financial closure is an important milestone and is invariably done with great rigour. To this extent, the estimate that is used as a benchmark to calculate over-runs is a good measure of the project cost.

In contrast, in public financed projects, though it too has a financial closure, the original cost estimates are likely to be less reliable. For a start, since budget support is involved (both in grant allocation and loan repayments), Departments are likely to lowball estimates so as to get approvals of the Finance Ministry. Most commonly, some important last-mile components of the project are excluded to keep the estimate low enough to get approval of the Finance Ministry. Lenders too are likely to go along with less diligence given the budget guarantee. Finally, public projects are far more likely to start construction later than private ones.

2. It may be wrong to make costs-benefits assessments based on the traffic realisations and other benefits identifiable immediately after the project is commissioned. Apart from the existing traffic, diverted and induced traffic takes time to materialise. In fact, large increases in traffic, induced traffic, is likely to emerge from unpredictable developments in the vicinity of the road/rail alignments. There is a counterfactual problem in the analysis of such investments.

Consider an investor or entrepreneur deliberating a decision on where to invest on a new manufacturing unit. Transport connectivity would be among his primary considerations. Villages and towns along the alignment, which in the absence of transport connectivity, would not have been even considered as an investment decision, now become attractive location for investors. If the investment happens, the spill-overs from that decision can, over time, lead to very large induced traffic in those locations. And this would be apart from the overall economic development benefits from it. Given that there are likely to be several such investment decisions that different investors contemplate over a very long period of time, the likelihood of actual investments happening due, in large part, to the connectivity is very high.

To this extent, the authors claims of having refuted the new economic geography theorists' arguments about the importance of transport costs in investment decisions appear questionable.

3. On a purely quantitative basis, from the 95 projects analysed, the excess in costs-benefits ratio in just over a quarter of the projects increase due to an over-estimation of benefits. In any case, as mentioned earlier, comparing the traffic realisation immediately after the project completion with the traffic forecasts in the loan documents is almost a meaningless exercise if we are to credibly assess the long-term costs-benefits ratio of such large projects. Further, the major share of these projects predate this millennium and cover a period when Chinese contractors were building their capacity. To this extent, the analysis does not reflect the phenomenal infrastructure construction capacity that Chinese contractors have developed over the past decade or so.

The Economist writes about the problem with BC analysis, in the context of UK's HS2 project,

The benefit-to-cost ratio (BCR) calculated for hs2, at around one, is hardly a ringing endorsement. But just as the costs of big transport projects are often underestimated, so are their long-term benefits. The extension to London’s Jubilee tube line, for instance, was approved with a bcr of less than one, but recent analysis suggests that it has been more like 1.75. And that includes only the revenues that go directly to the railway, not the economic consequences of the revival of London’s Docklands area, which the tube line made possible. The main point of hs2, similarly, is its impact on the cities and towns along its route and beyond. Boris Johnson, the prime minister, is on a mission to boost growth in northern and western areas left behind by the country’s lopsided, London-centred pattern of growth. On its own HS2 won’t make that happen, but doing so without a new railway would be tough.