The growing worries for pension funds

The growing deficit pile between the assets and liabilities of pension funds, especially in developed economies, should count as one of the least discussed public policy challenges. The problem is masked by the classic time-inconsistency issue - it is not my problem since my successors have to deal with it. But the day of the reckoning may be approaching faster than expected, thanks to quantitative easing.

FT has an excellent read on the troubles facing pension funds. The unavoidable headwind comes from demographics... 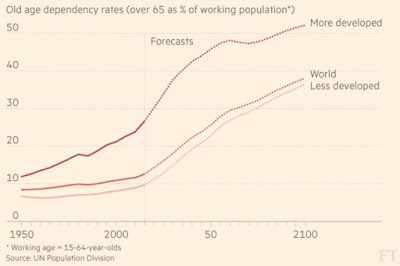 ... which has been compounded by the secular decline in bond yields 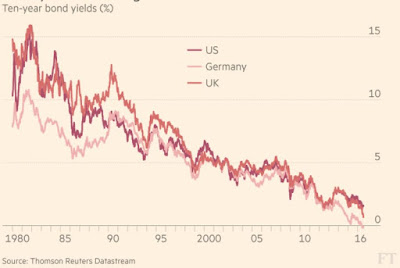 Both these have had the effect of widening the gap between the assets and liabilities of pension funds. 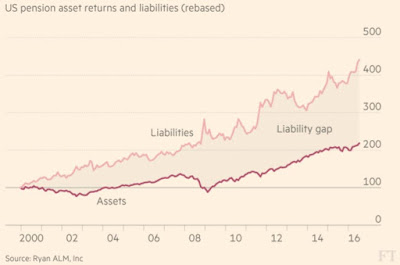 It can, therefore, be said that pension funds face the triple whammy of declining birth rates, increasing life expectancies, and historic low bond yields. While little can be done about the first two, the third has been a largely self-inflicted phenomenon. They have been among the worst affected by the extended monetary accommodation in developed economies and its attendant distortions. Apart from these, lower rates contribute to higher valuations on equities, which in turn limits the expected future returns from the equity portfolios of pension funds.

The latest to experience turbulence from these forces is the world's largest pension fund, Japan's Government Pension Investment Fund (GPIF), which announced a whopping $52 bn quarterly investment loss in the second quarter of 2016.

A few decades back, employers replaced defined benefit (DB) plans with defined contribution (DC) ones. The consultancy Willis Towers Watson estimates that the latter accounts for 48% of the $35.4 trillion in pensions in 19 developed countries today. While the DC plans shifts the risk away from employers, it merely transfers it to the employees, and through them the governments. Consider the scale of the savings challenge,

Many savers started contributing when it seemed reasonable to expect strong returns over their lifetimes. A popular metric was that savers who put away 8 per cent of their income every year for 40 years would be able build up an income of 75 per cent of their final earnings by the time they retired... this approach would have worked with real returns, above inflation, of 5.5 per cent per year. This is roughly what a US-based portfolio of 60 per cent stocks and 40 per cent bonds has achieved since 1951. But if future returns drop by only two percentage points, to 3.5 per cent, savers will need to put aside almost 15 per cent of their income. With bonds and stocks now historically expensive, 3.5 per cent is if anything optimistic... If someone today invested $100,000 in a balanced portfolio of stocks and bonds, they could expect a return of $21,800 over the next two decades after costs. Ten years ago, that same investor might have expected to make $60,000, and three decades ago $150,000... At the end of 2013, the median 401(k) plan held by US households near retirement had a balance of $104,000, according to the National Institute on Retirement Security. Following the typical actuarial recommendation of withdrawing no more than 4 per cent a year, this would provide an annual income of about $4,000.

The actuary, Mercer, estimates that UK's largest 350 listed companies face a pensions funding deficit of £149bn, as their assets, £721bn, far outstrip their liabilities, £870bn. The situation is no different in the US where a doubling (105% increase) of pension fund assets has accompanied a near quadrupling (278% rise) of liabilities, according to actuarial group Ryan ALM. Mercer estimates unfunded pension liabilities among the US S&P 1500 companies to be $562 bn by end-July, up by $160 bn in just seven months!

There are two issues that come to mind. The first concerns how long can the unfunded liabilities widen? Now with rates having fallen sharply to close to the zero lower bound since the Great Recession and not likely to rise much in the foreseeable future, the unfunded liabilities are only likely to widen further. As the article shows, some of them are already facing the crisis on not being able to even finance their current liabilities.

Second, the pensions deficit raises a fundamental question about how much of such social safety nets can be self-financing. Pensions have a very short-history of about a hundred years. Till now, favorable demographics (in terms of rising workforce participation), and long period of post-War economic boom (which kept open a pipeline of attractive investment opportunities), coupled with the transition from DB to DC plans, may have given the impression that pension schemes can be self-financing, at the most require only cross-subsidy. But now, with all these conditions having reversed, the ability of pension schemes, even the DC ones, to meet their objectives is becoming questionable.
Posted by Urbanomics at 3:02 AM