The challenge with attracting foreign investors in infrastructure

The Qatar Investment Authority, the country's sovereign wealth fund, is buying Singapore's Asia Square Tower One from BlackRock for a record $2.45 bn, or $1960 per square feet. This may be of relevance to India as it courts investments from countries like Qatar.

As I blogged earlier, investments will come if there are attractive commercial opportunities. Given the very high levels of risks associated with construction, it is almost certain that these investors will not look towards greenfield infrastructure projects. Further, since such investors are not entrepreneurs, they are unlikely to be attracted towards manufacturing and other desirable economic activities.

They are more likely to invest in either high return assets like real estate or functioning infrastructure assets with stable and low-risk returns. Given that there is already considerable economic activity in the former, and the government would want to avoid resource mis-allocation and bubbles, infrastructure appears the best destination to target.

The stressed assets present an opportunity to draw in such capital. But they are unlikely to invest at prevailing valuations. Bundling a few such assets sector-wise, especially in the power sector, and auction them by forcing haircuts on creditors may be a good platform to channel such capital.


Global pension funds and sovereign wealth funds may invest up to $50 billion in India’s infrastructure sector over the next five years... To put things in perspective, infrastructure attracted a meagre $3.7 billion of investment, both domestic and foreign, in 2015, according to data from Equirus Capital Pvt. Ltd, another investment bank. 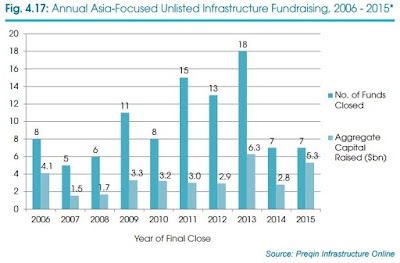 Assuming Asia focused funds to raise $6 bn each year on average over the next five years, half that flows into India, and unlisted funds form only three-fourth of total infrastructure investors (all very optimistic assumptions), the total inflows into India from infrastructure investors would not be more than $20 bn!
Posted by Urbanomics at 7:12 AM