1. Excellent interactive in the Economist on incomes, annual economic growth, and inequality across several countries during the 1980-2015 period. China is already the second most unequal society in the world, after South Africa, even as its middle class has grown richer than Brazil's. In the 35 years, median income has growth at an annual average pace of nearly 12%, to just 3.5% in India. Assuming past growth rates, median incomes will catch up with the US in 10 years for South Korea, 25 years for China, 60 for Brazil, and 100 for India.

2. Nice article on Venezuela. The decline has been stunning,

the government led first by Chavez and, since 2013, by Maduro, received over a trillion dollars in oil revenues over the last 17 years. It faced virtually no institutional constraints on how to spend that unprecedented bonanza... In the last two years Venezuela has experienced the kind of implosion that hardly ever occurs in a middle-income country like it outside of war.

3. Are debt-financed dividend payouts and share buybacks that boost stock prices a massive Ponzi scheme? Yes, says Rana Faroohar in her new book. ExxonMobil's ratings downgrade, first time since 1949 it is not AAA, has a lot to do with its stockpile of debt accumulated to finance share buybacks

4. More news of the damage from weak global economic prospects comes from the woes of container shipping liners,

The industry... is suffering what could well turn out to be the deepest and longest downturn in its 60-year history. Container shipping lines have made a series of investments in new, giant vessels, and this glut of capacity has sent freight rates tumbling. The Shanghai Containerised Freight Index — one of the few public sources of information on what lines are charging to ship a container — last month reached the lowest level since its inception in 1998... Amid a slowing world economy, 2016 could be the fifth straight year of subpar expansion in trade. 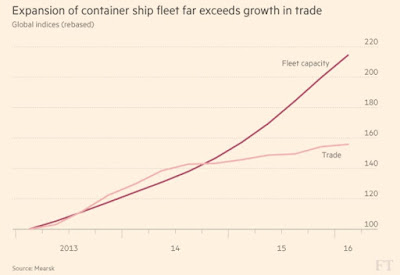 The industry which has expanded aggressively into larger sized ships is now undergoing a phase of consolidation,

In the first quarter of 2016, Maersk generated $1,857 of revenue for each 40ft container it carried on its ships, 25 per cent less than one year earlier, and $203 below the average cost of moving each box.

They ate pork. Lots and lots of pork — 131 pounds of it per person per year in 1870 (that number was half as much by 1929 and is around 55 pounds today). Unlike other meat-producing animals, pigs could live almost anywhere and could survive largely on food scraps. Their meat, easily salted or smoked, could be preserved in an era without refrigeration. Fresh vegetables were scarce; farmers emphasized crops that could be stored or preserved, like turnips, pumpkins, beans and potatoes, instead of leafy greens that would deteriorate quickly... Instead of a toilet, you used a chamber pot or an open window in the city, an outhouse with an open pit underneath in the country... Boston had 700 horses per square mile. The average horse produced 40 to 50 pounds of manure and a gallon of urine daily, which made the streets of major cities no pleasant place to be.

By today’s standards, entertainment options were limited. Total circulation of newspapers was 2.6 million in a country of 40 million people. There was no telephone, record player, movie or radio. Men could go to the local saloon to drink; women generally couldn’t. Vacations and weekends were not really a thing.

Childbirth usually took place at home, and deaths were common both at birth and during early years from diseases like yellow fever, cholera and many others. There was no licensing of doctors, so quacks were common.


The most fundamental shift over those decades was that the American home became, in Mr. Gordon’s word, “networked.” Houses that were once dark and isolated were becoming intertwined. They were starting to be connected to electric grids, providing clean, bright light without emitting smoke. Urban water networks supplied clean water, and sewer systems removed waste without the pungent odors of chamber pots and outhouses. Telephones allowed people to converse with distant friends. These advances were enabled not just by technological innovation in plumbing and electricity, but also by urbanization. In 1870, 23 percent of the United States population lived in cities, which rose to 51 percent by 1920.

6. The consortium hired to reconstruct and operate a new terminal at LaGuardia for 35 years secured $2.5 bn of financing through a municipal bond offering which attracted considerable interest. The Baa3 rated (one notch above junk) 30-year 2046 bond was priced with a yield of 3.27% and a 5% coupon. A Bank of America Merrill Lynch index of triple-B-rated munis across multiple maturity dates yielded 2.88%. This is against 2.6% yield for 30 year US Treasuries. The consortium, LaGuardia Gateway Partners, includes airport operator Vantage Airport Group, construction company Skanska, and Meridiam Infrastructure, an investor and asset manager of infrastructure projects.

Two observations. One, the very low rates and spread between the Treasuries and risky bonds, despite the near-junk nature of the muni, underscores the point that this is a truly unprecedented opportunity for governments to borrow and invest in improving infrastructure. Two, the consortium presents the ideal mixture of contractor, operator, and financier, a partnership with clearly defined roles and risk allocation which allows for seamless changes in shareholding patterns. In contrast, in countries like India, the concessionaires are invariably construction contractors who develop and then try to either sub-contract maintenance or exit by selling stakes. Apart from creating perverse incentives, such arrangements may, ironically enough, end up increasing life-cycle costs.

7. How can rising cash reserves and debt burden subsist together? A new Moody's report shows that the US corporate cash reserves rose to $.17 trillion by end-2015, with $1.2 trillion held overseas. For the first time ever, the top five cash hoarders with $504 bn were tech companies - Apple ($216 bn, 93% held overseas), Microsoft, Alphabet, Cisco, and Oracle. 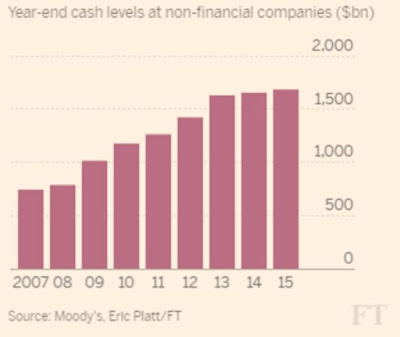 The rising hoard is a reflection of two trends - tax arbitrage and avoidance, and weak economic expectations and the consequent reluctance to invest. In fact, the report points out that expenditures on things like new equipment declined 3% to $885 bn on the face of lower commodity prices.

Interestingly, the rising cash reserves have accompanied rising debt. Overall debt rose nearly $850 bn to $6.6 trillion by end-2015. In fact, over the past five years, while cash reserves increased by about $600 bn, debt obligations surged by $2.8 trillion. While the top tier firms too leveraged up, the increased indebtedness was concentrated in smaller and lower quality groups who took advantage of the record low borrowing costs.

8. Citylab points to stunning visualization of property price trends developed by Trulia of 100 largest US metros. The biggest increase was in San Francisco, where the percentage of million dollar homes rose by a staggering 37.8 percentage points from 19.6% to 57.4% of all houses in the 2012-16 period.

Some of the increases in the city neighborhoods have been jaw-dropping - in Westwood Park the percentage rose from 2.9% of homes to 96%!

9. Upshot puts New York's restrictive nature of zoning regulations in perspective by pointing to a study of 43000 buildings which found that 40% of buildings in Manhattan could not be built today. These restrictions include height, limits on residential and commercial space, limits on the number of dwelling units and parking lots, setback rule that mandates buildings to step back in order to rise (saw-tooth structure) etc. 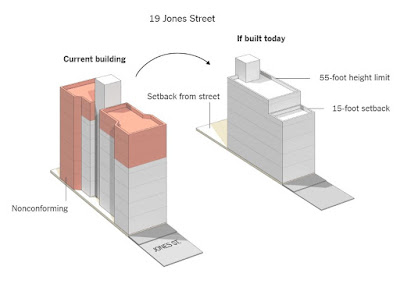 Relaxation of zoning regulations is arguably one of the very few low hanging fruits in public policy space. It is also possibly the only way in which cities, especially in developing countries can avoid extreme gentrification and accommodate the millions of urban migrants.

10. Upshot reminds us about the critical role of luck in determining life outcomes,


According to a 2008 study, most children born in the summer tend to be among the youngest members of their class at school, which appears to explain why they are significantly less likely to hold leadership positions during high school and thus, another study indicates, less likely to land premium jobs later in life. Similarly, according to research published in the journal Economics Letters in 2012, the number of American chief executives who were born in June and July is almost one-third lower than would be expected on the basis of chance alone. Even the first letter of a person’s last name can explain significant achievement gaps. Assistant professors in the 10 top-ranked American economics departments, for instance, were more likely to be promoted to tenure the earlier the first letter of their last names fell in the alphabet, a 2006 study found. Researchers attributed this to the custom in economics of listing co-authors’ names alphabetically on papers, noting that no similar effect existed for professors in psychology, whose names are not listed alphabetically.

11. The growth dynamics of the newly constituted Bank Board Bureau (BBB) in India may be a teachable example of how institutions can go astray. The BBB was notified in February 2016 primarily to "recommend for selection of heads of financial institutions". The popular former Comptroller and Auditor General of India, Mr. Vinod Rai, was appointed its chairman.

After assuming charge, Mr. Rai has waxed on the bank bad assets resolution process, reassured that bank chiefs will not be questioned over the bad asset resolution decisions, and discussed consolidation of PSBs. I am confused. Is the BBB's mandate so wide enough to cover all these complex regulatory issues? If BBB, which advises on appointments, assumes a role in operational management, then isn't there a serious conflict of interest? If so, where do the BBB's role end and the banking regulator's begin?

Or is it a case of "Mission Creep" by BBB, a feature that, once the judiciary showed the way with its liberal interpretation of Public Interest Litigations (PILs), has come to characterize institutional development in India? The hyper-active media have obviously only been too eager to nudge a willing Mr. Rai into these transgressions.

This is certainly going to generate much discussion in the days ahead. A few quick observations. Clearly, depositors are ring-fenced off and that takes bank runs off the table. Fundamentally, this is substantively the same as directly mandating higher capital reserves, though framed very differently. Is the framing, in terms of informing the creditors and shareholders their 'haircuts' upfront, likely to be more acceptable? Most importantly, the critical issue here would be the normal time price-discovery with riskier assets. It assumes that central banks can more accurately assess the real value, especially when they become stressed, of these assets than the financial institutions themselves. Further, it also assumes that the central banks can avoid the cognitive bias and environmental pressures that force banks to systematically under-estimate and underprice risks during good times. In fact, it assumes that the 'pawnbroking price' would be a more accurate signal than even those of rating agencies.
Posted by Urbanomics at 8:55 PM