More on saving capitalism from capitalists

Privatization of profits and socialization of losses is an increasingly common feature of modern capitalism, one which threatens the credibility and sustainability of capitalist enterprise and invariably provokes a populist backlash. It has become a disturbing feature across the world that even as promoters grow rich, their businesses become enfeebled and poor.

The latest is British Home Stores (BHS), the British department stores chain with more than 11,000 employees, and its promoter,

Sir Philip Green bought the business... for £200m in 2000. He and his family received £586m in dividends, rental payments and interest on loans before he sold BHS for just £1 last year... Meanwhile, the BHS pension fund fell from a surplus of £17m in 2002 to a potential deficit of £571m today, a sum strikingly similar to the profit taken out of the company by the Greens. BHS has not made a profit since 2008... By paying bigger dividends than would have been possible without, among other steps, underfunding the pension fund and in effect paying dividends out of borrowed money, the Greens were able to withdraw large sums from the business. Without the necessary investment, and saddled with debt, the company has simply not been able to compete in a highly competitive sector...

the buyer of BHS, Retail Acquisitions... has failed. Why did the directors permit a serious business, with significant pension liabilities, to be acquired by a group that had no chance of turning it around? Of course, this has not stopped the new owners from taking more than £25m out of BHS for just over a year’s work, albeit including more than £11m for legal and professional fees.

The asset stripping happened this way,


Over the 13 years from 2001, and despite a brief surge between 2006-08, capital expenditure totalled just £349m. That was far below BHS’s £438m cumulative depreciation charge, suggesting the shops were becoming more worn out... For the first few years, tough cost control allowed profits at BHS to recover. This helped the company to pay £423m in dividends between 2002 and 2004, allowing Sir Philip not only to recoup the purchase price, but more than twice that amount just a few years after taking control... a large chunk of them — some £290m — was paid when the pension fund was already in deficit... Another issue is that the dividends not only far exceeded the profits made in the years they were paid, they dwarfed the total cash profits of £223m made by BHS over the entire period of Sir Philip’s tenure... other tactics that may have further reduced financial flexibility... included selling a number of freehold stores to a company controlled by Lady Green, which then proceeded to levy rents on them. BHS was also charged nearly £600m for management services, which far exceeded the amounts charged by Storehouse and escalated even as the business shrank.

The FT article is spot on with its assessment,

This is the dark side of capitalism: in­creased borrowing and payment of ever bigger dividends; risk transferred from the private to the public when the business fails; the low paid and the taxpayer left to pick up the bill. It is all worryingly reminiscent of the 2008 banking crash... The BHS story is a case study in many unpopular aspects of modern capitalism: exploitation of limited liability, loophole-ridden tax law and intricate accountancy.

In this context, the news that Indian corporates have been making generous dividend payouts despite anemic profits growth deserves closer scrutiny. The dividend paid by a sample of the country's top 144 listed companies more than tripled over the past five years whereas profits increased by 50%,

These companies will pay Rs 61,087 crore in equity dividends to their shareholders for FY16, an increase of 19.2 per cent year-on-year compared to Rs 51,262 crore in FY15. In comparison, their combined net profit is up only 5.7 per cent year-on-year in FY16... In FY16, companies in the sample will share 43 per cent of their net profit as dividend, up from 38 per cent in the previous year and 19.3 per cent in FY11. In FY15, BSE 500 companies had together paid equity dividend of Rs 1.45 lakh crore. The combined dividend payment by these 144 companies has clocked a compounded annual growth rate (CAGR) of 26.7 per cent during the past five years, which is more than thrice the underlying growth in earnings. The combined net profit for the sample grew at a CAGR of 8 per cent during the period.

A similar trend is visible in the historical data for the S&P BSE Sensex 30 companies, though less pronounced. In the last five years, the underlying dividend pay-out by the index companies has grown at a CAGR of 13 per cent, against 7.5 per cent CAGR growth in their underlying earnings per share during the period. Sensex companies now pay around 30 per cent of their net profit as dividends up from around 22 per cent in April 2011. 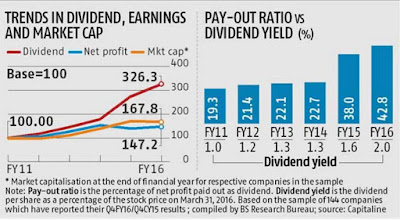 This trend raises concern, especially given the country's none so stellar record on corporate governance and regulatory oversight. A 40% dividend payout ratio is par for the course in developed markets with mature businesses. But in a growing market, businesses are more likely to invest in expanding their businesses than returning capital. In fact, a combination of steeply rising dividend payout when the profits are flat, coupled with stagnant corporate investments, increases the likelihood that businesses are dipping into their reserves to satisfy their shareholders.

This too may be alright, at least legal. Unless there is some asset stripping going on. Many Indian firms are thinly capitalized and labor regulations poorly enforced. What if there are Philip Greens and BHS's who are stripping assets even as their EPF or private pension funds are being starved? It  would not be one bit surprising. Maybe an opportunity for greater regulatory scrutiny.

On the same theme, there is a fascinating article in New Yorker on the SEC investigations against Goldman Sachs for its Abacus investment deal made on behalf of hedge fund John Paulson & Company. The deal involved the sale of risky mortgage bonds to Goldman's clients, whose counterparty was John Paulson & Company. In the article, James Kidney, the SEC lawyer who was part of the investigations, bemoans the "capture" of SEC and narrates how the regulator chose to refrain from pressing criminal charges against senior Goldman executives in return for monetary fine and indictment of a low-level trader.

In fact, Mr. Kidney describes the SEC as "an agency that polices the broken windows on the street level and rarely goes to the penthouse floors". The article describes Kidney's assessment of the reasons for this attitude of the regulators like SEC,

The oft-cited explanations—campaign contributions and the allure of private-sector jobs to low-paid government lawyers—have certainly played a role. But to Kidney, the driving force was something subtler. Over the course of three decades, the concept of the government as an active player had been tarnished in the minds of the public and the civil servants working inside the agency. In his view, regulatory capture is a psychological process in which officials become increasingly gun shy in the face of criticism from their bosses, Congress, and the industry the agency is supposed to oversee. Leads aren’t pursued. Cases are never opened. Wall Street executives are not forced to explain their actions.

Such egregious excesses and jaw-dropping brazenness, and the failure of gatekeepers to regulate them is, unfortunately, an increasingly commonplace feature of economies across the world. At a time of widening inequality and alarming concentration of incomes at the very top of the income ladder, it chips away at capitalism's credibility.

Postscript
FT, one of the most passionate defenders of capitalism, does a major disservice to its cause, by valorizing and dignifying this fugitive. It should count as one of the lowest points of FT journalism.
Posted by Urbanomics at 7:45 AM