LNG fact of the day

The first cargo of LNG exports from the United States is set to sail this week from Cheniere Energy's Sabine Pass LNG plant on the coast of Louisiana, "marking the arrival of US as a gas supplier to the world". The Sabine Pass terminal is one of the 54 projects under consideration or execution in the US, with capacity to liquefy nearly 60% of US gas production. 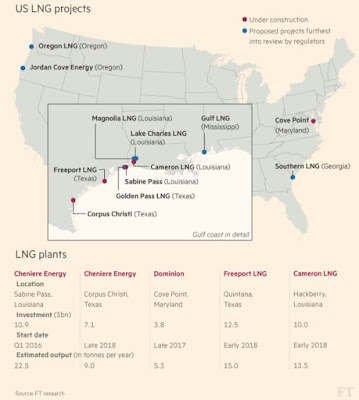 It comes at a time of deep flux in global energy markets,

The price of LNG delivered in north-east Asia, including Japan and South Korea, the world’s two largest markets... has dropped to about $6.65 per million British thermal units, just a third of its price of almost $19 per mBTU two years ago... At that price, with benchmark US gas at about $2.40 per mBTU, plus liquefaction costs of $3 to $3.50 per mBTU, plus transport at about $2 per mBTU, LNG from Louisiana or Texas does not look commercially attractive. Similar calculations apply in Europe. Benchmark UK National Balancing Point gas has dropped by almost a half since 2013 to about $5.20 per mBTU, meaning that LNG exports from the US to Britain are unlikely to cover all of their costs.

Since 2013, most of the new LNG projects launched worldwide have been in the US. However, the deteriorating economics make it unlikely that any new plants will be approved for a while. The plants that have already started construction, though, are highly unlikely to be stopped. This is because the companies buying LNG from one of these plants have typically made firm commitments for 20 years under which they have to pay the charges they have promised, even if they do not use the capacity. The US LNG projects will add to global oversupply. Bernstein Research has estimated that the world’s liquefaction capacity will in the next three years rise by 90m tonnes per annum, which is about 35 per cent of present demand... US LNG should help hold gas prices down for a few years at least.

Its more fundamental impact will be in terms of setting in motion forces that would lead to the creation of a unified global natural gas market. In the current deeply fragmented global energy markets, price discovery is done on the basis of oil price and there are no spot markets for natural gas. In India, it raises more questions about the logic behind the current gas pricing formula.

The Economist says that a global market with a market pricing mechanism is emerging in natural gas and a bear run in its prices is to be expected. Massive capacity expansion - an expected increase in global LNG availability by a third over the next three years - will push over-capacity to about 10%. A surge in demand for LNG from Japan, S Korea, and China, in the aftermath of 2011 Fukushima tragedy drove the investments in liquefaction trains and regassification terminals. But the demand has since waned, leaving capacity idle and plunging spot prices. 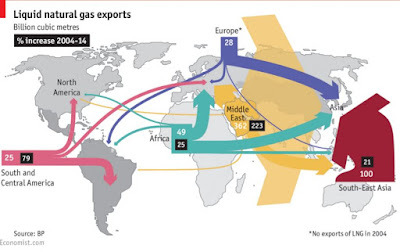 Update 2 (25.03.2016)
Bloomberg points to the converging natural gas price with coal prices in China, more signs of the emergence of a single global market in natural gas.

Posted by Urbanomics at 7:52 AM