The China Effect on the World Economy

Times has five excellent articles about the China effect on the global economy. The earlier ones were on the country's efforts to use its deep pockets to win diplomatic allies and secure natural resources, especially in Latin America, Africa, and Middle East, and the impact of Chinese slowdown on the multinational corporations and commodity exporting countries. To get a sense of the latter,

Vale, the Brazilian mining giant, is racing to unload assets. In Australia, Vale and its Japanese partner, the Sumitomo Corporation, sold a coal mine in July for just $1, after it had been valued at more than $600 million three years ago. In Argentina, Vale is trying to sell a potash mine in which it invested more than $2 billion.

The recent articles include one on the soaring Chinese investments in US real estate. Constrained by investment opportunities at home and a stock market crash, coupled with recent capital account liberalization measures, Chinese savers have been scouting investment opportunities abroad in large numbers. As part of the liberalization, insurers have been allowed to invest 15% of their assets overseas, of which just 1.44% has so far been estimated to have been invested abroad. The Times writes,

This year, Chinese families represented for the first time the largest group of overseas home buyers in the United States. Big spenders on new homes are helping prop up local economies in the Midwest. But in dense areas like San Francisco and Manhattan, they are also affecting the affordability and availability of housing, as demand outpaces supply and bidding wars ensue. While Chinese purchases make up a small sliver of overall sales in the United States, they have had a disproportionate impact on the market for more expensive properties, buying one in 14 homes sold for more than $1 million. On average, buyers from China, including the mainland, Taiwan and Hong Kong, pay $831,800 for a home, more than three times as much as Americans spend, according to a National Association of Realtors survey...

Some Chinese are buying homes purely as investments, capitalizing on surging rents in many parts of the United States. Others are trying to move their money beyond the reach of the Chinese government. Many buyers have their children’s education in mind, picking up homes in good school districts or close to universities. At the upper echelon, the wealthy are hoping for green cards, joining with developers to take advantage of a federal program that fast-tracks them for residency. 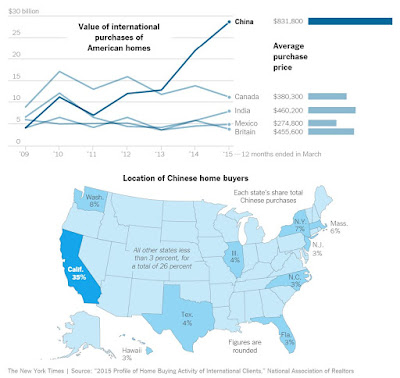 The scale of such spending, and the larger capital outflows from the country, is staggering,

Chinese buyers spent $28.6 billion on American homes in the year ended in March, more than double their purchases two years before, according to the Realtors association. Chinese purchases in overseas commercial real estate jumped 49 percent last year, Jones Lang LaSalle, a big real estate brokerage firm, has estimated. The real estate deals follow a broader exodus of money from China to countries and companies around the world. An estimated $590 billion moved out of China in the 12 months through June, according to Fitch Ratings. And the amount of outflows most likely set a record in the third quarter, although detailed data will not be available until next month. In the past, they tended to stay under $200 billion a year. 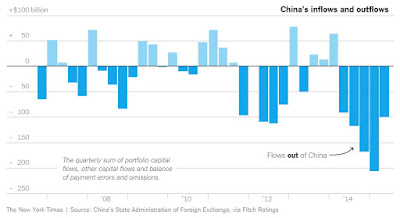 And the Chinese buyers' strategy to buy in cash has given them an edge over even the locals,

For typical American home buyers who require mortgages, the influx of Chinese money makes it even more challenging in markets facing low inventory and rising prices. A majority of home purchases by Chinese buyers — 69 percent — are entirely cash, according to the Realtors association. Such bids often rise to the top for sellers who can then close on a deal in little more than a weekend. Even in Silicon Valley, a market awash in millionaires, Chinese buyers — if they pay cash — can edge out tech entrepreneurs whose wealth is tied up in stock options.

Chinese students, who make up 31% of international students in American colleges, are an important driver. Parents of these students find it far cheaper to buy a home in the US than in their own larger cities. Some others have been purchasing homes in good school districts so as to get their children have school education in the US.

Chinese investors have been particularly aggressive at using a federal visa program called EB-5 that allows overseas citizens to put $500,000 to $1 million into a project that will create at least 10 jobs. Investors can get a green card in about two years. So far this year, 86 percent of the EB-5 visas issued worldwide have gone to Chinese.

This rush of Chinese (and other overseas) buyers has had the effect of putting upward pressure on property prices in many cities across the world. Its impact has been mixed,

Hong Kong and Singapore have each imposed 15 percent taxes on nonresident buyers of residential real estate. In Australia, the state government of Victoria, which includes Melbourne, introduced a 3 percent tax on overseas buyers. Still, some places are welcoming the economic activity. City coffers benefit from stronger property tax revenue. Many overseas arrivals are relatively wealthy, spending on new cars and furniture as well as everyday shopping and dining. The interest from Chinese buyers is reshaping demographics in Texas. As the volume of Asian purchases grow, the number of Mexican buyers, historically the largest category from abroad, is leveling off.

Another article explores the growing dependence of Nigerian economy on China and the backlash it appears to have generated. Like elsewhere China has lent billions to build roads, railway lines (including a $875 m high speed line between Abuja and Kaduna), airports, power plants and other infrastructure, in return for securing access to mineral resources. Nigeria is the largest overseas customer of Chinese construction companies at $24.6 bn since 2005 and China is the country's top lender. Now, the Nigerian government is investigating corruption in Chinese construction contracts and state governments are struggling to repay loans on many trophy projects. Further, Chinese imports have destroyed local industry and created massive unemployment problems,

In Kano, angry protesters in the streets blame widespread joblessness on China, which is manufacturing African fabric designs in shimmering hues more cheaply than Nigeria. Employment in Nigeria’s textile and apparel sector has plummeted to 20,000 people, from 600,000 two decades ago. In Lagos, authorities are trying to stamp out subpar Chinese electric goods. Imported power strips and wiring have inadequate copper to handle Nigeria’s 240-volt system... Nigerian authorities are stymied. Corruption is endemic, making it more difficult to enforce safety standards. And Chinese goods are so dominant that consumer have few other choices. 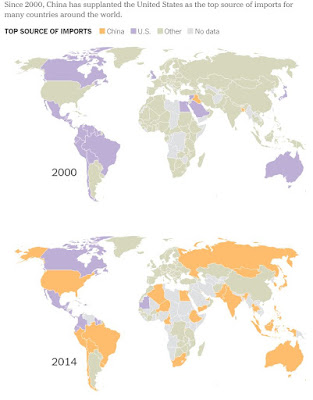 The scale of Chinese overseas lending is staggering,

State-controlled Chinese banks have lent money at rock-bottom interest rates in deeply indebted Nigeria. They have done so based on the assumption that the Chinese government will repay them if Nigeria cannot. A little-known Chinese government agency, Sinosure, has guaranteed the loans. Sinosure insured $427 billion worth of Chinese exports and overseas construction projects around the world in 2013, the most recent year available. The Export-Import Bank of the United States, by comparison, issued just $5 billion worth of credit in each of the last two years.

Another article explores how the Chinese sponsored 57 member Asian Infrastructure Investment Bank (AIIB), which focuses exclusively on infrastructure investments, seeks to upend existing multilateral lending rules of the game. The $100 bn institution is hoped to become an alternative to the traditional institutions like World Bank, IMF, and ADB.

PS: More on China's impact, this being the export of coal power plants,

Since 2010, Chinese state enterprises have finished, begun building or formally announced plans to build at least 92 coal-fired power plants in 27 countries... Once complete, the 92 projects will have a combined capacity of 107 gigawatts, more than enough to completely offset the planned closing of coal-fired plants in the United States through 2020. The expansion is the equivalent of increasing China’s own coal-fired electricity output — already more than twice as much as any other country’s — by more than 10 percent. The overseas push comes as China’s state engineering firms are struggling with declining profits and a glut of coal-fired power plants at home, where economic growth is slowing. Beijing has encouraged state firms to “go out”and seek projects abroad to stay in business, increase demand for Chinese steel and bind the Chinese economy more closely with those of its neighbors.