1. Dani Rodrik makes and assessment of India's economic prospects that deserves the attention of policy makers. When asked about the world's most over-rated economy by Tyler Cowen, Dani replied,

I think India, because I think the kind of growth that India has had, I don’t think it’s sustainable. Partly going back to our earlier discussion about premature deindustrialization. I think they have these plans to significantly strengthen their manufacturing base. I just don’t see it happening. I think India can grow at 4, 5 percent per year on a sustainable basis. I don’t think it’s going to be 8 or 9 percent. When this sinks in, I think there’s going to be a negative overreaction, would be my fear.

One could quibble about whether it is 4 or 5 or even 6, but I would tend to agree that 8-9% on a sustainable basis looks more hope than realism. India just does not have the base - infrastructure, consumers, industries, public spending, agricultural productivity, credit, and skilled labor - to support such growth for too long. These deficiencies feed into the other and constrains rapid growth, beyond very short bursts. On top of all these stand the biggest deficiency of them all, weak state capability.

2. Lant Pritchett is as provocative on learning outcomes as only he can be,

If you want to find a child who lacks education today, the place to find them is in school. That’s because nearly all children are in school. That’s the good news. Governments have built schools and hired teachers. Parents have seen that schooling is key to their child’s future and are sending their children to school... But the bad news is that hundreds of millions of children are starting school, going day after day, year after year, but not really learning. One study found that almost three-quarters of a recent cohort of youth in Zambia were innumerate and six of 10 illiterate. But only 7% of these youth had not attended school. In fact, half of those who were innumerate and a third who were illiterate had not just started school but completed grade 6. These children were being schooled but not educated.

And interesting the call for greater research on learning outcomes,

Research will be an integral part of reaching learning goals. Knowing what you need to know isn’t the same as knowing it or knowing how to do it... Progress on learning goals requires getting systems of education on a much faster pace of improvement. But too little is known about how to do that – which accounts in part for the slow progress. The British government has recognised that and is funding research to generate the practical knowledge needed to improve systems of education.

3. Fascinating map (via FT) that captures the average monthly cost of renting a one bedroom flat within a kilo meter of all London's 250-odd tube stations. See the larger version here. 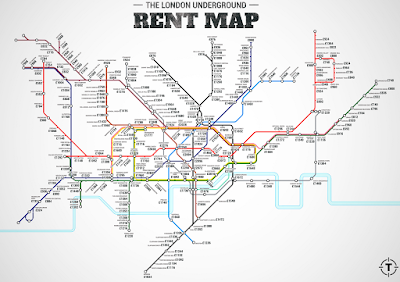 The FT summarizes the affordability challenge,


For the 250-odd Tube stations in London, only a quarter have one bedroom flats costing £1,000 a month or less to rent. As you might expect, these locations are all concentrated at the extremities of lines, meaning a long journey and £225 a month for a zones 1-6 Travelcard. Across the capital, the average rent for a one-bedroom flat within walking distance of a Tube station works out to £1,327. And there are 20 locations where, if you were mad enough, it would cost you above £2,000 a month (all bang in the centre).

Here are interesting sites which show which areas in London are more accessible by bicycles or public transport, another which trades-off average commute times and average rents, and this map of rents on each tube line.

4. Guardian points to the findings from the World Bank-Gallup Global Findex Survey 2014, which asked over 150,000 respondents in 143 countries how and why they access financial services. As the map shows, the North-South divide is clearest in terms of where people spend their borrowed money. 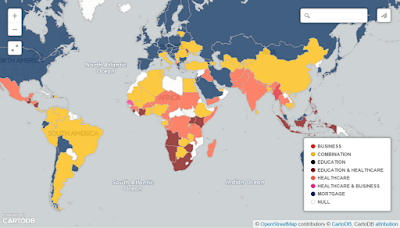 Unlike the North, where mortgage dominates borrowing, in the South the largest share of loans are consumed by education and health care. In India, 21% of people took loans to finance health care needs, 10% to finance education, 9% for business, and just 4% for mortgage.

5. I have blogged earlier about the corrosive political economy impact of the assault on incentives. A disturbing trend may have been initiated by the Maharashtra government in imposing a "drought surcharge" on items like fuel, liquor, cigarettes, jewelry etc for a period of five months to raise Rs 16 bn in tax revenues. Cash-strapped governments are likely to adopt policy interventions like these to circumvent the constraints imposed by the forthcoming national GST.

6. Early this week, the IMF released its assessment of emerging market corporate debt. The graphic below shows the status of non-financial corporate debt to GDP ratio of the largest emerging economies. 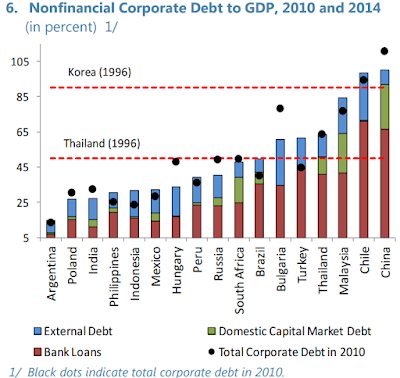 7. On the back of declining corporate capex investments comes news of fall in capital expenditure by public sector units (PSUs). Underlining the weak demand conditions, the Business Standard finds that the capex by 36 largest listed PSUs, who have been sitting on a cumulative cash reserve of over Rs 2000 bn, declined by 23.5% to Rs 1290 bn in 2014-15.

8. The Institute of International Finance (IIF) estimates that net capital inflows into emerging economies may turn negative for the first time this year, with more a trillion dollars of outflows as repayments of foreign currency loans by EM corporates, especially in China. 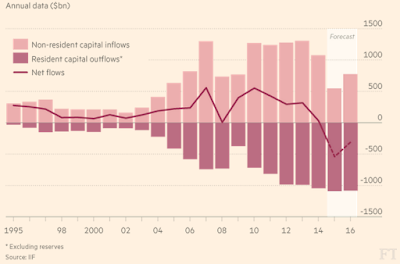 The IIF estimates that indebtedness at EM non-financial corporates has risen five-fold over the past decade to $23.7 trillion. This is a good illustration of the scale of potential debt induced instability,

The IIF estimates that currency depreciation has increased corporate debt in Brazil by an amount equal to 7.3 per cent of gross domestic product, and 6.2 per cent in Turkey, for example.

9. The latest figures on stalled projects in India being tracked by CMIE points to an increase in their stock from Rs 8.8 trillion to Rs 9.9 trillion over the three months to end-September 2015. Interestingly, nearly a quarter of projects are stalled due to lack of promoter interest or commercial unviability. 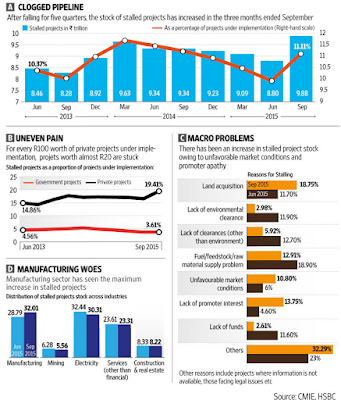 The stalling rate, or stock of stalled projects as a share of all projects under implementation rose to 11% in the last quarter, up from 9%.

Funny that this fact escaped the attention of everyone calling for the release of third arrow of Abenomics.
Posted by Urbanomics at 6:30 AM