Government as engine of innovation

Mariana Mazzucato has a brilliant TED talk on government as investor, risk-taker, and innovator which questions the conventional wisdom on private sector as leading technology innovation with cognitively striking examples of Apple and the pharmaceuticals industry.


Driving home the message that government, and not entrepreneurs, is the real engine of innovation, she informs that the NIH funds 75% of all revolutionary new drugs and that all the core technologies of iPhone (internet, cellular communications, GPS, solid-state memory, siri, touch-screen, capacitive sensors, and microchips) were the result of public innovation. She claims that government spending on research and innovation does more than fix market failure, it creates new products and whole markets. Further, interestingly, this and most other similar innovations and their commercial exploitation is largely confined to the United States. 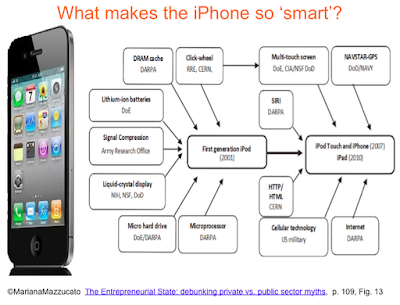 She argues that there is no substitute for long-term, patient government funding for scientific innovation and though the private sector in turn should be allowed to build on these innovations there should be a mechanism to plough back a bigger share of their profits to refinance more public spending on research. She gives the example of Finland's state research agency, SITRA, which retained its investments in Nokia and used the returns to finance newer research areas.
Posted by Urbanomics at 10:00 AM