One of the biggest challenges with affordable housing is to bring down development costs. In this context, time and the resultant cost over-runs are an important factor. Livemint has a graphic which highlights the magnitude of this problem. 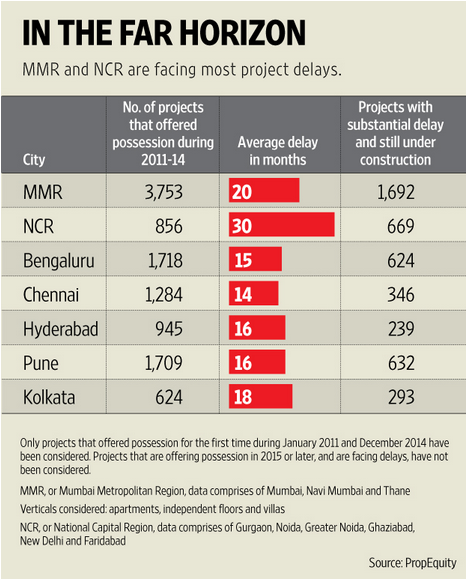 To put this in perspective, for a developer who expects to complete his project in 24 months, a two-year delay nearly doubles his cost of capital. In a business where developers leverage up heavily, the cost of capital is arguably the most important drivers of profitability. Since the margins are very narrow in affordable housing, developers have limited cushion for uncertainties. The risks associated with time over-runs, with its cascading effect on cost of capital, are simply too large for developers to bear.

While developers have to bear a large part of the blame themselves, with their aggressive estimations when the times were good, regulatory problems are atleast an equally important contributor to delays. Developers face harassment in land procurement, land-use conversion, building and other development permits, utility connections, occupation certificates etc, all of which take up inordinate time and layers of cost. This, in turn, erode their profitability and force them into cutting corners with construction quality and other amenities promised to their buyers, leaving them dis-satisfied.

One way to address this problem is to have a system where developers can register any new project and be able to track the status of various clearances. In fact, the entire process from land procurement to construction and occupation, for all housing projects, can be work-flow automated, incorporating all service departments, and its progress monitored on-line so as to minimize the harassment and delays in obtaining these permits. Since the vast majority of these projects are in municipal or urban development authority areas, the Urban Development Ministry in each state can be the nodal agency entrusted with the responsibility of monitoring and ensuring timely clearances. Developers can be encouraged to register by making such registration mandatory for loans, mortgage finance for their purchasers, availing various benefits under government housing programs, and so on. The Real Estate Development Regulatory Authority was expected to do precisely such enabling stuff.

Business Standard has two graphics which highlights the market failure with housing - while housing units absorption rate has declined sharply, prices have risen. 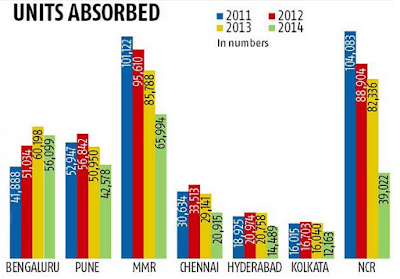 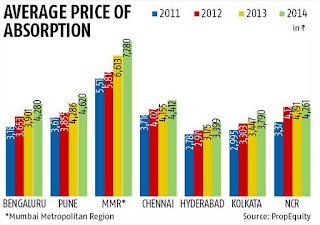 Given the 2-3% rental yields, far lower than the cost of capital, and the marginal appreciation, buyers prefer to stay away.

Posted by Urbanomics at 8:08 AM