In the context of rising medical costs without commensurate improvements in health condition, Tim Taylor points to a JEP paper by David Howard, Peter Bach, Ernst Berndt, and Rena Conti on how the life outcomes of anti-cancer drugs has changed with increasing prices in the US market. Their study, which involved studying the pricing trends of 58 anti-cancer drugs (focused on extending survival times for cancer patients) approved for sale in the US between 1995 and 2013, found sharply launch prices with limited increases in life years (estimated from randomized clinical trials or modeling studies that formed basis of FDA approvals). 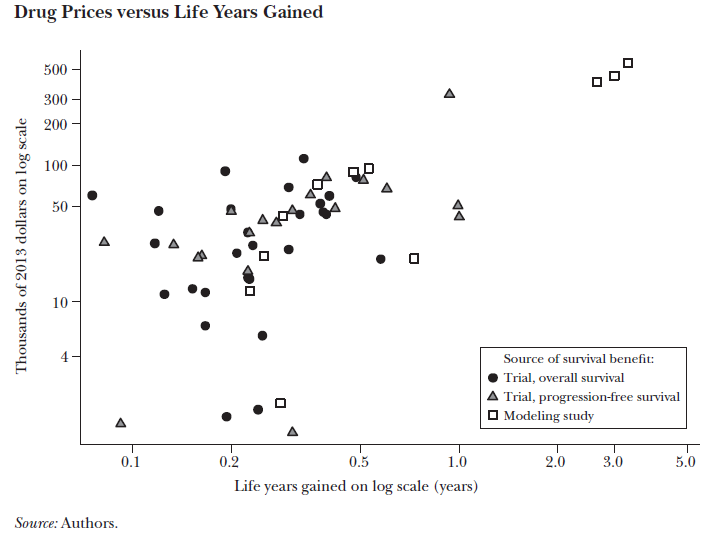 The second graph plots the drug price per life-year gained (price per treatment episode divided by survival benefits) against the drug's approval date. This shows that drugs price adjusted for benefits and inflation rose by $8500 per year. In other words, patients who paid $54,100 for a year of life paid $139,100 in 2005 and $207,000 in 2013. 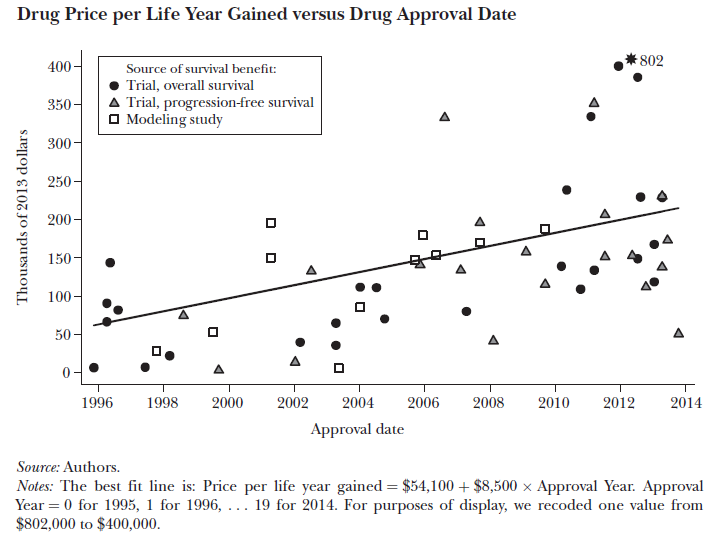 While conventional wisdom on drugs pricing focuses on high R&D costs, the authors claims that the real reasons for these large increases with limited benefits may lie elsewhere. They point to reference pricing - the new drug is priced a little higher than its existing competitor - as one contributor. Further, government programs which mandate pharma companies to sell drugs at a discount to certain buyers encourages them to mark-up their sales price for a higher negotiations benchmark.

At a fundamental level, as the authors of the paper claim, the fundamental challenge in managing health care costs is about how physicians, insurers, and regulators should approach "treatments that are more costly but also offer small incremental benefits".
Posted by Urbanomics at 9:24 AM