The rich and the super-rich

The real story in inequality is the explosive growth of income and wealth at the topmost tier of the income ladder, the top one-hundredth. While the incomes of the top 1% have surged, those of the top 0.01% have rocketed.

Times has this story of how this is reflecting in the market for luxury consumption in the US,


The wealthy now have a wealth gap of their own, as economic gains become more highly concentrated at the very top. As the top one-hundredth of the 1 percent pulls away from the rest of that group, the superrich are leaving the merely very rich behind. That has created two markets in the upper reaches of the economy: one for the haves and one for the have-mores. Whether the product is yachts, diamonds, art, wine or even handbags, the strongest growth and biggest profits are now coming from billionaires and nine-figure millionaires, rather than mere millionaires...

For decades, a rising tide lifted all yachts. Now, it is mainly lifting mega-yachts. Sales and orders of boats longer than 300 feet are at or near a record high, according to brokers and yacht builders. But prices for boats 100 to 150 feet long are down 30 to 50 percent from their peak... The private jet market is splitting in two. Sales of the largest, most expensive private jets — including private jumbo jets — are soaring, with higher prices and long waiting lists. Smaller, cheaper jets, however, are piling up on the nation’s private-jet tarmacs with big discounts and few buyers... According a jet market report from Citi Private Bank, deliveries of new so-called light jets — the smaller, cheaper models — were down 17 percent last year from 2012 and 67 percent from their 2008 peak. But deliveries of the biggest new private jets jumped 18 percent last year...

Oxfam's latest report on global inequality claims that by 2016, the top 1% of the global richest will own half the total global wealth. It also reports that the wealth of the 80 richest people is the same as that of the bottom 50% of population. 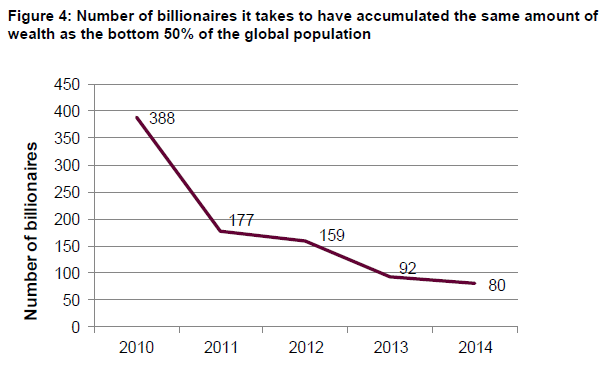 Posted by Urbanomics at 9:14 PM