The politics of widening inequality

Most of the discussions surrounding the global debate on widening inequality has focused on its fairness and its implications on the prospects for future economic growth. A more immediate and pernicious concern is how it affects politics, governments, and the nature of public policies.

Whether we like it or not, any economic policy decision involving regulation, investment, contracting, recruitment, and incentives is essentially a political decision. They generally benefit one group or other, often at the cost of another. Such decisions are invariably influenced by the predilections of those holding the reins of power. And as the graphic below, from a Washington Post article, shows, political activity increases with income levels, for every metric of political engagement. 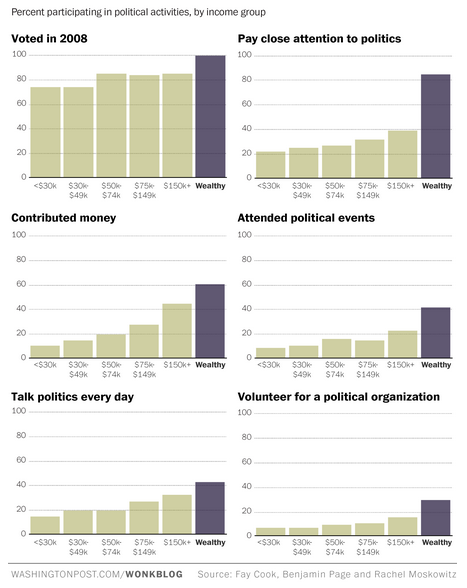 This is most certain to reinforce the already strong economic influence wielded by those at higher income levels, thereby translating economic power into political influence. As the Post article writes,

Our representative democracy is not as representative as it could be. Relative to other income groups, the wealthy are over-represented in the political process simply because they're more likely to participate in it. This means that political debates - and political outcomes - are much more reflective of the interests of a wealthy minority than they are of the middling majority.

This is increasingly true of most countries today, including India. This dynamic which is disruptive of democracy itself is the most disturbing part of the widening of inequality.

Der Speigel has this excellent essay on how widening inequality and other trends have eroded the inclusive nature of capitalism in western democracies.

In this context, one illustration of the channel through which financial power begets political decision-making influence comes from this famous study of how the stocks of certain financial institutions (with which Tim Geithner had some form of connections) rose in the immediate aftermath of Geithner's elevation as Treasury Secretary. The value of connections is universal, playing an important role in translating economic power into political influence in countries across the world.
Posted by Urbanomics at 6:44 AM

Email ThisBlogThis!Share to TwitterShare to FacebookShare to Pinterest
Labels: Inequality, US Government