I am struck by the remarkably neat north-south stratification in this map of global water demand and availability, both in terms of physical supply and access to populations. The entire southern hemisphere is water stressed, in sharp contrast to the entire north which has enough to meet its demand.

In much of Africa and Latin America, and parts of India and China, though availability may not be a problem, access remains poor. But it is in North Africa, Middle East, and Central Asia, where availability is itself a problem, conflicts centering around water bodies are most likely. Already, water sharing from the Nile, Tigris-Euphrates-Jordan Rivers, and Aral Sea are the source of geo-political tensions.

However, there may be another reason why water may be an important source of geo-political conflicts. It is not that people will be fighting for drinking water. In fact, as this latest OECD forecasts indicate, domestic consumption will be dwarfed by other industrial uses of water. Even the demand for agricultural consumption is estimated to decline. But demand from manufacturing sector and power generation (especially from water intensive renewable solar and thermal generators) is estimated to form nearly half the global demand for water by 2050. 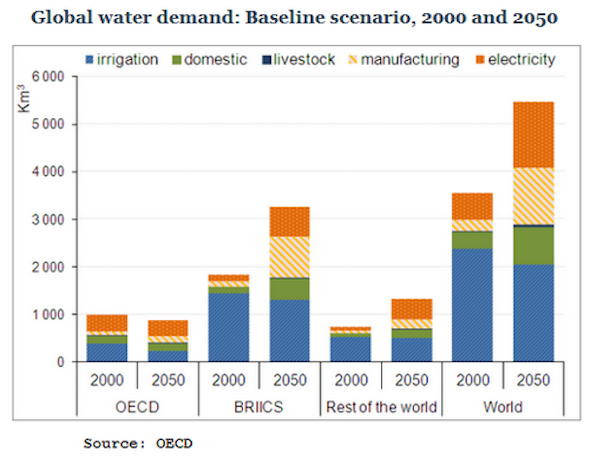 Since a large share of this demand is going to come from the Northern hemisphere, the sharp geographical water-divide will invariably suck in the richer nations too.
Posted by Urbanomics at 5:25 AM