Power sector - back to square one?

A report by consulting firm Avendus Securities estimates that, in the absence of any reforms, the cumulative losses of all distribution utilities in India, as a percentage of the nominal GDP, are likely to reach 1.2% by March 2014. This slippage turns the clock back to the pre-reforms era electricity sector, since between 1999-2002 the losses of state electricity boards (SEBs), as a percentage of the nominal GDP, had surged high to 1.2-1.5%. Then the SEBs were bailed out, and the Electricity Act 2003 and Tariff Policy were formulated. 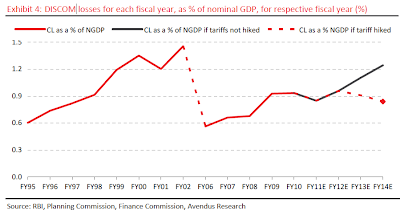 Most worryingly, it also finds that to bridge the widened net gap, the DISCOMs of key states need to raise tariffs at a CAGR of 13–58% in 2012-13 to 2013-14. But the average realized rate (ARR) per unit rose at a CAGR of 1.9-7.0% in 2007-12 period. Even assuming an ARR growth by a CAGR of 11%, it will take nine years for the DISCOMs to achieve profit after tax (PAT) breakeven. But an 11% annual increase in power costs wouldhave a davastating impact on all economic activity. In fact, the report estimates that an 11% annual increase in tariffs may dent industry profits by up to 2.5%. 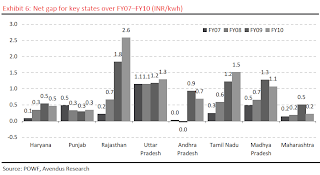 States like Rajasthan, UP, TN, Andhra Pradesh, and Madhya Pradesh would have to significantly raise tariffs if they are to recover from their present situation. 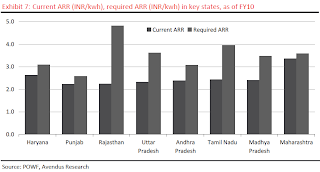 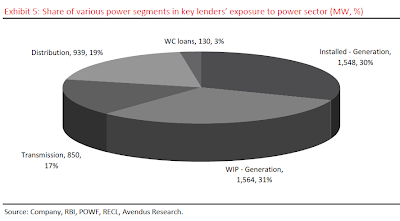 The major contributors to this return to pre-reforms era weaknesses are multiple failures in cost recovery (read, stagnant tariffs), significantly lowering distribution losses, reforming the provision of free power to agriculture, and meeting capacity addition targets. The sole bright spot has been the doubling of the share of private generators in installed capacity from 10% to 20% over the March 2002 to February 2012 period. Furthermore, 62% of the current capacity addition projects are being executed by private companies.

The report recommends three next stage of power sector reforms - allowing pass through of imported coal costs, tariff increases by DISCOMs, and expedited approvals for captive mining coal blocks. Recent examples of changes in Indonesian mining law and additional taxes imposed on miners in Australia has led to a rise in costs and made many PPAs economically unviable.
likely to restore the economic viability of private investments into such projects.

This is all the more troubling given the massive quantity of WIP generation capacityaffected by this. Out of the coal-based WIP capacity of 95000 MW, 31% being executed by state and central generators are to be sold on a cost-plus basis to DISCOMs, while of the remaining 69% executed by private companies, 59% (includes both PPAs and merchant plants) does not have cost pass-through. 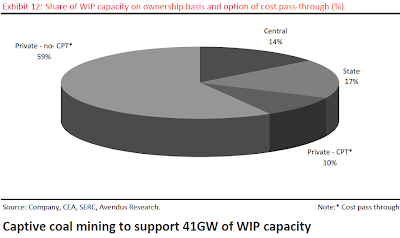 Another major concern is with the slow pace of regulatory approvals for coal blocks allotted as captive mines. An estimated thermal capacity of 45000 MW was approved in 2006-10 with fuel linkages to undeveloped captive coal reserves. However, the Ministry of Environment's refusal to accord regulatory clearances have held up their development. The report estimates captive mines to support upto 41000 MW of capacity addition when they are fully exploited.

In the absence of tariff increases, the debt-laden and fiscally strained DISCOMs are averse to purchasing power from traders and exchanges. Instead, they prefer to suppress demand with massive load -shedding. This in turn keeps the demand down and keeps merchant generators from operating at their full capacity. Faster regulatory approvals for captive mines will reduce the reliance on imported coal.

In this context, the Planning Commission appointed Shunglu Commission has made several recommendations to reform the distribution utilities. It has suggested the establishment of an SPV to buyout the distressed debts of banks to DISCOMs, with about 76% of its share capital to be owned by the RBI and the rest by PFC and REC. The loan repayment would be rescheduled after the states and their DISCOMs agree to certain pre-conditions on tariff increases, operational parameters, interest rates, repayment period etc. The RBI would then provide a line of credit to the SPV for buying the debt from the respective banks. This report also advocates that in an event of the DISCOMs defaulting on their ARR filings, the SERCs would have the power for suo-moto tariff revision. Further, in case the DISCOMs default, the state governments would have to repay the loans.
Posted by Urbanomics at 6:19 AM