Frank Muraca has a nice post on possible reasons for India's slower pace of urbanization. He points to a recently released report on American cities by the McKinsey Global Institute (MGI), which has a couple of interesting graphics relating to India's urbanization trends. 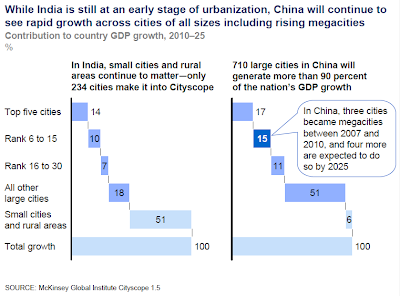 In fact, unlike the other major emerging economies, India has not experienced an urbanization boom of comparable proportion. The decadal growth in urban population has not shown any appreciable increases. 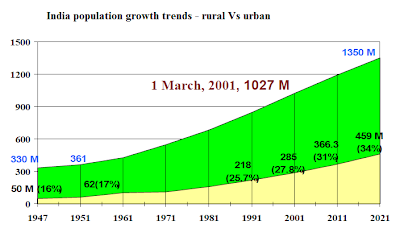 The report attributes India's slower pace of urbanization to two factors. One, state borders limiting mobility and resulting in "urban economic concentration in state hubs rather than city clusters across the nation". Two, policies that have traditionally "favored small-scale production and discouraged larger-scale operations in cities". 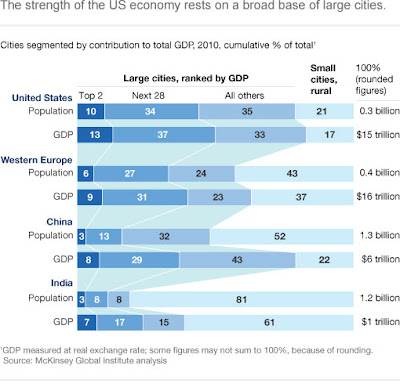 Further, in comparison to other countries,the contribution to GDP of cities outside its top two metropolises is small. In fact, the share of its Tier III cities is smaller than even that of its Tier II (28 cities). This is a reflection of the low priority that urban development holds in India's development paradigm. As Frank posts, quoting an MGI report on India,


India spends only $17 per capita annually on urban capital investment, compared with $116 per capita in China and $391 in the United Kingdom. In addition, India's current urban spending varies dramatically according to the size of city. Tier 1 cities spend an average of $130 per capita each year, with 45 percent of this total on capital spending. However, owing to high general and administrative costs, most Tier 3 and 4 cities support per capita capital spending of only $1 currently.

One of the biggest takeaways for India from these cross-country comparisons on urbanization and economic growth trends is to dramatically increase the focus on urbanization, in particular, the growth of its Tier III and smaller cities. While many of the top 30 cities may or will, in near future, have access to several sources of capital to trigger the civic infrastructure investments required to support their growth (both by attracting populations and investments), the same cannot be said about the Tier III and the smaller cities. Nearly 40% of the urban population is located in 4728 smaller cities with population less than 100,000. These cities will require massive public investments from the state and central governments before they can start thinking about sustainable growth.
Posted by Urbanomics at 6:27 AM