As part of Europe's efforts to unfreeze the credit markets and kick-start economic growth, the ECB conducted its second round of lending to Euro zone banks on 29th February under its longer-term refinancing operation (LTRO). More than 800 banks borrowed €529.5 billion, or $713 billion, in three-year loans at the benchmark interest rate of 1% by pledging collateral, typically bonds or other liquid securities. The ECB does not disclose which banks take out loans or where the banks are based for fear of stigmatizing those banks.

In the first round in December, 523 banks borrowed €489 billion at the same terms. The increased demand in this round is a reflection of the gravity of the credit squeeze being felt by Eurozone banks. Further, relaxations in collateral requirements aimed at helping the several smaller and community banks take advantage of this credit window may also have added to the loan off-take. These banks are more likely to lend to businesses and consumers.

It is hoped that this credit infusion will help ease fears of a banking meltdown and restore market confidence. The longer tenor of the loans was intended to provide the banks with the breathing space to get things right even if the credit markets take some time to get back to normal. The challenge now will be to get these banks to start lending to businesses and consumers so that the stalled economies in many Eurozone countries can be revived. In fact, though given to banks, these liquidity infusions serve as a backdoor support to distressed sovereign bond markets. Evidence from the first round show that many banks have used atleast a part of this money to buy sovereign bonds and thereby keep borrowing costs lower for the peripheral economies.

However, though the ECB has lend more than a trillion euros over the two rounds, the actual amount of new money flowing to banks is closer to €520 billion, because many banks shifted money from shorter-term ECB loans into the three-year loans. Further, though the money injections have been substantial, it has not led to the revival of the interbank market, in which banks lend excess cash to each other for short periods. Banks have preferred to keep their excess cash in the safety of the ECB, despite the 0.25% interest rates paid by it.

Finally, there is the danger that this easy credit will only postpone the inevitable and prevent banks from taking the tough decisions required to put their house back in order. Critics argue that it will take the pressure off banks and governments to reform by providing easy credit and by also keeping down sovereign borrowing costs.

The real test of whether these policies are succeeding will be the emergence of signals that banks have started lending again to businesses and consumers. In particular, any signs of revival in the corporate bond market will be closely watched. Ultimately, given the depth of the slowdown, as reflected in the rising unemployment rates, these measures will need to restore economic growth. Robust economic growth is the only way in which these economies can pull themselves out of this crisis.

Update 1 (10/3/2012)
Greece finally managed to arm-twist its private creditors into accepting a 75% haircut on Greek government bonds. Nearly 86% of creditors accepted the deal, and the final figure is expected to be more than 95%. It had warned that without such a deal, Greece might be forced to default altogether, with no one getting paid. The outcome has enabled Greece to reduce its debt load by just over 100 billion euros, or about $132 billion. This makes it the largest private debt write-down in history. 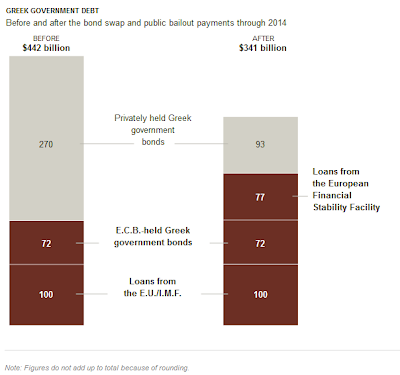 The International Swaps and Derivatives Association ruled that the agreement was a technical default by Greece. This will enable payouts on CDS contracts that various investors had taken out on the privately held Greek debt. Around $70 billion in default swaps on that debt are outstanding, although analysts expect the net payout to end up at only $3.2 billion or so.

Now, the bulk of Athens’s 260.2 billion euros ($341 billion) in remaining government debt will now be held by the IMF, ECB and the individual European nations that have lent Greece money through the EFSF and contributed to the region’s bailout fund. This means that any further haircuts will hurt the sovereign lenders to Greece. Further, since the IMF will balk at haircuts, the bulk of any future haircuts will have to be borne by Europeans themselves. The Times writes,

As recently as 2008, virtually all of Greece’s government, or sovereign, debt was held by private sector bondholders, chiefly banks and investment funds. But as a result of Greece’s escalating debt crisis and intervention by public institutions, private creditors now hold only 27 percent of Greece’s debt.

And even after the write-down, Greece is estimated to be saddled with a debt-to-GDP ratio of 151 percent in 2012, and 149 percent in 2013. The Greek economy shrank by 7.5 percent in the fourth quarter, and its youth unemployment is at a staggering 51 percent.
Posted by Urbanomics at 6:57 AM