Subsidies - back to square one?

Subsidies as a percentage of central government budgetary expenditure is at an all-time high and as a percentage of GDP is fast approaching its 1990-91 peak. The graphic below appear to indicate that the much discussed subsidy reforms over the past two decades may have come to naught. 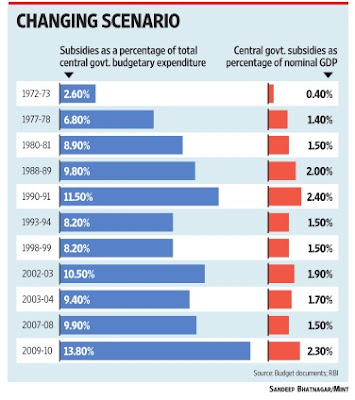 On the back of weakening rupee and high global oil price, fertilizer and fuel subsidies have risen alarmingly. Fertilizer subsidies, estimated currently at Rs 95000 Cr, are sure to breach Rs 1 lakh Cr. Fuel subsidies are expected to touch Rs 1.3 lakh Cr.

The newly promulgated Food Security Bill, which gives legal entitlement of 7 kg of rice, wheat and coarse grains per month at the rate of Rs 3, Rs 2, and Rs 1 respectively to over 63% of national population, has increased the food subsidy burden by another Rs 27,663 Cr to about Rs 95000 Cr.
Posted by Urbanomics at 6:19 AM