The experience from Great Recession has once again conclusively shown that as the economy weakens, the under-privileged and disadvantaged are the most vulnerable. It is doubly ironic that these people are suffering in a recession caused by those at the top of the social and income ladder, most of whom have been spared the worst and many are even prospering. Clearly, the poor are paying for the sins of somebody else!

Consider these three graphics from the impact of the Great Recession on the American society. People with a four-year degree — who have an unemployment rate of just 4.3 percent — are barely experiencing an economic downturn. It should come as no surprise that not only were the least educated most vulnerable during the plunge into recession but also the least successful during the recovery. In fact, those with the best education levels enjoyed an increase in employment rate during the recession. 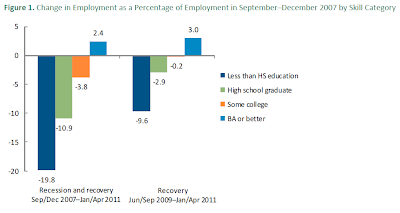 Among all industries, those with lower than high school education performed much worse than those at the higher end. 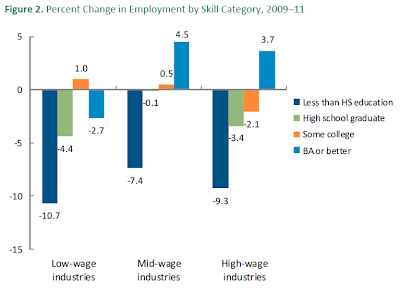 This graphic captures the magnitude of the disparity 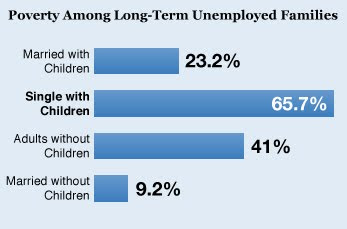 A more rational analysis would explain this irony as the natural order of things in a modern economy. Not only are those at the lower end of income ladder more vulnerable to recessions and slowdowns, they are also among the least likely to benefit from any booms or upturns.

For a start, those at the lower end of the income ladder obviously do not have the wealth to cushion them from any dips in their incomes, just as those at the other end can draw down from their pots. But more critically, the dynamics of modern economies - education-premiums, skill-bias etc - militates against those initially disadvantaged or under-privileged. A form of Mathew Effect - "For to all those who have, more will be given, and they will have an abundance; but from those who have nothing, even what they have will be taken away" - is a distinguishing characteristic.

Therefore, as economies globalize, the case for a strong, universal, and dynamic social safety net becomes ever more relevant. People are more exposed, often directly, to global economic forces, many of which may adversely affect their livelihoods and push them into poverty or deepen their existing poverty-stricken condition. Further, unlike earlier times when economic mobility was mostly upwards and at a slower pace, such mobility is becoming increasingly rapid and also involves two-way movements.

In the circumstances, if economies are to cushion their vulnerable sections of population to the vagaries of these global economic forces, a social safety net should be a priority. This comfort is also necessary to increase the political acceptability of policies that involve trade liberalization and making labour markets more liberal and flexible.

The dynamic nature of these changes in income status also means that increasingly social safety entitlement programs should have an automatic entry and exit provisions. Those who suddenly fall into poverty (by say, an easily identifiable event like job loss or migration back into his village etc) should be able to avail of the social safety benefits just as those who experience an increase in incomes should drop-off. This automaticity, like with unemployment benefits in the US, will minimize the role of governments, with all its political dimensions, and make these programs more efficient and less distortionary.

At some time, when Aadhhar becomes more universal, and integrated national databases are available, it may be possible to have such dynamic poverty programs in India too. For example, those who get a government job could be declared ineligible for food rations with immediate effect. This will address one of the current biggest problem with entitlement programs in India - absence of sunset clauses.
Posted by Urbanomics at 6:13 AM

Exclusion from benefits can be implemented as well without waiting for aadhar. Taking the example of govt servants, requiring an affidavit and threat of civil and criminal action for false affidavits, will bring all and sundry into line,