China and US - Contrasting paths to structural imbalances?

In many ways, China and US are classic examples of how both free-market capitalism and statist capitalism, through contrasting routes, have produced severe macroeconomic imbalances that have brought the later to its knees and threatens the former. The graphic below insightfully captures the respective problems of the American and Chinese economies. 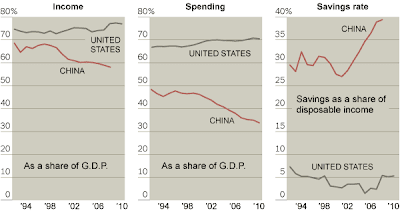 It was unbridled financial market liberalization and sustained expansionary monetary policy, which fuelled massive property and financial asset bubble and debt-financed household consumption binge, that is the source of much of America's current woes. Notional household income share of the GDP rose on the face of the twin bubbles. Households spent as though there was no tomorrow, running savings down to the bottom. Finally when the bubble burst and the recession took hold, households faced the brunt of the slowdown and even after four years, recovery remains uncertain.

In China, the policies enacted in late nineties, in response to bankruptcy problems facing state-owned companies and banks, looks set to have much the same impact in not the distant future. Beijing assumed tighter control over interest rates and exchange rates, keeping them artificially low to finance cheap loans to businesses and government agencies and increase external competitiveness so as to drive its preferred export-led and infrastructure investment driven economic growth model. This period also coincided with the government abandoning the communist era policies of life-long employment and liberal social safety nets, thereby forcing households to increase their savings to meet educational, health care and housing needs for themselves and their children.

These policies amounted to a huge transfer of wealth from the households to businesses, both government and private, and government agencies. Banks and state-owned companies staged excellent recoveries. But all this was at the cost of households - household consumption, already among the lowest at 45%, fell to just 35%, and savings rate rose sharply to about 40%.

As the Times and the FT point out in two excellent essays, this model worked well so long as the export markets were vibrant and the infrastructure deficit was filled, and the government was able to control the supply and price of credit and thereby keep cost of capital artificially low. As the two primary growth drivers weaken, as is happening now, and the unregulated shadow banking system assumes an increasingly dominant role (it now supplies more credit to the economy than the formal banking system) thereby weakening Beijing's ability to control credit, the sustainability of this growth model becomes doubtful. The sliding property market which financed a major share of the investment spending, especially by local governments, is yet another source of concern.

George Magnus writing in the FT has this to say about China's rebalancing strategy from an investment-centric and credit hungry model to one built around consumption,

"It involves a redistribution of income from capital and profits to labour and wages; radical changes in the role of the exchange rate, interest rates and capital markets; and strategies to counter the high propensity to save by households, corporates and central government. It is also politically divisive because power and economic privilege have to be wrested from party elites, state enterprises and banks, and given to new beneficiaries such as private companies, households, college graduates and rural migrant workers."

It is increasingly inevitable that China can sustain its high growth rates only if its domestic consumers can step into the space being vacated by the traditional growth engines. The question is whether Beijing has the stomach to embrace the required structural reforms to enable this transition?
Posted by Urbanomics at 6:44 AM