There is very strong evidence to claim that supply constraints in foodgrains are driving inflation in India. However, the RBI has preferred to tighten the monetary policy on the grounds that uncontrolled headline inflation would unleash inflationary expectations that would spill-over into the economy.

In this context, Paul Krugman has an excellent post that compares the headline and core inflation in the US over a 40 year period. He finds that since the eighties, core inflation has remained more or less stable despite considerable volatility in headline inflation. 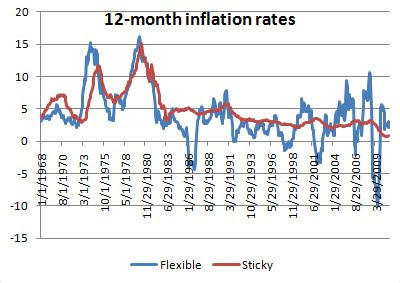 Krugman argues that the prices of food and fuel may rise or fall by double-digit amounts over the course of a year, then quickly reverse that rise or fall, whereas those of services (and most wages) and manufactured goods are set for periods of months or years. The latter are slow to develop inflation, but also slow to give it up, which is why policy should focus on whether those prices have started to rise too fast (or too slowly).

He also refers to the works of Edmund Phelps who thought that "wages were set mainly in reference to other wages, implying that swings in oil or wheat prices were largely irrelevant to the story". Krugman agrees with Pehlps - "if we think of wages as the ultimate core price, I don’t see any mechanism in today’s America whereby rising commodity prices translate into higher wage contracts."

However a comparison of similar sticky and flexible inflation in India yields different results. In fact, the wholesale price inflation (WPI) for manufactured products shows considerable volatility and mirrors the changes in WPI for primary articles, albeit at lower amplitude. 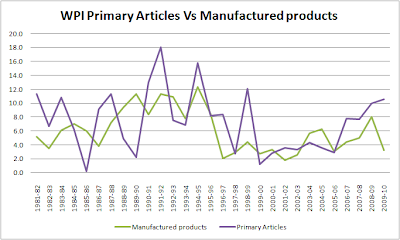 This does raise questions about whether we can conclude, in the Indian context, as Phelps and Krugman that the prices of manufactured goods are set largely in isolation from the changes in primary articles. There is a relationship between the volatility in primary articles and manufactured products which cannot be ignored. This also means that inflation expectations are not as firmly anchored in India, as in more developed economies like the US.

There is surely a greater role for monetary policy in such circumstances, though it is debatable as to what are its boundaries.
Posted by Urbanomics at 6:44 AM