Where did the "welfare dividend" go?

The Times of India reports that the NREGS program in Andhra Pradesh appears to have an unintended side-effect - "a record rise in the consumption of Indian Made Foreign Liquor (IMFL) among poor rural families, all thanks to the unprecedented sums of money that the scheme placed in their hands". This is borne out by record increases in liquor sales and illegal liquor outlets in the rural areas of the state in the past two years and the recent windfall returns from auctions of licenses to run liquor shops.

Over the past few years, the Government of Andhra Pradesh have introduced a series of welfare measures to benefit those below the poverty line (BPL). They include NREGS wage employment (Rs 135 per day), farm loan waiver, rice for Rs 2/kg, essential commodities at very cheap prices, free tertiary health care for all BPL families, scholarships for students from economically weaker sections, housing for all, free electricity for farmers and so on. They have been in addition to a virtual ban on raising water, sewerage and electricity tariffs and property taxes.

The net result of all this has been an increase in the disposable income available with these households, the "welfare dividend". This increase in disposable income has come from two sources - money saved from traditional expenditures on food, education, health care, and housing (due to the new schemes); and the fall in the relative prices (relative to the incomes, which have been rising) of civic services like water, electricity, and municipal taxes. This is in addition to the regular increases in income that comes with time. Where did all these savings go? 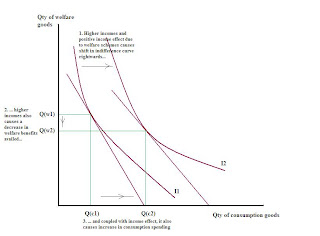 Let I1 be the indifference curve between two sets of goods - welfare goods and consumption goods. Thanks to increased incomes and income effect due to expanded set of welfare services/goods, the indifference curve shifts outwards to I2. Since welfare goods are inferior goods (whose consumption comes down as income rises), its uptake falls marginally (the income elasticity of uptake of welfare goods is small, since people retain many of the benefits despite increases in income) from Q(w1) to Q(w2). And consumption goods being normal good, their intake increases from Q(c1) to Q(c2), buoyed by the amounts saved from having to now spend less on those goods and services covered under the various welfare programs of the government.

The moot point is where did the "welfare dividend" go? Did it get spent on temptation goods like liquor or in capital investments and savings? The findings would make for a fascinating study and have important implications for public policy.

Update 1 (18/6/2010)
See Niranjan's superb op-ed that calls attention on the need for public policy to account for the behavioural decisions of individuals.
Posted by Urbanomics at 5:38 AM

The news story you referred to is damn absurd. It was a totally concocted and cooked up story. Even if the disposable income has increased, one would tend to spend the extra money on purchasing household items or enjoying through other means. It's only a meager per centage (could be less than five) that would waste the money on liquor consumption or such vices. The contention of the government that increased income levels has contributed to spurt in liquor sales appears totally unfounded. There is no answer when asked what is the basis for this misplaced assumption.
Having said this, it will be really very interesting if some organisation actually conducts a survey on this aspect and then draw some conclusions. It will be good for the society and the government as well.