US and Europe - different fiscal challenges?

The build-up to the G-20 summit has featured an interesting trans-Atlantic debate on the relative merits of continuing with or exiting the expansionary fiscal and monetary policies of the past three years.

President Obama has cautioned his colleagues against any premature exit from stimulus spending. However, the "austerians" appear to have won over in Europe, with the new British government already announcing unprecedented spending cuts and tax increases in an emergency budget.

Stephen Gordon's graphic that highlights the relative changes in the employment rates between US and European economies over the last three years may carry some relevance in this debate. The US stands as the clear outlier among the major western economies in the extent of damage suffered by the labor market. 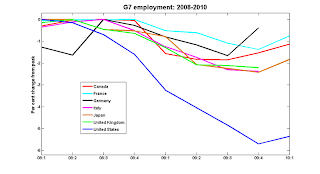 More than the anemic economic environment and weak growth prospects, it has been the sharp increase in the unemployment rate and the lack of any signs of a quick return to normalcy in the job market that has been the most important argument in support of continuing the expansionary policies. The labor market in the US has taken a much deeper hit than that of its European counterparts. To this extent, the amount of unemployed resources that need to be ploughed back into use through government intervention is far less amongst European economies than the US.

In this context, two other factors need to be considered. One, the lower baseline of unemployment rate and economic growth in Europe compared to the US means that the extent of stimulation required may be higher for the US. In other words, the US economy has deviated much more from its production frontier than the European economies, and would therefore require much more aggressive government intervention. Second, the European social security blanket and automatic fiscal stabilizers are much more generous and therefore more effective in cushioning those most adversely affected by the recession.

None of this is to support any fiscal tightening in Europe. Far from it, as the graphic below shows, the fiscal position of the major European economies is indeed better than that of the US. They have smaller primary deficits and require smaller fiscal adjustment to bring their public debts to within sustainable levels. This also means that they have greater fiscal space for stimulus spending than the US. 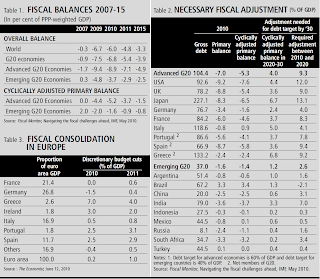 Continuation of the expansionary policies, atleast by the major economies of Europe, is important for both the world economy and (more importantly) the battered peripheral economies of Eurozone.
Posted by Urbanomics at 5:32 AM

Firstly, it would appear that the expansionary fiscal spending should be directed towards direct employment like in the NREGA program. All indirect means of improving the employments rates are slow and the not as effective.
Have we been able to define the limits of expansionary policies? Beyond which inflation takes over and makes programs ineffective.
Have we set limits up to which we can let the quality of life of citizens deteriorate?
Or do we lack such courage and wait for it to happen in any case.