After subjecting 19 of America's biggest banks to the most public scrutiny in decades, in the form of stress tests to reveal their ability to withstand further economic crisis and losses, federal regulators ordered 10 of them to raise a total of $75 billion in extra capital and gave the rest a clean bill of health.

The results of the stress tests (pdf here) comes as a relief to the financial markets given that the banks that came up short will have to raise far less than some investors had feared. Among the biggger banks, Bank of America will have to raise $33.9 bn, Wells Fargo $13.7 bn, Citigroup $5.5 bn, and GMAC $11.5 bn. The details of the additional capital required, potential losses and the area of these losses, for each of the 19 banks is available here. 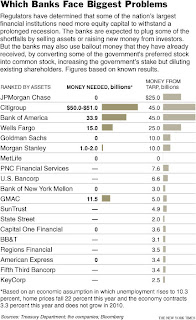 The stress tests (full paper here) were tailored to test the capital adequacy of these banks - would banks have enough capital if the recession proves deeper and loan losses larger than the current consensus expectation. The banks are being given two numbers, the total capital they need and how much has to be in the form of common stock, the strongest form of capital. The tests have been made under the assumption that unemployment touches 10.3%, home prices fall 22% this year, and the economy contracts 3.3% this year and does not grow next year. Under this worst case scenario, the results estimate that the losses by the 19 banks could total $600 billion this year and next, or 9.1% of the banks’ total loans.

The additional equity will have to be either raised privately (either by selling shares to the public or a big investor, or by selling some of their businesses, or by conversion of some of the privately held preferred stock to common stock) or from the government (by fresh equity injections or conversion of the existing preferred shares into common stock). The banks are eager to avoid having the government increase its stake drastically because that would dilute the holdings of the banks’ existing shareholders.

As Simon Johnson points out, the stress tests are a smoke-screen to let the too-big-to-fail banks "earn their way back to solvency through exercising their greater market power (Lehman and Bear Stearns are gone), government-subsidized debt (courtesy of the Federal Deposit Insurance Corporation), and various forms of implicit subsidy (through “legacy” loan removal programs)".

Update 2 (23/7/2010)
In an effort to reassure the markets and identify the banks with credit problems, 91 European banks were subjected to stress tests, in which all but 7 passed. To pass the tests, a bank’s Tier 1 capital, a measure of reserves, could not fall below 6 percent of assets in the face of a new recession and a sovereign debt crisis. The tests were the most extensive conducted in Europe, covering 65 percent of the total banking market and 20 countries from Ireland to Poland.
Posted by Urbanomics at 8:09 AM

This test is kept to see how the banks overcome their future crisis. Based on that they will know who is capable to get funds.Kalamazoo