Barry Eichengreen and Kevin O' Rourke find evidence to show that the world economy is faring worse than even the Great Depression of 1929-30. Consider these graphics

In contrast, the decline in US equity markets have been less steep in comparison to the global markets.

4. Central Bank discount rates (GDP-weighted average of central bank discount rates for 7 countries) - In both crises there was a lag of five or six months before discount rates responded to the passing of the peak, although in the present crisis rates have been cut more rapidly and from a lower level.

5. Money supplies (GDP-weighted average of 19 countries accounting for more than half of world GDP) - Monetary expansion was more rapid in the run-up to the 2008 crisis than during 1925-29, and the global money supply continued to grow rapidly in 2008, unlike in 1929 when it levelled off and then underwent a catastrophic decline.

6. Government budget surpluses (for 24 countries) - Though fiscal deficits expanded after 1929, it did so only modestly, whereas the willingness to run deficits today is considerably greater.

The comparison with Great Depression is appropriate since similar to the triggers now, the Great Depression was induced by an unsustainable real estate boom (centred in Florida), lax supervision and regulation, and global imbalances (known then as 'the transfer problem').

Update 1
Price Fishback lays out the stats to show why the current recession is far from being similar to the Great Depression.

Update 2
Great Depression in perspective, with respect to the decline in GDP. 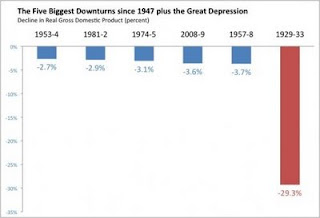 Update 3
Barry Eichengreen and Kevin O'Rourke have an update on the Great Depression Vs Great Recession debate. And their conclusion is - today's crisis is at least as bad as the Great Depression! They show that manufacturing production, exports and equity prices have fallen much steeply in Europe than in the US. Further, they also point to the important differences in monetary and fiscal policy responses during the two crises.

Update 5
Martin Wolf too weighs in.

Update 6
In the latest edition (August 2009) of the comparison of the present crisis with the Great Depression, Eichengreen and Rourke find that though the world industrial production, trade, and stock markets are now showing signs of recovery, the ongoing crisis is dramatic even by the standards of the Great Depression.

Update 7
Greg Mankiw has this nice post which examines as to what should be the yardstick for evaluating the extent of a recession.

Update 8
Barry Eichengreen and Kevin O' Rourke have the September 2009 update of the Great Recession compared with the Great Depression.

Update 9
Carlo Favero proposes a new, historically comparable measure of economic uncertainty to compare the Great Recession and Great Depression and finds that the evolution of uncertainty in this crisis has been much less dramatic than in the 1930s.

His measure of uncertainty is the spread between Moody's Seasoned Baa Corporate Bond Yield and Moody's Seasoned Aaa Corporate Bond Yield, available via the FRED database and the Federal Reserve Bank of St-Louis. The spread between bonds with the same maturity issued by firms with different credit ratings measures directly the premium that uncertainty commands in the bond market.

Update 10 (15/3/2010)
Barry Eichengreen and Kevin O'Rourke update their comparisons based on data from February 2010 and find that while situation has improved there is no room for complacency. They find that global industrial production now shows clear signs of recovering; though global stock markets have mounted a sharp recovery since the beginning of the year, the proportionate decline in stock market wealth remains even greater than at the comparable stage of the Great Depression; though the downward spiral in global trade volumes has abated, and the most recent month for which we have data (June) shows a modest uptick, the collapse of global trade, even now, remains dramatic by the standards of the Great Depression.

Update 11 (26/3/2010)
Minneapolis Fed assesses the present recession in comparison to the previous ones.
Posted by Urbanomics at 8:19 AM