The Congressional Oversight Panel set up by US Congress to monitor the $700 bn TARP bailout program has released a report which points to the government having substantially overpaid for its equity stakes in banks in the first phase of the $350 bn spent so far. In all, the panel estimated the Bush Treasury Department spent $254 billion to buy assets actually worth only $176 billion, effectively handing firms like Citigroup, Morgan Stanley and the American International Group a $78 billion subsidy. AIG was the largest recipient of the subsidy. In the 10 largest transactions made with TARP funds, for every $100 spent by Treasury, it received assets worth, on average, only $66.

Interestingly, even as government investments were losing heavily, private investments by Warren Buffet, Qatar Holdings, and Mitsubishi UFJ Financial in much the same distressed banks, and some even made at the same time, made handsome returns. The graphic below sums up the story nicely. 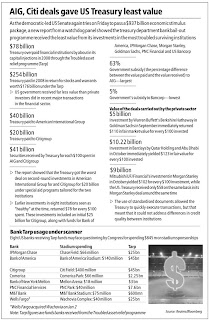 The performance of the private investments in these ailing financial institutions lends credence to the reasoning behind the new Treasury Secretary Tim Geithner's revised proposal on the TARP bailout seeking to incentivize private investors to invest in the banks by offering guarantees on declines in asset values below a certain level or floor levels to asset values. By trying to bring in private sector buyers to set prices for the distressed assets, and to take some but not all of the risk that the asset value will continue to decline, they hope to restore confidence in the banking system without making the costly direct cash infusions into toxic asset ridden banks.

Update 1
Johannes C. Stroebel and John B. Taylor (pdf here) examined the quantitative impact of the Federal Reserve’s mortgage-backed securities (MBS) purchase program and find evidence of statistically insignificant or small effects of the program.
Posted by Urbanomics at 9:59 PM

The information of this blog is very useful for everyone,that helps you which money card is beneficial for money by using prepaid currency card.